The U.S. ambassador to the European Union and million-dollar Trump donor told Congress how he and other senior U.S. officials repeatedly asked the Ukrainian government to open two specific investigations in order to secure an Oval Office meeting with Trump. When military aid to Ukraine was frozen in July, Sondland said he believed Ukraine’s newly elected President Volodymyr Zelensky would have to publicly agree to those investigations before U.S. security funds would start flowing again.

Sondland is not a low-level member of the President’s staff. He isn’t a career bureaucrat. He’s a wealthy businessman plucked for a prime overseas post who Trump seemed to consider a peer. Sondland said he spoke on the phone with Trump about 20 times and the two would often use chummy, profanity-laced banter. He described working at the “direction of the President” with Trump’s personal lawyer Rudy Giuliani to urge Ukrainian officials to investigate the 2016 election and Burisma — the Ukrainian energy company of which Joe Biden’s son formerly sat on the board.

“Mr. Giuliani’s requests were a quid pro quo for arranging a White House visit for President Zelensky,” Sondland told House investigators during his opening remarks. When he discovered in July that military aid had been frozen without a declared reason, Sondland concluded that was also linked to the pressure campaign. He said, “In the absence of any credible explanation for the suspension of aid, I later came to believe that the resumption of security aid would not occur until there was a public statement from Ukraine committing to the investigations of the 2016 election and Burisma, as Mr. Giuliani had demanded.”

And Sondland repeatedly emphasized he wasn’t acting alone. “Everyone was in the loop. It was no secret,” Sondland said. Sondland told Democrats about other documents the State Department has withheld that could bolster his account and show who else was aware of the President’s demands. Then he named names. He said several times that Secretary of State Mike Pompeo was aware of the conditions for a White House meeting, and also said Acting Chief of Staff Mick Mulvaney, former National Security Adviser John Bolton, and Vice President Mike Pence were aware of the White House demands that had created a logjam in U.S.-Ukrainian relations.

The eyewitness account from someone at the center of Trump’s team on Ukraine bolstered the Democrats’ case that Trump dangled a White House meeting and froze military aid to pressure the Ukrainians to launch investigations that could benefit Trump politically. Democrats likely have the votes to formally impeach Trump in the House.

“This obviously has been one of those bombshell days,” Ken Starr, the former independent counsel who led the impeachment investigation against Bill Clinton, said on Fox News. Sondland likely gave Democrats enough to begin drafting articles of impeachment, including on bribery, Starr said, adding: “There will be articles of impeachment. I think we’ve known that. I think it was just confirmed today.”

But the true impact of Sondland’s account will come from whether it sways Senate Republicans who are Trump’s protective firewall from being removed from office and have largely remained loyal.

President Trump downplayed his relationship with Sondland. “This is not a man I know well,” Trump told reporters as he left the White House for a trip to Texas to visit a tech factory. “He seems like a nice guy though.” Trump read to reporters from notes written in thick black marker, reenacting his part in a phone call on which Sondland asked Trump what he wants from Ukraine: “I want nothing. I want nothing. I want no quid pro quo. Tell Zelensky, — President Zelensky — to do the right thing.”

Many White House officials, a number of whom spent part of the morning huddled around television screens in the West Wing watching Sondland speak, were surprised by how starkly Sondland characterized Trump’s demands in his opening statement. But by the afternoon, White House officials felt the Republican’s questioning — in particular a cross examination by Ohio GOP Rep. Mike Turner — was able to show that some of Sondland’s testimony was based on assumptions and guesses he was making about what the President wanted. Sondland acknowledged to Turner he was “presuming” that the aid to Ukraine was held up to pressure Ukraine to launch the investigations Trump wanted. Sondland acknowledged that Trump had never told him personally that was the case.

“He’s out there making lots of presumptions,” a White House official said about Sondland. “We’re going to wait until the dust settles until we will find out if there is really something to be concerned about with this guy.”

On Thursday, the House expected to hear testimony from State Department official David Holmes, who overheard Trump mention investigations into Biden during a loud, potty-mouthed phone call between Trump and Sondland at a restaurant in Kiev, as well as former White House Russia expert Fiona Hill, who worked for Bolton and was an eyewitness to wrangling among top officials over linking U.S. military aid to Ukraine’s investigations. By the time any dust settles, the President may already be impeached. 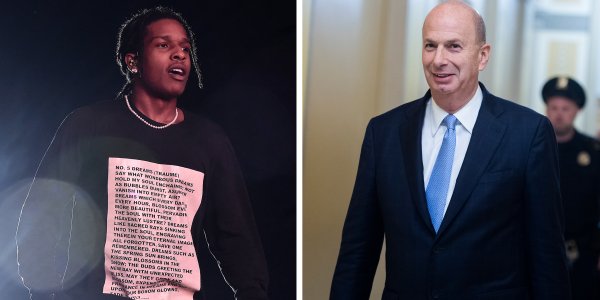 A$AP Rocky Comes Up In Impeachment Hearings
Next Up: Editor's Pick