Ukraine Wants to Probe the Company That Paid Hunter Biden. But It's 'Too Sensitive'

One of the troubling questions at the center of the impeachment inquiry, at least for Republicans, has been the work that Hunter Biden did for Burisma, one of Ukraine’s largest gas companies, while his father was serving as Vice President. But the intensity of interest in Washington is only making it more difficult to resolve the mystery.

To this day, Burisma’s connection to Hunter Biden has made it much harder for Ukrainian authorities to investigate the company for corruption, current and former officials in Ukraine tell TIME. In that sense, Burisma is still getting its money’s worth for the reported $50,000 per month it paid the younger Biden to sit on its board from 2014 until earlier this year.

Ukraine’s government insists that it has no evidence of wrongdoing by Hunter Biden or his father. But Burisma, they say, is a different story. Since taking office in May, the government has sought to explore past claims of corruption against Burisma and its owners. Yet, as an unintended consequence of the impeachment inquiry, Ukraine has felt the need to treat the company with kid gloves.

“It’s too sensitive a topic,” says an official in Kyiv, who would only discuss the company’s case on condition of anonymity. “I think that we need to investigate Burisma. Not for Trump. And not against Biden. We need to do that because this is just a case of corruption,” says the official, who is familiar with the thinking of Ukrainian President Volodymyr Zelensky. But the impeachment inquiry has “changed the context” around alleged corruption at Burisma, adds the official. “And this is bad.”

The case of Burisma cuts to the heart of the Republican defense of Trump. The President and his allies have insisted that the Bidens acted corruptly to shield the company from prosecution in Ukraine. The former Vice President, his son and their supporters have strenuously denied these allegations, and there is no evidence that Joe Biden’s decisions were ever influenced by his son’s involvement with Burisma. But the treatment of that company in Ukraine suggests that the role of Hunter Biden continues to affect the handling the company’s case, prompting the new government of President Zelensky to weigh its approach to fighting graft with particular care, especially when it comes to the country’s notoriously corrupt gas sector.

“We don’t know how major players in the United States would turn any statement” on the issue of corruption, says Bohdan Yaremenko, a senior lawmaker in the ruling party of President Zelensky. “If we would try to make an emphasis on this issue right now, we would sound like we are trying to contradict President Trump and Republicans,”

The sensitivity around Burisma also came up during impeachment hearings this week. In his testimony on Tuesday, Kurt Volker, the Trump Administration’s former special representative in Ukraine, said he urged the Ukrainian government not to give Burisma any special treatment because of its connection to Hunter Biden. “What I was trying to do in working with the Ukrainians was to thread a needle,” Volker testified. He encouraged the government to investigate corruption at Burisma without getting tangled up in Trump’s allegations of corruption against Joe Biden and his son. “If there was a way to thread that needle, I thought it was worth the effort.”

Ukraine is still trying to thread that needle, and having a very hard time of it.

Since taking office this summer, the government’s new prosecutor general, Ruslan Ryaboshapka, has initiated a wide-ranging review of many old corruption cases, looking for signs that they were closed under suspicious circumstances. He has also forced prosecutors to undergo a series of examinations meant to test their competence and integrity. “There were many, many cases which were buried by my predecessors,” Ryaboshapka said in an interview on Nov. 13 with the Kyiv Post.

But Ryaboshapka’s statements have reflected the tension involved in reopening of Burisma. In the Kyiv Post interview, the prosecutor general said that some of these cases being reviewed involved the co-founder of Burisma, a former Ecology Minister named Mykola Zlochevsky. In a separate interview on Nov. 5, however, the prosecutor general said there is no case against Burisma: “It exists only in the mind of the person who made it up.”

In a ranking of Ukraine’s wealthiest oligarchs put out last month by Novoye Vremya, a popular weekly, Zlochevsky was in tenth place, with an estimated fortune of $686 million, up 8% in the past year.

Burisma and its founder have come up repeatedly during the House impeachment inquiry. During his testimony on Nov. 13, George Kent, the official who oversees Ukraine policy at the State Department, alleged that Zlochevsky had been involved in “self-dealing” during his tenure as ecology minister between 2010 and 2012. “He used his regulatory authority to award gas exploration licenses to companies that he himself controlled,” Kent told the inquiry. “That would be considered an act of corruption in my view, yes.”

Zlochevsky has denied accusations of corruption and self-dealing. He did not respond to requests for comment sent to him through his company this week. The office of the general prosecutor declined to make Ryaboshapka available for an interview, citing his busy schedule.

During a press conference in Kyiv on Wednesday, Ryaboshapka told reporters that there are more than a dozen criminal cases in Ukraine that involve Zlochevsky or his company. They will all be reviewed in due course, he added.

Ignoring them is not much of an option for Ukraine. “We cannot not investigate it just because it will benefit Trump or hurt Biden,” says the official, who believes, “It’s a case of corruption.” But given how radioactive the Burisma case has become in Washington, the government is not eager to pursue it in the midst of the U.S. presidential race. “We can do it after the elections,” the official tells TIME. That might be one way to thread Volker’s needle. 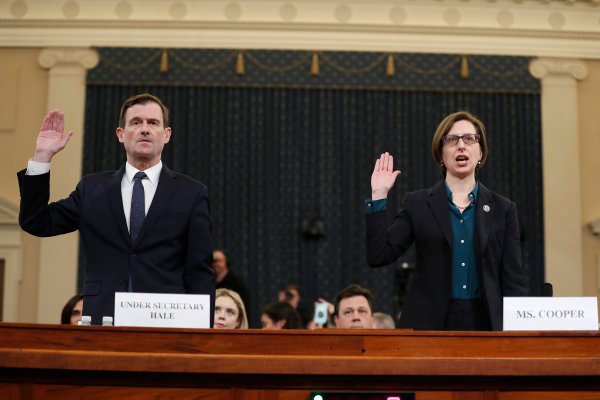 Sondland: 'Mr. Giuliani’s Requests Were a Quid Pro Quo'
Next Up: Editor's Pick