4 Killed, 6 Injured in ‘Targeted' Shooting at Backyard Party in California. Here’s What to Know

By Billy Perrigo and Josiah Bates

Four people are dead and six more have been injured in a mass shooting at a backyard party in Fresno, California, police said Sunday evening.

No suspects have been identified, and police said multiple shooters were still on the loose.

“This was a gathering, a family and friend gathering in the backyard,” Lt. Bill Dooley of the Fresno Police Department told reporters at the scene on Sunday. “Everyone was watching a football game this evening, when unknown suspects approached the residence, snuck into the backyard and opened fire.”

It is the third mass shooting in California in less than a week. It follows a school shooting in Santa Clarita that left two students dead, and a domestic violence incident in San Diego, in which a father shot his wife and four children before turning the gun on himself.

How the Fresno shooting unfolded

The shooting occurred shortly before 8 p.m. local time at a family home in east Fresno, where some 35 people had gathered for a family party and to watch football.

Police said at least two gunmen snuck into the backyard and opened fire on people before fleeing the scene. There were around 16 male adults in the backyard watching football.

“Witnesses described only seeing flashes of light from the weapon,” Fresno police chief Andrew Hall said at a Monday press conference. “It was too dark on that side of the house to see the suspects.”

After the shooting, the suspects fled on foot, according to Chief Hall.

Authorities said that Fresno police received multiple 911 calls and when they arrived on scene they found “several individuals deceased in the backyard.”

Police later confirmed that four victims, all men, had died. Three died on the scene. The fourth died from his injuries at a local hospital.

Another six, also all men, were transferred to a local hospital after being treated on scene by a triage unit.

All the victims were shot outside the house, police said.

Police said that, as of Monday, they had no leads on the identities of the shooter. Police said that the scene was now stable, and that they were going from door to door seeking witnesses and surveillance camera evidence.

“This was a mass casualty shooting, there’s no doubt about it,” Dooley said.

At Monday’s press conference, Chief Hall said that the victims were all males and were ages 23, 31, 38 and 40. All except for one were Fresno residents.

The names of the victims were not released by the police.

What we know about the shooter(s)

According to Chief Hall, the shooters appeared to be deliberate in their attack.

“This was not a random act,” Chief Hall said. “It appears that this incident was a targeted act of violence against this residence.”

The chief also said they are investigating leads and that they have information that some people at the party were involved in a “disturbance” earlier this week.

Hall speculated that the incident is tied to “Asian gang-related violence,” and said that an Asian gang task force has been formed to find the shooters and preventing any retaliation.

He made it clear, however, that there was no indication that anyone at the residence has gang ties.

How the community has responded

Fresno is located in central California, about 220 miles north of Los Angeles, and is a diverse area that’s home to more than 70 ethnic groups. The home targeted in the shooting is believed to be owned by members of Fresno’s Hmong community.

Calvin Gatison, who lives on the block where the shooting happened, told the Associated Press that the street is usually very peaceful but that there have been two shootings in the area in the past couple of weeks.

“For something like this to happen in a quiet neighborhood, it scares you,” Gatison said, according to the AP. “This is the third shooting I’ve heard since the middle of September.”

Write to Billy Perrigo at billy.perrigo@time.com and Josiah Bates at josiah.bates@time.com. 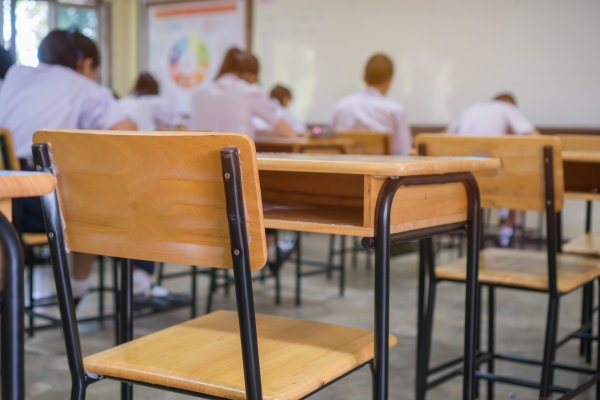 3 Former Employees Charged Over 13-Year-Old Autistic Student's Death After Being Restrained at California School
Next Up: Editor's Pick