'It's Going to Be Hard to Forget,' Students Describe Chaos and Horror of Santa Clarita School Shooting

By Mahita Gajanan and Abby Vesoulis

Students are describing the chaos and horror that spread after two teenagers were killed in a mass shooting at Saugus High School in Santa Clarita, Calif. on Thursday.

One student, Micha Turner, told CBS she had just arrived at the school’s quad when she heard gunfire.

“I just saw him fire one, two, three. I just saw a body fall. My first instinct was to get out of there and to find my sister,” Turner said in an interview that aired Friday morning. “His face and just seeing that one person fall — it’s going to be hard to forget. I’m going to have to live with that sight in my head.”

A 15-year-old girl and a 14-year-old boy — both students at the high school — died after the suspected gunman, a 16-year-old male student, opened fire in the school’s quad. (The 15-year-old had previously been identified as 16.) Three other people were injured in the shooting, Los Angeles County Sheriff Alex Villanueva said at a news conference Thursday afternoon.

On Friday afternoon, the Los Angeles County Sheriff’s Department confirmed to the Associated Press that the shooter has also died, from a self-inflicted injury, at an undisclosed hospital “with his mother present.”

Christine Heffernan embraces her friend while waiting for her son, Alex Cox, 17, a student at Saugus High School, to arrive to the reunification center.
Hilary Swift

The shooting caused chaos at the high school, located about 40 miles north of Los Angeles, as students scrambled for safety amid the melee, and frantic parents urgently sought to reunite with their children.

“I just heard a lot of kids crying. We were scared,” Rosie Rodriguez, a freshman at the school who ran to a nearby home for shelter when the shooting broke out, told the Associated Press.

Here’s what to know about the shooting at Saugus High School.

How the shooting unfolded

The shooting happened around 7:30 a.m. local time, near the start of the school day, authorities said. Kent Wegener, captain of the L.A. County Sheriff’s homicide bureau, said police arrived at the scene to find six people suffering from gunshot wounds in the school’s quad area. The students were taken to a local hospital, where officials later discovered the shooting suspect was among those who had been injured.

During a Thursday afternoon press conference, an emergency services official indicated his team “treated, triaged and transported seven patients,” in total, but were well-equipped to do so, with “a total of 65 units.” Six victims were transported by ambulance, and one was transported by helicopter. One of the transported victims was not injured by gunfire, the official said.

Wegener said the suspected gunman was in the quad when he pulled out a .45-caliber pistol from his backpack and began shooting the other students before shooting himself.

A police officer on patrol at the reunification center.
Hilary Swift

Saugus High School and other schools in the William S. Hart school district were put on lockdown Thursday morning, though most of the lockdowns were lifted by the afternoon. Authorities began an immediate search for the shooter, and looked at the neighborhoods near the school, thinking the suspect ran away from campus after opening fire.

Local TV showed a chaotic scene at Saugus High School, as students were escorted out of the school and authorities spread around the campus to offer help. Several students said they were barricaded in classrooms while they waited for police to apprehend the shooter.

Shauna Orandi, a student at the high school, told the Associated Press she was working on homework in her Spanish class when she heard gunshots. Orandi said she told herself, “This is it. I’m going to die.” The AP reports she was later reunited with her father.

During a vigil on Thursday night to honor the victims of the shooting, Lea Reas told the AP her 14-year-old nephew, a freshman at the school, saw his friend get fatally shot.

“He lost it,” she said. “It’s something no kid should deal with.”

Parents were directed to Central Park on Bouquet Canyon Road to reunite with their children.

Brian Skiba, a parent of one of the students at the high school, told KCBS he reunited with his son at a meeting place they both have.

“My son was in the quad where it happened and as soon as he saw the shooting he ran, and we have a meeting space and he ran and I met him there,” Skiba said.

Two students died in the shooting, and three others were injured, not including the shooter. Police said a 15-year-old girl and a 14-year-old boy died after being transported to Henry Mayo Hospital. On Friday, the victims were identified as 15-year-old Gracie Muehlberger and 14-year-old Dominic Blackwell, per the AP.

During the Thursday afternoon press conference, a trauma surgeon at Henry Mayo Hospital released limited details about the patients treated at the California facility. “Trauma surgeons came in to back us up, and we were more than capable and available to operate on multiple victims today—which we did,” he said. He also reached out to those who were not hospitalized but may be trying to process trauma. “We need to remember there are more victims than the ones just in the hospital. There are families, classmates and the community, and we’d like to offer the hospital as a resource for these victims.”

Two other patients were treated at Providence Holy Cross Hospital and were reported to be doing well, doctors said Friday. The AP reports a 15-year-old girl and a 14-year-old girl were treated for their injuries and are recovering.

What we know about the alleged shooter

Police have not named the suspected gunman, although authorities said he was a Saugus High School student whose birthday was on the day of the shooting. The Associated Press identified him Friday as 16-year-old Nathaniel Tennosuke Berhow.

Police recovered a .45-caliber semiautomatic pistol from the scene with no bullets remaining.

Wegener told reporters that video footage caught the gunman firing the weapon in Saugus High School’s quad shortly after 7:30 a.m. After shooting five other students, the suspected gunman shot himself in the head.

The suspect was initially transferred to the hospital along with a group of other victims who were injured. Police did not say where the suspected shooter is currently being held, but authorities said the suspect’s mother and girlfriend were being interviewed by police.

Wegener said police had served a search warrant at a home believed to be the suspect’s residence. A motive was not yet clear, he said.

Wegener added that an Instagram account with a bio reading “Saugus have fun at school tomorrow” was linked to the suspected shooter. The Instagram bio was changed after the shooting by someone other than the gunman, Wegener said.

A spokesperson for Facebook, which owns Instagram, disputed the account’s link to the suspect in a statement to TIME. “We disabled this account for violating our policies,” the spokesperson said. “The account did not belong to the shooter.”

How the community has responded

Santa Clarita, where Saugus High School is located, is a relatively wealthy city of 200,000 people in Los Angeles County, with a median household income of more than $90,000.

Former Congresswoman Katie Hill, who graduated from Saugus High School in 2004, said that several volunteers and interns for her campaign attend school there.

Hill, who until recently represented California’s 25th district, which includes Santa Clarita, expressed anger about inaction in Congress on passing gun laws in a statement.

“I went to Washington to change things … And in the House, we did our job. Four different pieces of legislation passed in the House, with more on the way,” she said. “These bills would have saved lives — but they are not currently law because the Senate, led by Leader Mitch McConnell, refuses to even vote on these bills.”

Speaking with KCBS earlier Thursday, Hill said there were likely up to 3,000 people at the school during the time of the shooting. Saugus High School has more than 2,400 students.

“It’s a large school. It’s a difficult area to contain,” she said.

President Donald Trump tweeted his condolences to the families and friends of the victims.

Vice President Mike Pence called the L.A. County Sheriff following the shooting, according to a tweet from the sheriff’s office. In a tweet Thursday evening, Pence said the “hearts of every American” are with those affected by the shooting.

“Our children and communities are being terrorized,” she said. “We can’t accept this.”

California Gov. Gavin Newsom said he was following the shooting developments in a statement.

“I am closely monitoring the incident at Saugus High School in Santa Clarita this morning, and my Administration is working in close coordination with local law enforcement,” Newson said. “Jennifer and I extend our thoughts to the parents, families and friends of the students and faculty, and the Santa Clarita community.”

The actor Kristy Swanson, known for playing Buffy in the film Buffy the Vampire Slayer, said on Twitter that she knows two students who attend the high school, one of whom barricaded herself in a room. 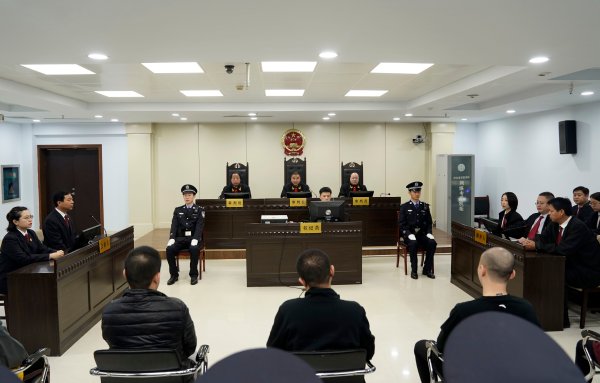 China's Conviction of Fentanyl Traffickers Is Unlikely to Stop Exports to the U.S.
Next Up: Editor's Pick