Fewer Americans Than Ever Are Smoking. Will Vaping Take Its Place?

A person smokes a Juul e-cigarette in Brooklyn on July 8, 2018.
Bloomberg—Bloomberg via Getty Images
By Jamie Ducharme

Tobacco use in the U.S. is changing, according to new data from the U.S. Centers for Disease Control and Prevention (CDC). The number of American adults who smoke fell to a new low in 2018, while e-cigarette use continued to climb.

About a fifth of American adults used some type of tobacco product in 2018, according to the data. Cigarettes were the most popular, used by 13.7% of adults. That’s a small decrease from 14% the year before, and another record low for the U.S., which has seen a two-thirds decline in smoking since 1965. Meanwhile, e-cigarette use rose from 2.8% of U.S. adults in 2017 to 3.2% in 2018. Use of smokeless tobacco also increased a bit (from 2.1% to 2.4% of adults), while cigar and pipe use remained essentially unchanged, at 3.9% and 1% of adults.

Clearly, traditional combustible cigarettes are still much more popular than e-cigarettes, which heat and vaporize liquid nicotine rather than burning tobacco. About 34 million American adults smoke cigarettes, while only about 8 million vape. Nonetheless, the data shows a clear trend: more Americans are ditching cigarettes, and more are picking up alternative tobacco products, thanks in part to massively popular companies like Juul.

Whether the people beginning to vape are also the ones quitting smoking is the million-dollar question. Proponents say e-cigarettes are less dangerous than cigarettes because they contain fewer carcinogenic substances and produce fewer harmful byproducts than cigarettes—but they still come with health risks, as demonstrated by the ongoing outbreak of vaping-related lung injuries and a growing number of studies suggesting they’re associated with heart and lung diseases. If people who currently smoke traditional cigarettes switch to vaping, they could theoretically reduce their risk of smoking-related diseases like cancer, though that conclusion is still the source of debate; but if a non-smoker picks up vaping, they’re almost certainly worsening, or at least threatening, their health.

It’s not possible to say, based on the CDC’s survey of about 25,000 adults, whether the 55% of smokers who tried to quit, or the 7.5% who reported recent success, in 2018 did so using e-cigarettes. There’s conflicting research on how well e-cigarettes actually work for smoking cessation, but many smokers report personal success using them. A study published in January found that, among a small group of smokers who used e-cigarettes every day, 11% were able to abstain from cigarettes, compared to about 6% of non-vapers.

Despite the unknowns, it’s clear that the way Americans think about and use tobacco is changing. There’s no better indicator of that trend than young people.

In September, the Department of Health and Human Services released preliminary data from the 2019 National Youth Tobacco Survey. It showed that 27.5% of high schoolers had vaped in the past 30 days in 2019, up from 20.8% the year before. Meanwhile, teen cigarette-smoking rates dropped from 8.1% to 5.8% in the same time period. Young adults are also more likely than older adults to vape—about 7.6% of Americans aged 18 to 24 did so in 2018, according to the CDC.

Cigarettes are on their way out, fulfilling years of concerted public-health work. But something new may be rising up to take their place—and no one knows whether that’s a good thing. 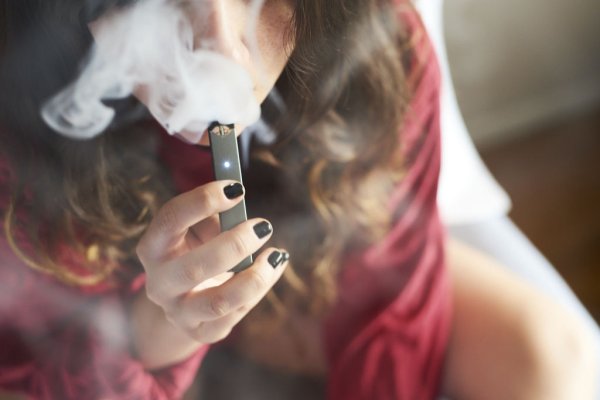 Juul Once Looked Too Big to Fail. Lawsuits and Federal Regulations Are Changing That
Next Up: Editor's Pick