DACA plaintiffs leave the United States Supreme Court, where the Court is hearing arguments on Deferred Action for Childhood Arrivals that could impact the fates of nearly 700,000 young immigrants. on Nov. 12, 2019, in Washington, D.C.
Jahi Chikwendiu—The Washington Post/Getty Images
By Katie Reilly

Karen Reyes found herself on Tuesday at the center of a raging national debate over immigration — sitting inside the U.S. Supreme Court, as nine justices weighed the fate of about 700,000 young immigrants like her.

“It was amazing to be in there, taking up space where historically, [there] probably have not been so many undocumented people of color,” says Reyes, 31. “But it is surreal to have nine justices deciding your fate and then having lawyers fight for you. And at the end of the day, a court isn’t going to tell us that we deserve basic human decency.”

The Supreme Court is set to decide whether the Trump administration can shut down the Obama-era Deferred Action for Childhood Arrivals program (DACA), which protected certain young undocumented immigrants from deportation and allowed them to work legally, without providing them a pathway to citizenship. The program was meant to help immigrants under the age of 31 who were brought to the U.S. illegally as children, below the age of 16.

Trump rescinded the program in 2017 and said it was an example of executive overreach, sparking lawsuits that have now reached the Supreme Court.

Reyes—a DACA recipient and pre-kindergarten teacher from Austin, Texas—traveled to Washington, D.C, to witness the oral arguments in person on Tuesday. The court room was smaller than she expected for a building that’s so imposing from the outside. She was happy to see Justice Sonia Sotomayor in person, “another woman of color who isn’t afraid,” who questioned during the hearing why the Trump Administration had moved to rescind DACA after “telling DACA-eligible people that they were safe under him and that he would find a way to keep them here.” It was “surreal,” Reyes says, to hear attorneys and justices debate legal intricacies that will affect her future.

During Tuesday’s oral arguments, the Court’s conservative majority appeared poised to rule in Trump’s favor— a decision that would affect the ability of young undocumented immigrants to work legally and pursue higher education.

Attorneys for the Trump Administration argued that DACA was unlawful and that the Department of Homeland Security had a right to end it. “DACA was a temporary stopgap measure that, on its face, could be rescinded at any time. And the Department’s reasonable concerns about its legality and its general opposition to broad non-enforcement policies provided more than a reasonable basis for ending it,” Solicitor General Noel Francisco said Tuesday.

But attorneys on the opposing side argued the government had failed to adequately consider how ending DACA would negatively affect hundreds of thousands of people, and needed to present a better reason for ending the program.

When the arguments were over on Tuesday, Reyes and dozens of other DACA recipients and their lawyers walked out of the Supreme Court together and marched down the building’s marble steps as a crowd of immigrants and activists chanted, “home is here.”

Melanie Cruz, a 19-year-old DACA recipient who was in that crowd, says she started to cry.

“That was very powerful. In the air, everyone could feel how heavy and how strong the community all felt together. We felt empowered. It was very emotional,” says Cruz, who came to the U.S. from Mexico with her family 15 years ago, when she was 4 years old.

“It was a moment where I felt like everybody kind of just stood paralyzed and we all kind of just cried and really felt each other’s pain, but we also felt a sense of community because we all know that we’re in this struggle together.”

Cruz traveled to Washington, D.C. from New Jersey this week to be outside the Supreme Court for a “moment that’s going to go down in American history.” A political science major at Bergen Community College in Paramus N.J., she emailed her professors to tell them she would miss her class on American government, called out of work and drove to the nation’s capital with her two siblings, who are also DACA recipients.

“These are the sacrifices we have to make in order to get our voices heard,” she says.

With DACA, both Reyes and Cruz have become used to planning their lives in two-year increments due to the timeline for DACA renewal.

Reyes, who was 2 years old when she came to the U.S. from Mexico in 1991 with her mother, received DACA status in 2012, when the program was announced by Obama. While her current work permit is set to expire in April, she just submitted her renewal form several months early, hoping it will extend her work eligibility to December 2021.

“I was trying to get it to expire around December, so if I’m unable to renew in the future, at least it’s a nice stopping point for my kids. Like ‘Oh, you know, Ms. Reyes won’t be back after Christmas holidays. Time to find a new teacher,'” she says. “You shouldn’t have to be in this position, planning your life two years at a time, and here I am planning the best way — in case I cannot renew — for my kids to not have a gap between teachers.”

If she loses her DACA status, Reyes expects she won’t be able to be a public school teacher anymore, but she plans to continue educating others, possibly through community organizing or know-your-rights trainings for immigrants. “Our undocumented community has been living here and thriving here for many, many years, and will continue to,” she says.

Cruz, who is on track to graduate with her associate’s degree in May, is currently applying to more than 10 four-year colleges, hoping to increase her chances of attending one where undocumented immigrants are eligible for financial aid. Cruz, who has had DACA status for three years, wants to become a lawyer to better advocate for her community, but if she loses her work permit, she doesn’t know how she would pay for law school or practice law someday. Those uncertainties make it difficult to study sometimes, she says.

“It’s very hard to plan for the future without knowing where we will be and where we will stand a year from now,” Cruz says. “What is my right if my working permit is removed? Why am I studying? Why am I doing all of this when, any time, that privilege can be taken away?”

If the Supreme Court allows the Trump administration to rescind DACA, it’s not clear how immediate the effects would be, says Jennifer Chacón, a professor focusing on immigration law at the University of California, Los Angeles School of Law. When the Trump Administration initially rescinded DACA, it included a six-month period to wind down the program.

“At a minimum, six months out, unless Congress acts … individuals who have their work authorization under DACA would lose those work authorizations and would not be able to work with legal authorization in the U.S.,” Chacón says. In some states, it will also affect DACA recipients’ ability to have a driver’s license or pursue an education, she says: “Whether people will be able to continue their studies without the realistic possibility of work is another question.”

In order to obtain DACA status, immigrants must pass a background check. And they’re not eligible for the program if they have committed a felony or significant misdemeanor, or if they’ve committed three misdemeanors of any kind. But President Trump criticized DACA recipients on Tuesday, falsely claiming that “some are very tough, hardened criminals,” and later falsely saying that “a very large proportion” of DACA recipients have arrest records. He appeared to be referring to U.S. Citizenship and Immigration Services statistics showing that, as of February 2018, 7.8% of immigrants approved for DACA had been arrested or apprehended. But the same federal statistics show that driving-related and immigration-related offenses account for 60% of those arrests.

“If Supreme Court remedies with overturn, a deal will be made with Dems for them to stay!” Trump tweeted Tuesday. But past efforts to reach a legislative agreement with members of Congress to protect young immigrants who were brought to the U.S. illegally as children have been unsuccessful during the President’s term thus far.

Regardless of what the Supreme Court decides, Reyes says she intends to keep advocating for the rights of all undocumented immigrants, not just those who have been protected by DACA thus far.

“It doesn’t matter which way the court goes,” she says. “We’re still going to be fighting for that.” 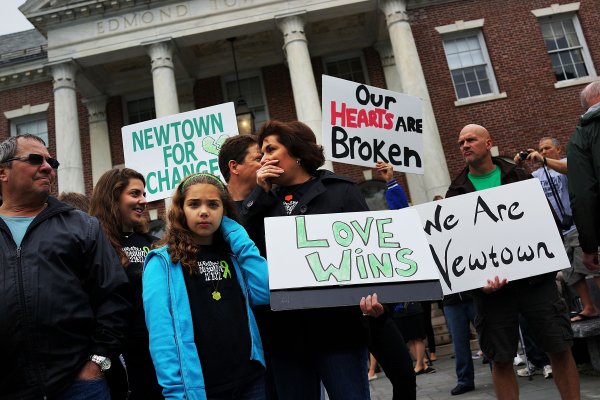