It’s no accident that the Democratic Party chose to host its first 2020 presidential debate in Miami. Florida is the nation’s biggest battleground, Miami is rich with Democratic voters, and the so-called “capital of Latin America”—a city where more than 70% of the population is Hispanic—offers an ideal venue to talk about immigration, an issue poised to be a centerpiece of the 2020 campaign.

Yet as the Democratic candidates rolled into Miami for the party’s first presidential debates, few arrived with detailed immigration policies in place. By the time they leave at the end of the week, they’re likely to have been tested on a range of thorny issues they have so far avoided.

Many Democratic candidates have leaned so far on denouncing President Donald Trump’s controversial immigration policies, like family separations and building a wall on the southern border, instead of putting out concrete proposals of their own. In Miami, where every twist in immigration policy is sharply felt, the usual talking points won’t be enough. In the communities the candidates will visit for town halls and campaign stops over the coming days, the finer details of visa paperwork, the immigration court backlog, and the fight over temporary protected status were realities of everyday life long before Trump.

Matt Barreto, co-founder of Latino Decisions and a political scientist at the University of California, Los Angeles, highlighted former Secretary of Housing and Urban Development Julian Castro, California Sen. Kamala Harris and former Texas Rep. Beto O’Rourke as the candidates who have signaled they are prioritizing immigration by releasing detailed policy blueprints.

“It’s taken as a given that you’re strongly opposed to the Trump administration’s immigration policies,” Barreto says. “The other candidates do need to get more specific about what they would do and how they would do it.”

Just 30 miles from the debate stage, in Homestead, Fla., is the largest detention center for unaccompanied minors in the U.S. Local Democrats have urged presidential candidates to visit the site, and at least three – O’Rourke, California Rep. Eric Swalwell, and activist Marianne Williamson – plan to do so this week. However, many immigration advocates say the conditions at detention centers are a humanitarian issue of its own, and simply using them as a backdrop to condemn Trump is not enough.

“Democrats have a unique opportunity there, because it is Miami, to go beyond the bread and butter issues,” Barreto says. “To not just be against family separation, but answer questions like ‘Do you have a TPS policy towards Venezuelans?’”

Most candidates have had to address the by-now familiar issues of Central American asylum seekers; what to do about the undocumented immigrants brought to the U.S. as children, known as DREAMers; and the need to overhaul the 50-year old U.S. immigration system. At the debates Wednesday and Thursday, which will be co-hosted by Telemundo, they’re likely to be pressed on less obvious subjects, such as the controversy over whether the Trump administration can add a U.S. citizenship question to the 2020 census, which the Supreme Court is expected to rule on this week.

Candidates may also be forced to take a stand on the often-conflicting issues that matter to South Florida’s Venezuelan, Puerto Rican and Cuban voters. “What about the Puerto Rican vote? They’re not going to forget that this administration abandoned them during Maria,” says Liz Alarcon, a Venezuelan-American Democratic activist. “But they won’t be giving their vote away for free. What about the 72,000 Venezuelans who could benefit from TPS?” she adds. “And I don’t see how we can have a debate in Miami and not talk about U.S.-Cuba policy.”

“Latinos are still seen as a monolith,” Alarcon says. “Politicians as a whole still don’t get it, and that’s a problem.”

In a bid to reach a key audience before the debates, former Vice President Joe Biden on Monday published an op-ed in the Miami Herald and El Nuevo Herald, in English and Spanish. Besides criticizing Trump’s inflammatory rhetoric towards immigrants and “ineffective” wall, he slammed the administration for “callously limiting the ability of Cuban Americans to reunite with and support their families in Cuba” and wrote that its “refusal to grant TPS to the thousands of Venezuelans fleeing persecution shows it cares little about the suffering of the people of that country.” Biden also touted his experience leading Latin American policy under the Obama administration.

But it is Castro, the only Latino running for president, whom immigration advocates identify as the candidate who set the bar by releasing a comprehensive proposal back in April. It would provide a path to citizenship for people in the country without authorization, revamp the immigration-court system to process asylum claims more quickly, increase aid to Central America to address the root causes of the crisis and shift some of ICE’s responsibilities to other agencies.

While the former Mayor of San Antonio is polling between 1% and 2%, his plan has prompted more prominent candidates to follow suit. Elizabeth Warren, for example, came out in support of some measures in his proposal, including repealing a decades-old law that criminalized unauthorized border crossings.

How Democrats handle immigration in Miami will be the first campaign test of how they position themselves on Trump’s signature issue. Florida Democrats worry that the longer the candidates wait to put out concrete immigration policies, the longer Trump can blast them for “ignoring” the real problems in the immigration system and paint them as extremists who simply want to “abolish ICE.”

It would be another missed opportunity for a party that has come to view Hispanic voters as a cornerstone of its coalition. Republicans’ tough talk on Venezuela and Cuba has historically tended to be a more effective campaign strategy in South Florida. For now, the city will be watching closely to see if Democrats have changed their approach. As an op-ed in the city’s biggest newspaper put it: “It seems as if Democrats will never learn how to campaign in Miami.” 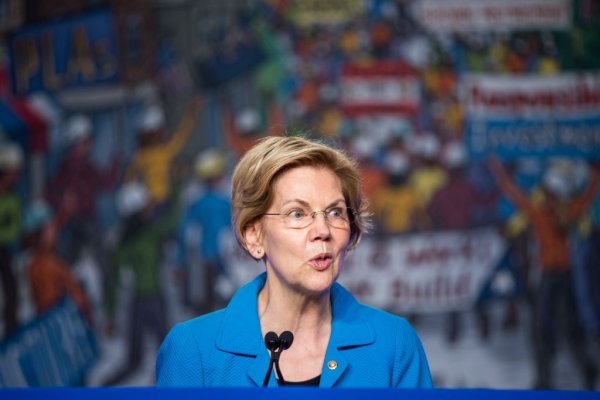 Elizabeth Warren Aims To Replace Every Single Voting Machine
Next Up: Editor's Pick