These Dreamers' Future in America Is in Doubt. But They're Headed to College Anyway

Demonstrators sing and hold signs during a rally supporting the Deferred Action for Childhood Arrivals program (DACA), outside the U.S. Capitol building in Washington, D.C., on Jan. 18, 2018.
Zach Gibson—Bloomberg/Getty Images
By Maya Rhodan

Applying for college can be stressful for any student, but Rosa Sanchez says her immigration status has made it worse.

As an undocumented immigrant brought to the United States as a child, Sanchez has been protected from deportation by the Deferred Action for Childhood Arrivals program, or DACA, which faces an uncertain future amid the Trump Administration’s pledges to wind it down.

“I saw my classmates and they were really excited,” the 18-year-old tells TIME. “I felt like something was being taken away from me.”

DACA has shielded some 700,000 undocumented immigrants, allowing them to attend school and take jobs, but DACA recipients are not eligible for federal student aid and their access to state- and college-based aid varies.

Despite being a leader in her California high school and one of the top students in her class, Sanchez struggled to grapple with the idea that she may not be able to attend school because she could not afford it. “I felt really hopeless and sometimes I really wanted to give up.”

Last week Sanchez found out she is one of 1,200 students who will gain a financial boost from TheDream.Us, the nation’s largest scholarship program for so-called Dreamers, a group that includes recipients of DACA and temporary protected status, a program designed for refugees.

TheDream.Us was launched to fulfill what the leaders thought would be a temporary need — after DACA was established under the Obama Administration, many believed Congress was making real progress toward immigration reform. But four years later, Dreamers are still in limbo, leaving TheDream.Us to continue providing scholarships, helping nearly 3,000 during the current academic year. This spring, 400 of the students they awarded in 2014 will be completing their college education.

The past few months have brought challenges to the population of immigrants known as Dreamers. Last September, the Trump Administration announced that DACA would be ending and gave Congress until March 5 to come up with a long-term solution. But in the time since, lawmakers have not passed any legislation that would offer them permanent protections.

Ongoing court battles have offered some reprieve — decisions early this year have allowed DACA recipients whose documents have expired to renew, which was not allowed under the Trump Administration’s decision to end the program. And last week, a federal judge ruled that if the government could not adequately explain why the program was ended in 90 days, those who have not been able to apply may be able to access the program. That could include some 23,000 young people the Center for American Progress estimates turned 15-years-old after Sept. 5, 2017.

Gaby Pacheco, who serves as TheDream.Us’s director of advocacy, development, and communications, says that after September, the organization braced for a drop in applications. “We were thinking, oh, this is really what’s going to deter people from going to school,” she says. “They’re probably going to use the last two years that they have to work and save money. They’re not going to even want to go to college.”

Instead, she says, a record number of students applied for their tuition scholarships this year, and, as a result, around 1,200 students will be awarded up to $29,000 to help them obtain a Bachelor’s Degree or $14,500 if they’re seeking their associate’s degree at one of TheDream.Us’s 76 partner schools. Nearly 200 students who live in states where they face unique challenges in getting an education — states where they would have to pay out-of-state tuition or are barred from attending public schools — will receive up at $80,000 to help them cover tuition, fees, housing, and food through the organization’s Opportunity Scholars program, says Pacheco.

“In the U.S. right now, I think one of the safest places for an undocumented student is on a college campus,” she says. Aside from the scholarship, TheDream.Us program also works to build cohorts of students on their 76 partner campuses that can support each other throughout their college experiences. But, Pacheco says, “that means when things are not necessarily going well for one of them, they all kind of feel it.”

The Trump Administration’s approach to immigration, generally, and DACA, specifically, have tested leaders at colleges and universities across the country.

Losing DACA protection puts a student at risk for deportation, but it also means that student is unable to work, putting their financial stability in jeopardy. Recently, it has become more difficult for students with DACA to afford college in some areas. In April, the Arizona Supreme Court issued a ruling that bars public schools from offering DACA recipients in-state tuition. For students at Arizona State University and Maricopa Community College, that means their tuition could nearly triple. Students from mixed-status families are also dealing with the prospect of their relatives facing deportation, which could contribute to anxiety.

“What we’ve tried to do is make it clear to our students that we will try to do everything we can within the law to support them in any way we can,” says James Milliken, the Chancellor of the City University of New York, a TheDream.Us partner which has one of the country’s largest university-based immigration counseling programs, which is available to students and non-students.

Some colleges have been trying to stave off the impact of the political climate. Before the president was even inaugurated, many colleges came out and declared themselves “sanctuary campuses,” meaning they would limit their cooperation with immigration enforcement. Around 700 college and university presidents signed on to a statement led by Pomona College urging lawmakers to uphold and expand DACA last fall. In December of 2017, more than two dozen college leaders launched the President’s Alliance for Higher Education and Immigration, to call for protections for Dreamers and solutions for other immigration-related issues on campus.

Milliken estimates that there are “thousands” of undocumented students at CUNY right now, though he says he does not have exact numbers because the school does not ask applicants about their citizenship. Right now about 720 TheDream.Us scholars attend CUNY schools and over 200 of this year’s scholars have been accepted, he says.

“These are talented, ambitious, hard-working students,” says Milliken. “They are the kind of people that we would want to have get an education and contribute to our communities and support their families and pursue their dreams.”

Liam Kande, 30, is another one of this year’s TheDream.US scholars. In high school, he says, he was eager to attend college and even took some pre-college courses during his junior year. But when he went to fill out a federal student aid form, he discovered that he was undocumented. Learning that, he says, was discouraging. “ I just thought, OK, I guess I’m just going to have to work,” he tells TIME. So he did and eventually, he found his passion and taught himself how to code.

“Now it’s my turn to live the dream that I thought I was never going to get again,” he says of the opportunity to attend CUNY. “I feel like I’m not afraid anymore.”

Sanchez is also looking ahead to the future. Like students across the country, she will spend May 1 making her final decision about where she’ll attend school and start working toward becoming a neurosurgeon. It should be an exciting time, and yet, the realities of her life are still weighing on her as she prepares to pen the speech she will deliver to her senior class on graduation day.

“I’m a DACA student and I’m really afraid of what people might think of me if I go up to them at the stadium and say hey, this is me. I’m your valedictorian,” she says. “What are they going to think, you know?” 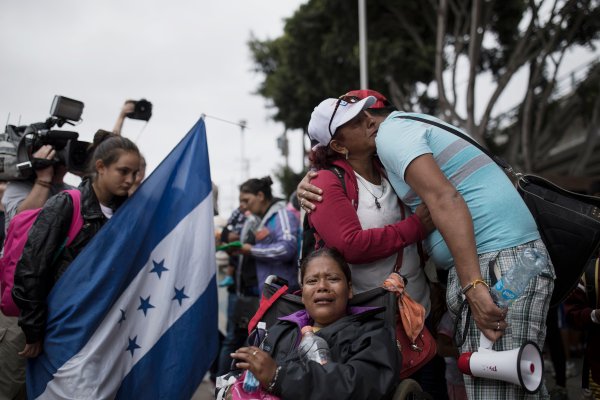 The Migrant Caravan Trump Complained About Has Reached the U.S. Border
Next Up: Editor's Pick