The 15 Best Thanksgiving Movies to Watch This Holiday Season

After an indulgent Thanksgiving feast, there’s no better way to cope with the bloat than to settle in to binge-watch a holiday film marathon. And just like the abundance of side dishes available on the holiday table, there’s a Thanksgiving movie suited to just about everyone’s taste.

Those looking to stick to something classic and family-friendly can turn on A Charlie Brown Thanksgiving, while those looking for something that mirrors their experiences of family angst during the holidays might prefer the complicated dynamics of the Katie Holmes-fronted indie Pieces of April. For viewers who prefer something adjacent to the holiday instead of focused on it, there’s the beloved rom-com You’ve Got Mail, probably the only film to turn a Thanksgiving shopping run at Zabar’s into a pivotal plot point in a burgeoning romance.

From romantic and heartwarming to hilarious and side-splitting, here are the best Thanksgiving movies to watch this holiday season.

Football, friends and an impromptu feast skillfully prepared by Chefs Snoopy and Woodstock—consisting of buttered toast, pretzels, popcorn, and jelly beans—are the ingredients that make up this heartwarming classic cartoon about practicing gratitude during Thanksgiving.

Yes, Rocky’s about boxing, but it’s about so much more. Familial conflict leads to romance for Adrian Pennino (Talia Shire) and Rocky Balboa (Sylvester Stallone) after Adrian’s irascible older brother, Paulie (Burt Young), tosses the turkey she’s been cooking for Thanksgiving out the back door. Not to worry, however; Rocky salvages the holiday by taking Adrian out to the ice skating rink for a sweet date.

Martin Scorsese’s documentary The Last Waltz captures the Canadian-American rock group The Band’s iconic farewell concert, filmed on Thanksgiving Day, 1976. More than that, it’s an ode to the generation of rock and roll in which their music flourished. The concert not only featured The Band, but guests like Eric Clapton, Joni Mitchell, Neil Young, and Ringo Starr, making for a classic concert film.

While The Big Chill isn’t explicitly a Thanksgiving movie, it has many of the holiday’s themes (gathering with loved ones, the explosion of simmering disagreements, preparing and sharing a meal together) and a nostalgic flashback scene that takes place during a Thanksgiving past.

Anyone who’s had transportation woes during the holidays can identify and hopefully laugh with Planes, Trains and Automobiles, John Hughes’ buddy comedy starring Steve Martin and John Candy. The pair faces a number of hilarious, transportation-related challenges in a race to get Martin’s character home in time for Thanksgiving with his family.

Leave it to the Addams family to bring up a cheeky critique of a holiday while simultaneously celebrating it. In one of the most memorable scenes in the now-cult classic Addams Family Values, Wednesday (played by a grim and glorious Christina Ricci) takes a snobby frenemy to task during a Thanksgiving camp skit portraying white settlers and Native Americans. Wednesday, playing an anachronistic Pocahontas, and other bullied kids at camp who were cast as Native Americans, employ extremely problematic stereotypes as they portray a community they don’t belong to. Ultimately, though, they offer a larger rebuke of colonization.

Holly Hunter’s single mother Claudia Larson just can’t catch a break ahead of Thanksgiving in Home for the Holidays. After losing her job, kissing her ex-boss, and being blindsided by her precocious daughter’s plans for the holiday, the last thing Claudia needs is family drama, which, of course, is exactly what she gets once she arrives back at her parents’ house.

It’s a seriously twisted Thanksgiving for the Pascal family, thanks to the volatile whims of Parker Posey’s zany “Jackie-O” in The House of Yes. Jealousy, incest, borderline personality disorder and an obsession with Jacqueline Kennedy are all served with a healthy dose of camp in this kooky holiday movie.

Thanksgiving is a tumultuous affair, both literally and figuratively, for the residents of this cold suburban enclave of Connecticut. Ang Lee’s adaptation of the novel of the same name is a darker choice of Thanksgiving movie, in which infidelity, alcohol abuse and sexual exploration take center stage.

While one might assume that the best holiday moments in You’ve Got Mail center around Christmas, given the caroling, tree-trimming and Christmas shopping at the bookstore, it’s important to remember that Thanksgiving plays an important role in the development of the romance between the rivals-turned-internet paramours played by Tom Hanks and Meg Ryan. In a memorable moment on Thanksgiving, Hanks’ character rescues Ryan from the wrath of a cashier and her fellow patrons while in line at the classic New York deli store, Zabar’s.

Four families from four different cultures celebrate the holiday in their own way and with their own special traditions, all while confronting their own interpersonal conflicts. Gurinder Chadha’s dramedy stars Mercedes Ruehl, Kyra Sedgwick, Julianna Margulies and Alfre Woodard.

If you’re grateful for the internet’s boyfriend, Keanu Reeves, this Thanksgiving, then you’ll definitely want to watch Sweet November. In the film, Reeves plays a self-centered businessman named Nelson whose life gets turned upside down when he has a chance encounter with a woman named Sara (Charlize Theron), who convinces him to spend all of November with her. The Thanksgiving they share culminates in a bittersweet celebration of both the holiday and their relationship.

Katie Holmes plays April, the rebellious black sheep of a conventional family, who invites her parents and siblings to share a Thanksgiving feast in her tiny Lower East Side apartment after she finds out that her mother (Patricia Clarkson, who scored an Oscar nom for this role) has terminal breast cancer.

In Judd Apatow’s dark comedy about a successful comedian and actor reevaluating his life choices after receiving a cancer diagnosis, Adam Sandler delivers one of the most touching Friendsgiving speeches in all of film history.

The tensions that can arise at a family holiday gathering are examined in intimate detail in Krisha, the first feature from director Trey Edwards Shults. In the film, Krisha, a woman who has struggled with addiction, returns to her family’s suburban home in an attempt to make amends with estranged relatives, including her son Trey. The film itself, a darker choice than Charlie Brown, to be sure, is a family affair in real life, albeit with much less drama; Shults plays Trey, the role that bears his name, while his aunt Krisha Fairchild plays the titular role. 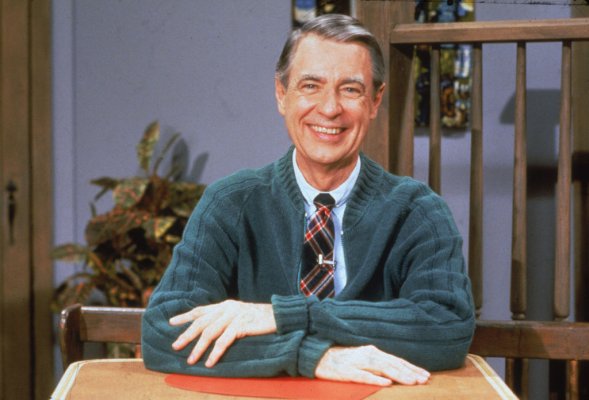 Inside the Unlikely Friendship That Inspired A Beautiful Day in the Neighborhood
Next Up: Editor's Pick