The U.K. government’s decision to delay the release of a report on alleged Russian interference in British politics has been criticized as “shameful” by Hillary Clinton. Speaking to the BBC on Monday November 11, while on a book tour in the U.K., the former U.S. presidential candidate said people in Britain deserve to see what is included in the report before the general election next month.

The 50-page report by parliament’s Intelligence and Security Committee (ISC), entitled “Russia”, was due to be published Monday November 4, but it will now be delayed until after the Dec. 12 general election, as Prime Minister Boris Johnson has refused to give it the necessary approval. The culmination of an 18-month inquiry, the ISC report had compiled evidence from Britain’s main intelligence agencies, MI5, GCHQ and MI6. The BBC said the report “includes allegations of espionage, subversion and interference in elections.”

Clinton said she was “dumbfounded” that the government would not release the report. “That should be an absolute condition,” she said. “I find it inexplicable that your government will not release a government report about Russian influence. Inexplicable and shameful.” There is no doubt, she says, that Russia is “determined” to try to shape the politics of Western democracies, “we know it in our country, we have seen it in Europe, we have seen it here.”

A spokesperson for Johnson’s office, 10 Downing Street, defended the report’s delay in statement: “There are a number of administrative stages and processes which reports such as this, which often contain sensitive information, have to go through before they are published.”

But the delay has raised suspicion among a number of British politicians. Labour’s shadow foreign secretary Emily Thornberry said the decision was “clearly politically motivated”. Speaking in the Commons last week, she suggested the report could lead to questions about links between Russia, Brexit and the Tory leadership, which could disrupt the Conservative election campaign.

Russia is suspected of conducting an interference operation to swing the 2016 Brexit referendum in favor of the “leave” side, which Johnson supported as a figurehead of the campaign group Vote Leave. On Nov. 10, The Sunday Times newspaper also reported that nine Russian donors to the ruling Conservative Party have been named in the secret intelligence report. It also wrote that intelligence agencies are “furious” over the government’s block on the publication of the report.

The British government says it has not seen evidence of “successful” Russian interference in U.K. elections, including the 2016 vote to leave the E.U. But Britain has accused the Kremlin of meddling in the domestic politics and elections of several Western countries, including the 2016 U.S. presidential election. Putin hotly denied any interference with the U.S. vote to help Donald Trump win the presidency, even though U.S. special counsel Robert Mueller has revealed evidence of a Kremlin operation to interfere with the vote. Mueller charged 12 Russian military intelligence officers with breaking into Democratic Party emails, and indicted other Russians who used fake social media accounts to spread divisive rhetoric that aimed to undermine the U.S. political system.

Clinton claims that Russia were still “in” the U.S. electoral system, “pumping out propaganda”, adding “I’d hate to see that happen here”. 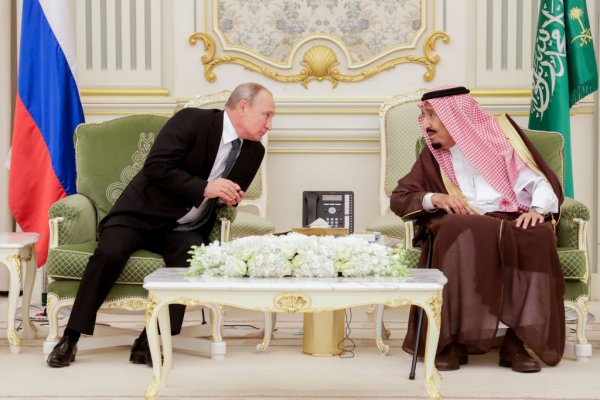 30 Years After the Fall of the Berlin Wall, Russia Is Only Pretending to Be a Major Power
Next Up: Editor's Pick