Claiming he misspoke, President Donald Trump reversed his controversial comments denying Russian meddling in the 2016 election after a summit with Vladimir Putin in Helsinki Monday.

Speaking publicly for the first time since his comments at the summit were widely condemned, Trump said that after reviewing a transcript of his remarks he realized that he meant to say that he “would not” see any reason why Russia didn’t interfere.

Reading from prepared remarks, Trump said that he accepted the broad consensus of the U.S. intelligence community that Russia meddled in the election, then ad-libbed that there “could be other people also.”

“While Russia’s actions had no impact at all on the outcome of the election, let me be totally clear in saying — and I’ve said this many times — I accept our intelligence community’s conclusion that Russia’s meddling in the 2016 election took place,” he said. “Could be other people also. A lot of people out there.”

The comments were the first he has delivered publicly since he landed in the United States Monday, fresh off his summit with Putin in Helsinki, Finland. But they marked a stunning reversal for the President, who less than 24 hours earlier had refused to back the findings of the intelligence community while standing next to Putin at a joint press conference. “My people came to me, [Director of National Intelligence] Dan Coats came to me and some others, they said they think it’s Russia. I have President Putin; he just said it’s not Russia,” Trump said Monday. “I will say this: I don’t see any reason why it would be.”

Trump explained Tuesday that he had said the word ‘would’ instead of “wouldn’t, and that was why he was publicly clarifying his remarks. “The sentence should have been… ‘I don’t see any reason why it wouldn’t be Russia. Sort of a double negative,” he explained. “I think that probably clarifies things pretty good by itself.”

Shortly after Trump issued his remarks, the White House sent out a press release titled “President Donald J. Trump is Protecting our Elections and Standing up to Russia’s Malign Activities,” touting the various ways the administration says it has tried to protect the U.S. election system and confront Russia.

Although Trump’s comments had garnered a widespread rebuke on both sides of the aisle and from the intelligence community, it was only Democrats who initially weighed in on his retraction – and they weren’t satisfied. “If the president can’t say directly to President Putin that he is wrong and we are right and our intelligence agencies are right, it’s ineffective, and worse, another sign of weakness,” said Minority Senate Leader Chuck Schumer. “It tells President Putin ‘continue to take advantage of Donald Trump’ because he doesn’t have the courage, the strength, maybe not even the conviction to say to Putin’s face what he tried to say a few minutes ago.”

And Trump’s remarks equating the validity of the intelligence community’s assessments and Putin’s denial was not the only source of controversy from the press conference. When Putin offered Russia’s assistance in Special Counsel Robert Mueller’s probe into Russian meddling and collusion – an investigation Trump has repeatedly called a “witch hunt” – by allowing Americans to interview the 12 intelligence officials recently indicted in exchange for Russian law enforcement question people they deem suspicious (like Bill Browder) the President said that was an “incredible offer.” He questioned why the FBI never took the private e-mail servers from the Democratic National Committee when it was investigating the 2016 hack, an implicit nod to the conspiracy theory that the servers were not hacked, but the e-mails were merely leaked by unhappy staffers.

“I think in Russia they wouldn’t be gone so easily,” Trump said of the server, another indication he seemed to be letting Russia off the hook.

When clarifying his comments Tuesday, Trump did not retract any of those remarks. Instead he told reporters that his meeting with Putin was “very strong,” and that the two want to forge consensus on North Korea’s denuclearization and the Syrian civil war. 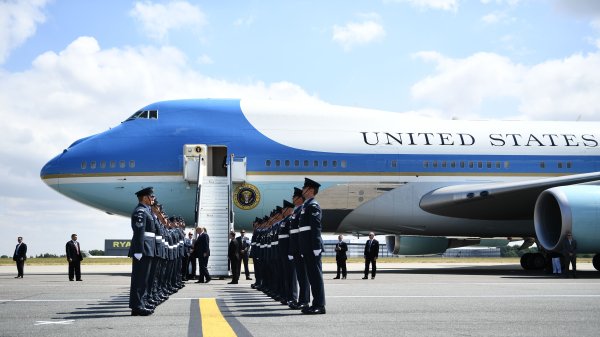 Trump Wants to Repaint Air Force One 'Red, White and Blue'
Next Up: Editor's Pick