During Thursday’s broadcast, Donald Trump Jr. and his girlfriend Kimberly Guilfoyle‘s appearance on The View got predictably heated.

President Trump’s oldest son and the former Fox News host were booked on the show to promote Trump Jr.’s new book, Triggered: How the Left Thrives on Hate and Wants to Silence Us, but the interview touched on a range of subjects including the impeachment inquiry, the 2020 presidential race, and the broader state of political rhetoric in the United States. The pair sparred with many of the talk show’s co-hosts, including Behar and Whoopi Goldberg, while the audience responded with competing boos and cheers. Protestors also reportedly swarmed Trump Jr.’s car as he both entered and left the studio.

A dispatch in The Hollywood Reporter from a member of the audience claimed that Goldberg remonstrated them during a commercial break. “The booing is f-cking us up,” THR says Goldberg said.

“It’s messing with everyone’s mic,” Goldberg allegedly continued. “You can grimace and all that. All we hear is booing.”

During the broadcast, co-host Meghan McCain, daughter of late Senator John McCain, asked Trump Jr. for a response to his father’s impact on political discourse in the U.S. “You and your family have hurt a lot of people and put a lot of people through a lot of pain,” she said. “Does all of this make you feel good?”

“I don’t think any of that makes me feel good, but I do think we got into this because we wanted to do what’s right for America,” Trump Jr. responded. “I understand that [my father] is controversial. I understand that he has offended a lot of people, but I understand that he took on the establishment, and that’s the premiere sin in American politics these days.”

Over the years, President Trump repeatedly mocked Sen. McCain, criticizing him for being held as a prisoner of war and tortured during the Vietnam War and saying he like “people that weren’t captured.” The President and Sen. McCain had also sparred on issues such as healthcare reform, so much so that Sen. McCain reportedly did not want Trump attending his funeral. His wife Cindy McCain said in 2018 that she didn’t want President Trump at her husband’s funeral because she wanted to hold it “with dignity.”

Meghan McCain has publicly criticized the President in defense of her father. In March, she said on The View, “[Trump] spends his weekend obsessing over great men because he knows it and I know it and all of you know it: He will never be a great man.”

All in all, then, everyone involved on Thursday seemed triggered by one comment or another — but no-one seemed to remember (much) that that was the book they were there to discuss. 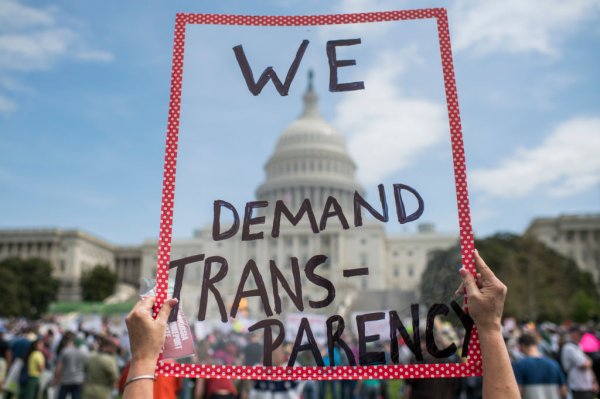 The Resistance Won't End When Trump Is Out of Office. Here's Our Top Priority for What Comes Next
Next Up: Editor's Pick