President Donald Trump’s feud with Sen. John McCain did not end with the Arizona Republican’s death.

As a week of mourning began for the longtime senator and Vietnam War hero, the president once again found a way to make his feelings known, reportedly rejecting an official statement on his death and quickly returning the flag atop the White House to full staff.

The bad blood between the two men appears to have started as early as 1999, when Trump was asked about various candidates running for the Republican nomination in a “60 Minutes” interview.

“He was captured … Does being captured make you a hero? I don’t know. I’m not sure,” he said.

It was an argument that Trump replayed early in the 2016 Republican presidential primary, when Trump explicitly argued that McCain was not a war hero just because he was captured and held for five and a half years in a North Vietnamese prison, where he was repeatedly tortured.

“He’s not a war hero,” Trump said at the Family Leadership Summit in Iowa in July of 2015. “He was a war hero because he was captured. I like people who weren’t captured.”

In spite of the remarks, McCain backed Trump’s presidential campaign until the “Access Hollywood” tape dropped in which Trump bragged about sexually assaulting women.

“I have wanted to support the candidate our party nominated. He was not my choice, but as a past nominee, I thought it important I respect the fact that Donald Trump won a majority of the delegates by the rules our party set,” McCain said in a statement. “But Donald Trump’s behavior this week, concluding with the disclosure of his demeaning comments about women and his boasts about sexual assaults, make it impossible to continue to offer even conditional support for his candidacy.”

Trump responded with a tweeted attack.

McCain later took a veiled swipe at Trump in an interview that aired on C-SPAN in 2017.

“One aspect of the [Vietnam] conflict by the way that I will never ever countenance is that we drafted the lowest income level of America and the highest income level found a doctor that would say that they had a bone spur,” said the Arizona Republican, who was battling cancer. “That is wrong. That is wrong. If we are going to ask every American to serve, every American should serve.”

Trump received five deferments during the War. Four while he was attending college and one after a doctor diagnosed him with bone spurs in his heels after he graduated. “I had a doctor that gave me a letter — a very strong letter on the heels,” he told the New York Times in 2016.

And McCain delivered another blistering rebuke of the president’s approach to politics while receiving a Liberty Medal from the National Constitution Center when he decried “half-baked, spurious nationalism cooked up by people who would rather find scapegoats than solve problems.”

“To fear the world we have organized and led for three-quarters of a century,” he said, is as “unpatriotic as an attachment to any other tired dogma of the past that Americans consigned to the ash heap of history.”

After the speech, the president warned that he will “fight back” when asked about it in an interview. “I’m being very nice. I’m being very, very nice. But at some point I fight back, and it won’t be pretty,” he said.

Before that, Trump attacked McCain over his decisive vote against a Republican bill that would have repealed the Affordable Care Act. In a tweet, the president said he’d “Let Arizona down!” when he voted against the bill.

McCain was asked if he voted against the bill in an effort to get back at Trump for questioning his Vietnam War record in an interview with “60 Minutes.”

McCain said the vote wasn’t personal, but said he and the president had notable differences, “Different upbringing. Different life experiences,” he said.

“He is in the business of making money and he has been successful both in television as well as Miss America and others,” he said. “I was raised in a military family.”

He continued: “I was raised in the concept and belief that duty, honor, country is the lodestar for the behavior that we have to exhibit every single day.” 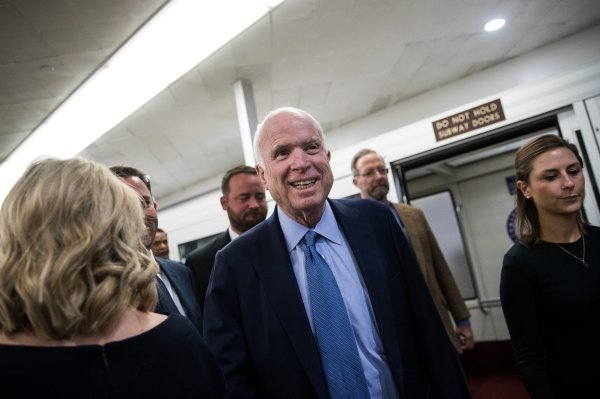