A poll workers explains the voting process to a voter at a public school polling location in New York on Nov. 5, 2019.
Gabriela Bhaskar—The New York Times/Redux
By Anna Purna Kambhampaty

New York City voted on Tuesday to change the way it determines election winners. With approval from more than 73% of voters, the Big Apple joins Maine and countries including Australia and New Zealand in adopting what’s known as ranked-choice voting.

This popular electoral system allows voters to rank candidates by preference, meaning they can submit ballots that list not only their first-choice candidate for a position, but also their second, third and so on.

Ranked-choice voting advocates, including Democratic presidential candidate Andrew Yang, who has championed it as a key policy initiative, say it could help prevent evermore polarized election campaigns, increase the number of women and minority candidates running for office, and reduce negative campaigning. Critics say that the new system could make elections much more complicated for voters and be abused by parties trying to game the system.

In addition to Maine, which has adopted the system statewide, several states are experimenting with ranked-choice voting. Alaska, Hawaii, Kansas, and Wyoming plan to use ranked-choice for voters in the 2020 Democratic primaries, and Nevada plans to use it for early voters in their 2020 Democratic caucuses, according to FairVote, a nonpartisan group that advocates for election reform.

“We are really settling on ranked-choice voting as the most promising reform to democratize and depolarize our politics,” says Larry Diamond, the former director of Stanford’s Center on Democracy, Development, and the Rule of Law. “I think it’s not only here to stay but that it’s gaining support across the country.”

Here’s what to know about ranked-choice voting.

What is ranked-choice voting?

Ranked-choice voting is an electoral system that allows people to vote for multiple candidates, in order of preference. Instead of just choosing who you want to win, you fill out the ballot saying who is your first choice, second choice, or third choice (or more as needed) for each position.

In comparison, the U.S. federal government and most American states and cities currently use what’s known as the plurality system: the candidate with the highest number of votes wins—period. It doesn’t matter whether that candidate earned the majority of the vote.

In a ranked-choice voting system, it works differently. The winning candidate almost always ends up with a majority of votes—even if some portion of the electorate selected him or her as a second or third choice.

If ranked-choice voting was adopted nationwide, it would fundamentally change how U.S. elections work.

Take the last presidential election, for example. In 2016, both Donald Trump and Hillary Clinton received less than 50% of the total vote in 12 states, with the remainder going to third-party candidates. Under the current system, in each of those states, the candidate with the most votes was declared victorious. If the U.S. had a ranked-choice voting system, voters would have been asked to choose a second choice, third choice or more. (If Green Party candidate Jill Stein was a voter’s first choice, for instance, she would have been given the option of choosing a different candidate—Clinton, Trump, etc.—as her second choice.)

Ranked-choice voting advocates argue that the plurality system doesn’t always reflect the true will of the people. It can lead to vote-splitting among candidates with similar positions, resulting in a candidate who is less popular overall being elected, experts say. That’s called the “Nader” effect or the “spoiler” effect.

The most notorious example of this is the 2000 presidential election, when nearly 3 million mostly left-leaning voters cast their ballots for third-party candidate Ralph Nader. If ranked-choice voting had been in place at the time, Democrat Al Gore may have prevailed in the key state of Florida, where neither Gore nor Republican George W. Bush won a majority of the vote, says Don Saari, author of Decisions and Elections. (Florida was the center of a vote-counting scandal, and Bush’s narrow win there ensured his ascension to the White House, despite losing the popular vote nationwide.) “Gore was the second-place choice of many of Ralph Nader’s supporters, particularly in the states of Florida and New Hampshire, where Bush narrowly won,” says Saari. “A goal of Nader’s Green Party was to reach a certain percentage of the total vote, which is a reason why many Nader voters did not want to vote for their second-ranked Gore.”

Because it helps eliminate vote-splitting, a ranked-choice voting system can have the effect of encouraging more third-party and centrist candidates, advocates say. Michael Bloomberg, a centrist, third-party candidate, considered running in the 2016 presidential election but decided not to upon concluding that he might split the Democratic vote with Clinton, increasing the chances of Trump’s victory. (Trump, of course, still won the election, though he lost the popular vote to Clinton.) Again, the 2016 election offers a good hypothetical example. If a ranked-choice voting system had been in place in Michigan, then Clinton, not Trump, may have won that state. Because neither candidate received a majority of the Michigan vote, ranked-choice voting would have come into play. And if we can assume that most Stein voters would have chosen Clinton as their second choice, the former Secretary of State would have won, according to Saari. Trump won Michigan by 10,700; Stein received more than 51,000 votes.

Where is ranked-choice voting used?

Among the countries that have implemented ranked-choice systems nationwide are Australia, New Zealand, Malta and Ireland.

Australia first introduced ranked-choice voting more than a century ago, and the system has helped the country avoid vote-splitting by allowing voters to still vote for less-popular and similar candidates that they like. “Voters liked it because it gave them more choice so they didn’t need to worry about wasting their vote if they wanted to vote for one of the smaller parties,” says Benjamin Reilly, an electoral system design expert at the University of Western Australia, pointing out how ranked-choice systems allow voters to avoid guilt by giving them the option to express support for third-party candidates as well as candidates from bigger parties.

Additionally, it has proved to be a sort of “prophylactic against extremism,” helping to strengthen the political center, Reilly says.

Australia’s ranked-choice system suits voters well enough that there is almost no discussion of alternative electoral systems, according to Reilly. “Both voters and politicians are very used to the idea of rankings and would probably see a system which did not allow that as lacking something and maybe even illegitimate,” Reilly explains.

What are the benefits of ranked-choice voting?

“A lot of research shows that when you, as a candidate, go negative, you hurt public perceptions of yourself, but you do more damage to your opponent, and in plurality elections, this tradeoff can pay off,” says Diamond, the Stanford researcher. But since candidates are forced to rely on second and third-place votes in ranked-choice elections, negative campaigning can open the way for a third candidate to gain support. “It becomes much more costly to go negative since you risk losing your ability to pick up second-preference votes, and it actually does more harm than good,” Diamond adds.

A 2018 study showed that this created a slight percentage increase in female candidates running. This may be because women can be “deterred from running for office if they have to campaign negatively to win,” explains Sarah John, an author of the study and former director of research at FairVote. “Over time we expect candidates to learn how to run an effective ranked-choice voting election campaign, which will less often include ‘going negative.”

The study also showed that women overall and minority women are more likely to win in ranked-choice voting systems. This is, in part, because of an unconscious ticket “balancing” that many voters tend to practice. “When voters are asked to vote for or rank a whole field of candidates under proportional or ranked systems, they often tend to include female or minority candidates in the mix for balance,” explains John.

What do critics say about ranked-choice voting?

Matthew Gagnon, CEO of the Maine Heritage Policy Center, explains how ranked-choice voting can complicate elections for voters. Ranked-choice ballots can require voters to read up on more candidates and require more time in the voting booth, which can lead to voters making mistakes during voting.

“Our belief is that Maine voters do not know how to maximize their influence in ranked-choice elections by ranking all the candidates, which is compounded when political parties tell voters to rank only one candidate,” says Gagnon.

There is also fear that ranked-choice voting can be used by interested parties to game the system. Since candidates often win with the aid of lower-preference rankings, ranked-choice elections can incentivize parties to look for third-party candidates to insert into a race for their own benefit.

Less negative campaigning can also be a bad thing, some argue. When less dirt gets dug up about candidates, candidates get a free pass with regards to their pasts.

In 2018, U.S. Rep. Bruce Poliquin, R-Maine, filed a lawsuit challenging the constitutionality of Maine’s ranked-choice voting system, but the suit was eventually rejected by a federal judge. According to The Portland (Maine) Press Herald, U.S. District Court Judge Lance Walker wrote in his ruling that the plaintiffs are free to “call into question the wisdom of using [ranked-choice voting],” but that the “criticism falls short of constitutional impropriety,” ruling that the Constitution allows states their autonomy in choosing how to run elections. “A majority of Maine voters have rejected that criticism and Article I does not empower this Court to second guess the considered judgment of the polity on the basis of the tautological observation that [ranked-choice voting] may suffer from problems, as all voting systems do,” wrote Walker.

The original version of this story mischaracterized some of the terms describing how ranked-choice voting is implemented. The text has been clarified.

The original version of this story misstated the type of voting New York City will adopt. It will adopt instant-runoff voting. 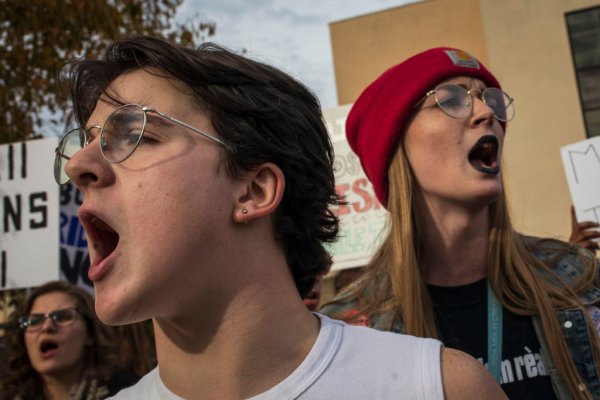 Young Voters Think U.S. Is on the Wrong Track, Poll Finds
Next Up: Editor's Pick