Donald Trump's Nomination Showed a Problem With How America Votes. Maine Thinks It Has the Solution.

Since the Republican primaries started in February, Donald Trump could not stop winning—or talking about it. “A couple of months ago, we weren’t expecting to win this one,” he said in a victory speech after the Nevada caucuses that month. “Now we’re winning, winning, winning the country.”

But those wins came with an asterisk of sorts. Because of a large field of opponents, the New York real estate mogul failed to win a majority of support among GOP primary voters—it wasn’t until April 19 that he won more than 50% of the vote in a state.

That followed a pattern long noted by political scientists. In multi-candidate races, the winner is often the person with the most dedicated base, not the most widespread support. In many cases, the majority of voters backed another candidate, leaving much of the electorate dissatisfied with the outcome and the winner with a dubious mandate to govern.

Both Republicans and Democrats have attempted to address that in presidential primaries with complicated delegate allocation formulas. But some voters in Maine who have wrestled with a similar problem think they’ve hit on a simpler solution: let voters rank their favorite candidates.

In November, Maine voters will decide whether they want to become the first state in the U.S. to implement ranked-choice voting. If a ballot initiative is approved, future Maine voters in primaries and general elections will be allowed to rank their choices for governor, Congress and statehouse races instead of voting for just one. If no one gets a majority in a race, the candidate who came in last is eliminated and the second choices of their voters are redistributed, in much the same way that a runoff election works. That process continues through multiple rounds until a single candidate reaches a majority.

The state has long struggled with elections that end without a clear mandate from the voters. In nine of the past 11 races for governor, the winner has received less than a majority, including as low as 35%. (The two exceptions, in 1982 and 1998, involved popular governors running for re-election.) Current Gov. Paul LePage, who won 38% in a four-way race in 2010 and was re-elected with 48% in a three-way race in 2014, remains one of the most unpopular governors in the country.

Admittedly, ranked-choice voting sounds more complicated than the typical check-one-box format Americans are used to. But Kyle Bailey, an independent consultant running the Committee for Ranked Choice Voting behind the initiative, says most voters he’s talked to quickly grasp the concept once he’s had a chance to explain it.

“We make ranked choices every day of our lives, we just don’t necessarily think about it,” he said, before settling on an analogy that seems appropriate in the Northeast. “When I go to Dunkin Donuts, I get a multigrain bagel. I know that if they don’t have any, then my second choice is a garlic bagel.”

Bailey thinks that ranked-choice voting could do more than help ensure the winner has majority support. He argues it would force candidates to run broader, more inclusive campaigns and avoid harsh attacks, since they’ll be trying to pick up second- and third-choice votes from their opponents. And there’s research to back that up: political scientists have found evidence that voters think ranked-choice elections are less negative.

It may also affect who wins. FairVote, an advocacy group that promotes ranked-choice voting nationwide, used polls to model how Trump might have fared if some Republican primaries had been held under that system. If their model is accurate, Trump would have had a reversal of fortune on his big sweep on Super Tuesday, losing seven of 11 states instead of winning that number.

The idea of ranked-choice voting has been around since the late 1800s, and it’s been used in national elections in Australia since 1919. But it didn’t really start to take off in the United States until the contested 2000 election, when Ralph Nader served as a spoiler for Al Gore, leading many liberals to embrace the idea.

Reformers began to experiment with ranked-choice voting in races for mayor and city council in liberal-leaning cities like Portland, Maine; Takoma Park, Maryland; Cambridge, Massachusetts; Minneapolis and St. Paul in Minnesota; and San Francisco, Oakland, Berkeley and San Leandro in California. The Academy of Motion Picture Arts and Sciences even adopted it when it expanded the Best Picture nomination pool for the Oscars in 2009.

One added incentive for cities to adopt the system was that it ends the need for runoffs, which are costly and tend to have even lower turnout than already-low municipal elections. David Kimball, a professor of political science at the University of Missouri-St. Louis, studied cities with ranked-choice voting and traditional ballots for a paper to be published later this year.

“We found that turnout in ranked-choice voting cities was nine or 10 percentage points higher than comparable cities in a primary or runoff election,” he said.

Not everyone is a fan, however. Some argue that the system is too complicated, especially in lower-profile races where voters already have trouble distinguishing between candidates.

“Rank choice voting turned checkers into chess and upended traditional democracy in favor of a system few understand and none can explain,” complains Gil Duran, a political consultant who votes in Oakland’s local elections. “In a system where low voter participation is a huge issue, remaking the election process into something a hell of a lot more confusing seems unwise.”

Another obstacle is simple logistics. Most voting machines aren’t set up to count ranked-choice votes, much less perform the tricky calculations of redistributing second- and third-choice votes. (Or, if Maine’s initiative is approved, fourth-, fifth- and sixth-place votes too.)

When Minneapolis first used ranked-choice voting in its 2009 municipal elections, city staffers had to count all the ballots by hand, a process that took 15 days. In 2013, it sped up the process with new equipment which exported the results to Microsoft Excel spreadsheets, though it still took three days to get the final results.

“It’s been tricky to shoehorn this system in, between state laws and federal regulations and the equipment available, none of which were really designed to address ranked-choice voting,” explained Minneapolis City Clerk Casey Carl, who is in charge of municipal elections.

One of the nation’s leading voting machine manufacturers, Hart Intercivic, has a solution. Eddie Perez, director of product management, said they had been getting questions about ranked-choice voting since 2010, so when they designed their new voting system, called Verity, they built it in as an option on paper, electronic and mail-in ballots.

Perez said that there’s no consensus on how ranked-choice voting should be run in the U.S., with local governments disagreeing on the number of candidates a voter can rank and how to count the votes afterward, so they design customized software to handle vote counting for each customer.

“We don’t yet have a lot of data and experience to know for sure what the best way is to tackle these kinds of elections,” he said.

Vladimir Kogan, a political science professor at The Ohio State University, warns that ranked-choice voting could have unintended consequences. One is something called “ballot exhaustion” in which voters either don’t rank enough candidates or have all of their picks eliminated before the final round of counting.

Another risk is that instead of solving the problem of independent candidates, ranked-choice voting could make it worse by encouraging more to run.

“The system you have affects the candidates you get,” Kogan said. “You don’t get more than five candidates in Maine now because they’re not viable. But just because that doesn’t happen now doesn’t mean that it won’t happen under ranked-choice voting. The incentive for coordinating on a top few candidates is no longer there.”

For Maine voters who are already dealing with multiple candidates running for office, though, that may not be a huge concern. And in the presidential primaries, where super PACs have empowered more candidates to get in and stay in, it may be a moot point.

For ranked-choice voting to happen in a presidential primary, party rules would have to change and individual states would have to implement it, so it’s unlikely to happen anytime soon. (Maine’s initiative does not affect the presidential primary there.) But Rob Richie, executive director of FairVote, says Republicans in particular might want to start looking into it.

“Ted Cruz had the evangelical lane, Rand Paul had the libertarian lane, and there was an Establishment lane. If they were to lose this year’s race and have an open race in 2020, those lanes will still exist,” he said. “Ranked-choice voting would be particularly helpful for a party that wants a candidate who can do well in their lane but also get votes from outside their lane, and show that from the beginning.” 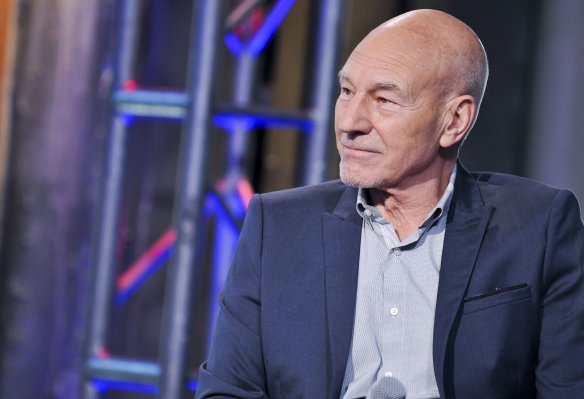 Patrick Stewart Made This Impassioned Plea for Britain to Stay in the European Union
Next Up: Editor's Pick