Air Pollution Turned India's Capital Into a 'Climate Emergency.' It's Part of a Global Trend Killing 7 Million Prematurely Each Year

Air pollution levels in India’s capital have soared to hazardous levels this week, leaving a toxic grey haze hanging over the city and causing poor visibility. The pollution has been so pervasive that national monuments were largely obscured by thick smog. Many who venture outside suffer teary eyes and troubling coughs.

Delhi was already considered one of the world’s most polluted cities, and it’s only gotten worse this month. Air quality deteriorated so significantly that the local government declared a public health emergency, schools were shut down, and flights were cancelled. By one estimate, breathing Delhi’s air for one day has the health impacts of smoking at least 25 cigarettes. Although Delhi typically experiences marked increases in air pollution around November, this year’s pollution prompted Delhi’s Chief Minister, Arvind Kejriwal, to call the city a “gas chamber.”

Delhi typically experiences “striking spikes in air pollution” in the late-fall early-winter time period, although the deterioration of air quality this year is particularly concerning, Vijay Limaye, climate change and health science fellow at the Natural Resources Defense Council who has been studying air quality in India, tells TIME.

“We’re exceeding the measurement capabilities” of some of these pollution particle sensors, Limaye says, explaining that the pollution levels were “effectively off the charts.” A combination of human and environmental factors, including agricultural crop burning to clear fields and fumes from passenger and freight vehicles, combined to create a “perfect storm of pollution,” Limaye says.

The weather — slowing winds and stagnant air — also allowed for a build-up in pollution. The grey skies also come less than a week after Diwali, which is celebrated by many with fireworks — even though the Supreme Court has banned most of them.

Public health experts and politicians are concerned by the magnitude of pollution, with Delhi’s chief minister Arvind Kejriwal saying on Nov. 1 that the city had turned into “into a gas chamber.”

Eric Holthaus, a meteorologist, tweeted that New Delhi was facing a “climate emergency.”

As many Delhi residents stayed cooped up indoors, India’s government and courts ordered short-term measures aimed at curbing pollution and keeping the public healthy. At least five million masks were distributed, according to Kejriwal. The Supreme Court weighed in on Monday, accusing state authorities of “passing the buck” on dealing with the crisis.

The Supreme Court also ordered a ban on farmers burning crop stubble to clear their fields in nearby states. The government’s environmental monitoring agency found that satellite pictures showed more than 3,000 incidents of such agricultural burning in neighboring states, amounting to almost half of the city’s pollution, Reuters reported.

“Delhi is choking every year and we are unable to do anything,” said Supreme Court Justice Arun Mishra, according to the BBC.

The current levels of air pollution in Delhi is particularly dangerous because of the presence of tiny particulate matter referred to as PM 2.5. These particles are “many times smaller than the diameter of a strand of human hair,” Limaye says. They are “extraordinarily damaging because they can bypass our natural defense mechanisms — coughing or sneezing or swallowing — to get deep into the respiratory tract and actually enter our lungs and bloodstream,” he explains.

The peak levels of pollution in Delhi early November far surpass the WHO’s standards for PM 2.5 levels. On Nov. 3, the level of PM 2.5 was more than 23 times higher than the corresponding WHO air quality guidelines, according to data from the Indian Central Pollution Control Board.

Smog is not uncommon in India’s capital, where pollution levels reach such high levels that visibility is reduced and it is hard to make out the color of traffic signals. India has long exceeded the WHO’s standards for air pollution. A study in Lancet Planetary Health found that in 2017 the average pollution PM 2.5 level across India was nine times the annual mean measure recommended by the WHO and that outdoor exposures to these small particles resulted in 670,000 deaths in 2017. That’s a size-able proportion of the total 2.94 million global deaths from outdoor PM 2.5 pollution exposures that same year, according to the Institute for Health Metrics and Evaluation.

At least 22 of the world’s 30 worst most polluted cities in 2018 were in India, according to a study from AirVisual and Greenpeace.

Juan Jose Castillo, a regional advisor in air quality and health at PAHO/WHO tells TIME that this kind of pollution is a “global menace,” he adds, noting that “we can absolutely say that air pollution is increasing globally.” And the effects are dire. About 7 million people worldwide die prematurely each year from air pollution related diseases, according to a 2018 UN report — with 4 million of these deaths occurring in Asia-Pacific.

Air pollution is associated with several serious health issues, including heart attacks, asthma attacks, heart disease and lung cancer. What’s more, “The science tells us that health risks related to pollution exposure increase the longer someone is outside,” Limaye says. But he adds that even short-term exposure to these small particles is enough to cause serious long-term health problems. Dr. Salil Sharma, a throat specialist, told the AP that 95% of his patients over the last 10 days are sick because of the pollution.

The global air pollution crisis is connected to climate change, explains Limaye. “They are linked problems with linked solutions,” he says, explaining that higher temperatures can drive up some types of air pollution. The forces that are driving air pollution, like fossil fuel combustion, is “the same driver of carbon pollution that is exacerbating global climate change,” he says.

So transitioning to cleaner renewable energy sources isn’t just about dealing with an “existential long term global threat” but can reap immediate public health benefits that can also help save on health care costs. “We need short term actions — the odd-even scheme, distributing masks, really dramatic action,” Limaye says. “But we also need sustained work to address the underlying problem and in doing so we can tackle the climate crisis. It’s really a win-win for climate mitigation and for public health.” 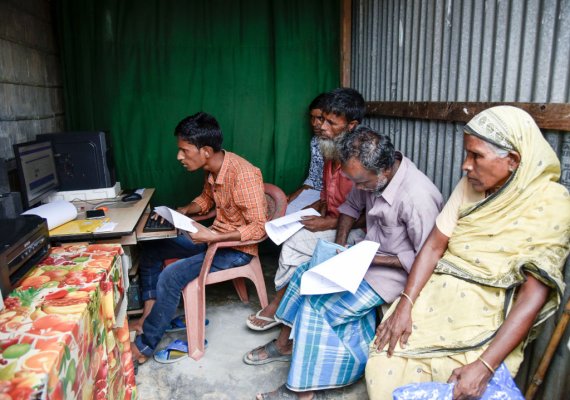 Facebook Was Used to Incite Violence in Myanmar. A New Report on Hate Speech Shows It Hasn't Learned Enough Since Then
Next Up: Editor's Pick