'We Must Fix This.' John Oliver Casts a Vote for Improved Election Security on Last Week Tonight

There’s a vital state election on Tuesday, so John Oliver dedicated this week’s Last Week Tonight to voting, which “among other the things it’s the only way to get Sean Spicer off of Dancing with the Stars,” he joked. After showing a montage of Donald Trump’s former press secretary dancing, Oliver begged, “Please America, put this man out of everyone’s misery.”

In advance of Tuesday’s election, Oliver had one question: How much do you trust the system that counts your ballots? During the 2016 election, the Russians attempted to hack voting systems in all 50 states, according to Oliver.

“They are Russians, there are precisely three things that they are good at: hacking, hockey, and writing books so sad they make you want to drink a potato.”

And as the voting machines get older, according to Oliver, they are increasingly vulnerable to exploitation. During the 2000 presidential election, he said, the race between George W. Bush and Al Gore ended in Florida, which used punch-card ballots with their now infamous hanging chads.

“Much like the third elimination in every season of The Bachelorette, it all came down to the chads.”

The result was that Americans became nervous about punch card ballots and invested heavily in new electronic voting equipment. But, alleges Oliver, that equipment can be prone to breaking and in some states is full of security flaws. “Georgia’s election system operates at the same level of technical proficiency as every dad,” Oliver joked.

According to Oliver, every voting machine can be tampered with, so the solution isn’t to make unhackable machines, but to make them as secure as possible. To explain why that is important, he then showed a clip of Vladimir Putin “joking” that he was going to attempt to influence the U.S. election—again. Congress, Oliver says, should allocate money for voting machines that do not connect to the Internet to limit hacking and have a paper trail in case of digital errors.

“We can fix this and we must fix this, because it is critically important for people to have confidence in our voting machines,” Oliver said. “We should have more faith in our system for choosing our leaders than the one that inexplicably keeps Sean Spicer doing the cha-cha on national TV.” 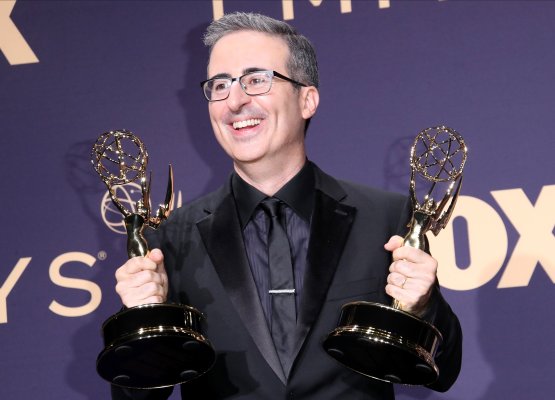 John Oliver Accuses Donald Trump of Betraying the Kurds
Next Up: Editor's Pick