Hariri said he had “reached a dead end,” after protesters rejected a package of reforms he introduced last week. But his resignation looks unlikely to assuage protesters, who seek nothing less than the removal of the entire system, as the country’s economy teeters on the brink of collapse.

Here’s what to know about Hariri’s resignation and what it means for the protests in Lebanon.

The protests started on Oct. 17 after the government announced new taxes, including a fee on calls on free messaging services like WhatsApp. Protesters flooded the streets, angry at a government that has pushed Lebanon to the edge of economic collapse. This quickly grew into the largest anti-government protests in Lebanon’s history.

Hariri, the son of assassinated former Prime Minister Rafic Hariri, announced a package of reforms Oct. 21 that included a pledge to fight corruption, fix failing infrastructure, help for poor families and to cut politicians’ salaries in half.

That offer was met with chants of “revolution” and fresh calls for him to step down. Since then, the protests have only escalated, blocking major roads across the country. Banks and universities remain closed.

After Hariri resigned, some protesters chanted “We want the 16 million back,” in reference to the large sum Hariri is alleged to have given to a South African model. Hariri has not commented on the allegations, but the model claims she had an affair with Hariri before he took office, and there is no suggestion the cash gifts were illicit.

That amount is pocket change compared the tens, or even hundreds of billions of dollars the demonstrators say was stolen by their politicians, aided by bank secrecy laws. They say that want those laws lifted and the money back in the public coffers.

“We are going to stay in the street until the whole system falls down,” said Hanna Hajj, who is from the south of Lebanon but lives in Beirut. “It’s been 30 years of this. The system is corrupt.”

What’s the reaction in the streets?

Hariri’s resignation was greeted with cheers and pledges to continue the demonstrations. “This is goal one. We achieved it,” said Jad Rustom, 29, as he heard the news. “We are going to celebrate tonight and tomorrow we will see what is the next step.”

Protesters say they want an end to corruption, nepotism, government mismanagement and most of all, the sectarian political system that they say has allowed all these things to flourish. Lebanon’s current political system is based on a sectarian power-sharing agreement re-established at the end of the country’s civil war in 1990. It reserves certain offices for each religious sect; the President is always a Christian and the Prime Minister a Sunni Muslim.

“We want a Lebanon that is not sectarian,” says protester Karim Choueiri, 43, who works at a solar energy company. “We want the best person to be in power, not because he’s Christian, Muslim, Druze, or whatever.”

Within moments of Hariri’s announcement, protesters started repeating the popular chant “all of them means all of them”—a saying also scrawled on walls across the country. “All of them” means the demonstrators want each of the country’s sectarian party leaders to resign.

“I’m worried there is too much utopia and there is a long road ahead,” says Choueiri. “It’s like we opened Pandora’s box. What happens next is not clear.”

This is not the first time Hariri has resigned. In 2017, he stepped down in a televised address while on a trip to Saudi Arabia—most believe under the pressure of Saudi Crown Prince Mohammed bin Salman.

The Lebanese came together then demanding their “kidnapped” prime minister be released and demanding an end to foreign meddling in their country. Many saw the forced resignation as Saudi Arabia’s attempt to counter the influence of Iran, which backs the Shi’ite political and militant group Hezbollah in Lebanon.

At the time, Lebanese President Michel Aoun refused to accept Hariri’s resignation. “That time was different,” says Layal Sakr, a Lebanese lawyer and co-founder of Seeds for Legal Initiatives, a legal advocacy organization. “This time it was the pressure of the people.”

Hariri remains caretaker prime minister until the parliament votes on a new leader. And technically, “there is nothing in the law that says they cannot just nominate Saad Hariri again,” says Sakr. That would surely spark more outrage here.

What the protesters want is a new government, but elections must be ordered by the parliament, which still filled with the members of the old sectarian political parties.

If they do succeed in that, it’s unclear who will take over. The protesters have no leader or official list of demands, but most call for a technocratic government made up of experts who can help the country avoid complete financial collapse.

Why is Lebanon’s economy in such poor shape?

The civil war in neighboring Syria has negatively affected Lebanon’s economy, according to the World Bank, slowing GDP growth. At the same time, debt has piled up as lawmakers borrowed billions to pay for reconstruction from Lebanon’s own civil war, which lasted a decade and a half and ended in 1990. Protesters say officials also used the money to line their own pockets. The ratio of debt to GDP is now over 150%, and political paralysis has prevented the government doing much to tackle it.

Decades of state mismanagement and corruption has left Lebanon deeply divided between rich and poor, according to economist Nasreen Salti. Around one-third of Lebanese live below the poverty line, while an estimated 1% of the population holds 25% of the country’s wealth.

The war has also sent 1.5 million Syrians into Lebanon—which had a population of about 4.6 million at the start of the conflict—giving it the highest number of refugees in the world, per capita. While this has further strained the country’s cash-starved public services, the impact on the wider economy is disputed.

What has been the reaction to the protests?

Security forces have scuffled with protesters, who blocked roads several times. But the biggest on-the-ground confrontation has been between anti-government protesters and supporters of Hezbollah and Amal, Lebanon’s two main Shiite parties who both have ministers in the current government.

On Tuesday, these counter-protesters attacked anti-government demonstrators at a sit-in blocking a road in central Beirut. They carried no flags, but chanted in support of Amal leader Nabih Berri, shouting slogans like, “We are the children of the resistance.”

Hezbollah, which the U.S. government has designated a terrorist organization, is commonly referred to as “the resistance” in Lebanon because of the group’s role in ending the Israel’s occupation in south Lebanon. Hezbollah is also seen as less corrupt by many—but that image has been tarnished after Hezbollah’s leader Hassan Nasrallah, who has no official position in the government, said it should not resign and implied the protesters were backed by unnamed foreign embassies.

“There is clear funding by certain parties,” said Nasrallah. Protesters made light of this claim, some posting photos of their mothers making sandwiches for the protesters with captions like “this is support from from the Embassy of the Mother.”

After the confrontation Tuesday, the Amal and Hezbollah supporters raided the main protest camp, burning down tents and smashing chairs. Many of the protesters ran, but by evening, thousands had returned. “I feel bad for these people,” says anti-government protester Hussein Hassan of the counter-protesters as he stood amid the charred remains. “These people are poor, these people are brainwashed. I’m sure that soon enough they will join us in the streets, because our battle is theirs.” 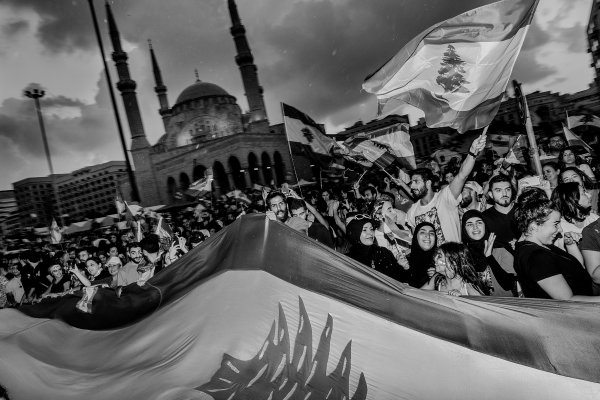 Protests in Lebanon Are Entering Their Sixth Day
Next Up: Editor's Pick