Protests in Lebanon Are Entering Their Sixth Day. See How the Extraordinary Revolt Is Unfolding

High, cement blast walls surrounding the United Nations offices in central Beirut are covered with anti-government graffiti. “Down with the rule of the mafia,” is spray-painted next to the word “revolution.” The names of every member of the Lebanese parliament are on the blast wall. The word “thief” is written below each name. Nearby, a crowd chants the same, “ thieves, thieves.”

Lebanese protesters say their politicians have stolen tens, or even hundreds, of billions of dollars from them, aided by laws that allow bank secrecy. Hundreds of thousands of them have taken to the streets over the last six days, in the biggest protests to sweep the country in over a decade. Here’s what to know.

People from all backgrounds protesting in Beirut on Oct. 18, 2019.
Myriam Boulos

The demonstrations began Thursday after the government announced new taxes, including a $6 monthly fee on calls on free messaging apps like WhatsApp, unleashing anger against decades of corruption, government mismanagement and nepotism.

In the first days, mostly young men swarmed around on scooters smashing shop windows and lighting fires in the middle of the street, as they chanted against the government. But by Saturday, that had given way to a festive, but still defiant, atmosphere. Men and women of all ages, class and religions sang patriotic ballad as fireworks burst above.

On Sunday, hundreds of thousands came out in the largest day of protests across the country.

The proposed tax was scrapped just hours after the protests started, but demonstrations continued.

Lebanon’s economy is stagnating and the country has one of the world’s highest debt to GDP ratios. Economists have warned of a complete economic collapse. In recent weeks, banks have restricted the withdrawal of U.S. dollars.

International donors have pledged to help Lebanon reduce the debt and the government has promised reforms to bring down expenditures.

The protests seem to be a leaderless uprising with one common objective—bringing down the government. No politician has been spared the ire of the protesters, but one, the foreign minister Gibran Bassil has been the target of the protesters’ most popular chant—“Hela, Hela, Hela Hela Ho, Gibran Bassil kes emmo.” Literally translated, it’s a crude reference to his mother’s genitals, but here it essentially means, “f—k him.” Even outside of the protests, youth hum the tune, and patrons in cafés spontaneously join in. “This is a next-level insult,” says protester Michael Chamoun, 29. “That’s how angry the people are.”

Before being appointed foreign minister, Bassil served as the country’s Minister of Energy and Water. In 2012, was a popular hashtag #BlameBassil. Lebanese aired their grievances about the country’s shortage of water and daily electricity cuts. But he’s also known for his anti-refugee rhetoric, pledging to return Syrian refugees back across the border. “He’s not the only target,” Chamoun says. “We want to get rid of all [the politicians].”

Young men on a motorcycle at a mass protest in Beirut on Oct. 18, 2019.
Myriam Boulos

Scrawled on walls across Beirut in Arabic are the words: “Everyone means everyone.”

“We want them all to go out of the country, but before they go, we need our money,” says 40-year-old Nour Swaidan, pledging to continue the protest. “We need all the money that they stole.”

When were the last protests in Lebanon?

The last time Lebanese took to the street in such large numbers was after the assassination of then-Prime Minister Rafik Hariri in February 2005. Many blamed occupying Syrian forces and hundreds of thousands filled Martyrs’ Square. In April 2005, the Syrian troops withdrew from Lebanon. Those demonstrations were led by some of the very politicians being cursed in the chants and tweets of protesters today.

A decade later, garbage piling up on the country’s streets brought tens of thousands of protesters to the streets of Beirut. The government announced several plans to address the garbage crisis, but the country still lacks a sustainable waste management plan.

This week’s protests are larger and spread across the country, from the northern city of Tripoli, down to Tyre in the south.

“Your movement is what led to these decisions that you see today,” Hariri said. Protesters watched Hariri’s speech near the city’s iconic blue domed mosque named after his father Rafik Hariri, who also served as Prime Minister and was assassinated in 2005.

The political parties now controlling the Lebanese government have dominated for decades, since the end of the country’s civil war in 1990. Most of the main party leaders today were warlords themselves. And often, when they leave office, their son or relative takes over.

Chants of “Revolution, revolution” erupted as Hariri finished and more people descended on Martyrs’ Square holding Lebanese flags and chanting “the people want the fall of the regime.”

Will the protests carry on?

People were back in the streets on Tuesday. Most here say they don’t trust their politicians. “There is a saying, ‘fool me once, shame on you. Fool me twice shame on me,” says protester Ghassan Arbid. He says the Lebanese government has promised changes before and not followed through.

On the protest-filled street leading to the country’s parliament last night—a woman sat at a table, inviting demonstrators to suggest names for a transitional council for the country. The names laid-out on the table included a few former MPs, seen by some as outside the system. Some people struggled to come-up with names, jokingly suggesting relatives.

Demonstrations in Lebanon are often called for by party leaders and people come to the street carrying party and sectarian flags. Some protesters say these leaders have fostered sectarian divisions to help keep them scared and oppressed.

Crowd singing the national anthem at a protest in Beirut on Oct. 21, 2019.
Myriam Boulos

Protests seem to have risen above the divides that caused so much turmoil in the past, rejecting their sectarian leaders and the system that has kept them in power.

“They think the people are herds of sheep,” says a man who gave his name only as Bashara. “But they don’t understand. The people aren’t sheep anymore.” 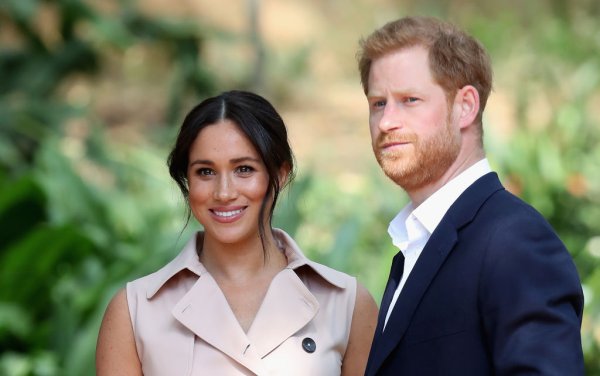 Prince William 'Worried' About Harry After Interview About Mental Health
Next Up: Editor's Pick