For the first time since his surprise resignation more than ago week, Lebanese Prime Minister Saad Hariri appeared live on television Sunday night. “I can leave Saudi Arabia whenever I want,” he told the interviewer, pledging to be back in Beirut “soon.”

Since Hariri stepped down on Nov. 4, Lebanon has united in demands for him to return home. In Beirut’s central Martyr’s Square, billboards bearing the face of Hariri have been erected, with the words “waiting for YOU.” The website freesaadhariri.com satirically counts the seconds since he resigned in a televised address from the Saudi capital. “Free Lebanon’s Prime Minister Saad Hariri from the Saudi Arabia Jails!” the site demands.

In his resignation speech, Hariri blamed the Lebanese movement Hezbollah and its backer Iran for the instability in his country and the region. Hezbollah and Hariri have long been at odds; in fact, a U.N.-backed tribunal accused five Hezbollah members of involvement in the 2005 assassination of his father, the former Prime Minister Rafik Hariri. But since last year, Hariri has been leading a coalition government in which Hezbollah is a partner, and which had managed to provide a little stability in Lebanon.

The week of silence that followed only fueled rumors that he was forced to resign by his long-time supporters in Riyadh and that he is being held against his will. Lebanese President Michel Aoun told foreign ambassadors Hariri was “kidnapped.”

Few in the Lebanese capital believe Hariri stepped down on his own volition. Most speculate that he’s being prevented from returning to Lebanon, which Saudi officials have denied.

While some celebrated, honking car horns in the streets of Beirut, after Hariri’s Sunday interview and pledge to return, many here remain skeptical that Hariri is a man of free will. “I’ll believe it when I see it,” says Souheil Saade, a shopkeeper in one of Beirut’s Christian districts, of Hariri’s return. Pundits debated Hariri’s body language in the Sunday interview and speculated about a man who appeared briefly in the interview room, holding what seemed to be papers. Some said Hariri looked sad, on the verge of tears. All signs suggest he is under some kind of house arrest, people here say.

“I’m not with him politically at all,” says Saade. “But I love him. He is my Prime Minister.”

Hariri might not have been a wildly popular Prime Minister across Lebanon’s sects and political parties, but calls for his return have cut across party political lines.

The first call was from his once-top political rival, Hezbollah leader Hassan Nasrallah. Known for his fiery speeches, Nasrallah was unusually calm. “The resignation was a Saudi decision dictated to Prime Minister Hariri,” he said in a televised address. “He was forced into it. The resignation wasn’t his intention, desire or decision.”

What is still murky is why Saudi Arabia, a long time supporter of Hariri, would want him to step down. The kingdom is an important patron for the tiny Mediterranean state and a supporter of Lebanon’s national army. Until Nov. 4, Hariri had been their man in Beirut.

“They were dissatisfied with Hariri’s so-called appeasement of Hezbollah,” said Dr. Bessma Momani, a Senior Fellow at the Centre for International Governance and Innovation. “They feel as though…what should be a client state, is acting far too independently and Saad Hariri is the fall guy for that,” said Momani.

The fear is that Hariri’s absence is upsetting the fragile political balance that has been keeping the peace in Lebanon, despite the war raging next door in Syria. “Lebanon is a tinder box in an already troubled region,” Momani added. “Worst case scenario is a military conflict, perhaps more immediate is some sort of economic crisis.” Lebanon has one of the world’s highest debt to GDP ratios.

Like many here, Saade, now in his fifties, says Lebanese aren’t interested in a conflict. “I fought here in 1975,” he says, pointing to the street outside his shop. “No one here wants another war.” But he also knows it may not be a Lebanese decision, saying his country has always been used as a “court” for regional and international powers to violently sort out their differences.

Saudi Arabia and Iran are in competition for regional influence. In Lebanon, Iran has Hezbollah, and Saudi Arabia had Hariri. In his Sunday interview, Hariri indicated he could rescind his resignation, laying out some vague conditions, mostly aimed at Hezbollah.

The fear is, that competition for influence—already fueling the conflicts in Yemen, Iraq and Syria—may now play out in this Lebanese “court” to violent ends.

Many here are frustrated by the prospect. “Lebanon is the playground for all the countries. Everyone has its own Lebanese party,” says Elie Khoury in his sandwich shop in Beirut. “It’s enough. We want all the international interference to stop.” 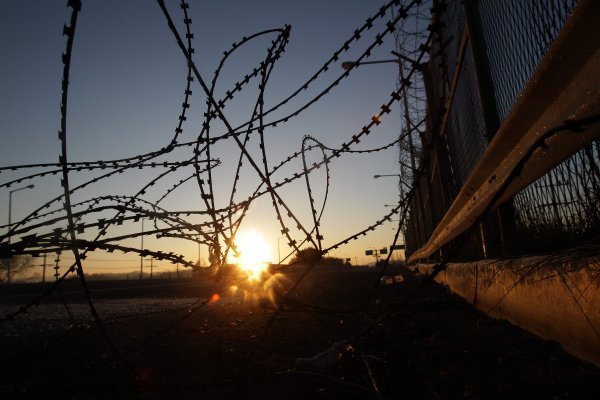 Louisiana Man Arrested After Trying to Cross into North Korea for 'Political Purposes'
Next Up: Editor's Pick