Middle schoolers raising their hands to answer a question in class.
Getty Images
By Olivia B. Waxman

JoAnna Wood was in fifth grade when her class watched the movie of The Indian in the Cupboard. At one point in the 1995 film, a cowboy calls an Indian a savage. Her fellow students cracked up.

“I didn’t think it was funny,” says Wood, 12, who is a member of the Winnebago tribe and lives in Tekamah, Neb. She didn’t blame her classmates too much for not knowing the historical weight behind that word — “kids don’t know what ‘savage’ means,” she says — but the moment stood out. It also came just about a year after she and her mother Michelle Stark overheard someone calling Native American basketball players “savages” after they beat a school with a bigger white population.

“I walked out with my children and didn’t say anything and have regretted that decision ever since,” Stark recalls of that game. “Having my kids with me, I didn’t want to start a scene, and I didn’t think it would make a difference anyway. But I thought if we don’t change the way people think, and if we don’t teach people to look at different points of view, then that’s never going to change in our country, and that’s never going to change in their world.”

But though she didn’t say anything at the time, the experience led Stark to apply to help write Nebraska’s new Social Studies Standards. On Friday, the State Board of Education unanimously approved the revision she worked on. And for the first time in state history, the new standards underwent a separate review to check for bias. The result is meant to provide more diverse examples of historical people and events, and to urge teaching the perspectives of “marginalized and underrepresented groups.”

The process of updating social studies standards happens regularly — Nebraska was due for a revision, as the last one came seven years ago — but the extra steps taken in Nebraska are a window into the way that conversation is changing, amid increased public scrutiny of what American students are learning about history.

And in today’s world, those decisions are perhaps more urgent than ever.

“Just thinking back to the 2016 election, we had teachers who were afraid or didn’t know how to engage students in facilitating conversations about that particular election, and we don’t want that to happen,” says Cory Epler, Chief Academic Officer at the Nebraska Department of Education. “We want to help kids engage in civil discourse and present ideas that are factual and grounded in history or geography, to listen and respect and be able to communicate those viewpoints.”

The 2012 version of Nebraska’s social studies standards framed the purpose of such a class as teaching children to be “young patriots” who understand “the genius of our country’s founding principles.” It leads off with a quote from President Ronald Reagan saying that the Founders’ purpose was “not only to teach all Americans how to read and write but to instill the self-evident truths that are the anchors of our political system.” The new standards contain no formal statement of purpose, but lead off with a graphic featuring the words “questioning,” “communicating,” “evaluating” and “applying.” One difference between the two editions can also be seen clearly in the description of what first-graders should be able to learn about civic participation. Both documents include the guidance that students of that age should be able to “identify patriotic symbols, songs, actions, celebrations, and holidays,” but the new standards have added a point to the checklist: students should also be learning about the history behind those holidays, including “the roles that different cultures played in our community/nation.”

Twenty Nebraska educators and community members met in August to evaluate the proposed new standards for bias, using a checklist developed by the Midwest and Plains Equity Assistance Center, in an attempt to make sure perspectives that have often been disregarded were included. Examples of marginalized or underrepresented events and people covered by the state’s new curriculum guidelines include the Stonewall Riots; the United Farm Workers; Susan La Flesche Picotte, hailed as the first Native American woman to receive a medical degree; the Tuskegee Airmen, the African American pilots who served in World War II; and Will Brown, who was lynched in Omaha during the Red Summer, a wave of deadly race riots in 1919.

Though both guidelines made clear that students should be able to understand different perspectives on events, the new set puts a particular emphasis on that practice — for example, comparing accounts of the expanding borders of the United States by settlers from the East, Spanish-speaking people and American Indian peoples. In Nebraska, that last point is key. Though Native Americans make up about 1% of Nebraska’s of the state’s population today, and a very slightly larger portion of the school-age population, Native American history is deeply tied to the history of the state and region.

“We look at other countries and are appalled by massacres in other countries, but we don’t talk about the massacres that happen in our own history,” says Stark, who taught at Walthill Public School on the UmoNhoN (or Omaha) Nation Reservation for 19 years. “I just remember students being bored and not connected. [The version of history that leaves them out] doesn’t represent them.”

Read More: 9/11 Is History Now. Here’s How American Kids Are Learning About It in Class

The question of whose version of history is taught to American students is by no means a new one, but educators and administrators tell TIME they’ve noticed a recent uptick in awareness of social studies standards among the public and the media.

One reason for that shift may be that, as the American student body grows more diverse, more people are likely to feel that the history they’re learning should likewise be incorporating more diverse viewpoints. In addition, amid the divisive atmosphere that has prevailed in national politics since the election of 2016, there’s been more public attention paid to the importance of civic education, says Stefanie Wager, President-Elect of the National Council for the Social Studies. Her organization and social studies educators in general have been fielding more questions about what can be done from a policy perspective to prioritize social studies education.

“Thinking about the health of our democracy has led people to try and step back and say we really need to think about how social studies and history are being taught in schools,” Wager says. She compares the situation to being at a party with young children without a designated babysitter: “You kind of think everybody is watching the kids, then you realize nobody is watching them. With social studies, there’s been a big assumption from society that we’ve been paying attention to that, but in classrooms, especially at the elementary level, that hasn’t necessarily been the case.”

Several states in the middle of the country have recently taken steps to diversify social studies and civics curricula. In 2018, Indiana high schools started offering an ethnic studies option, and in Illinois, the private Robert R. McCormick Foundation pledged $1 million annually between 2020-2023 to fund civics education resources and professional development for teachers to help schools comply with the state’s new law requiring middle-schoolers to take a civics class.

But this wave of changes has also shown how controversial that task can be. Earlier this year, critics of Michigan’s social studies standards revisions argued the framework was spending more time on LGBTQ rights than on Ronald Reagan and the history of Christianity. Last year, Texas had to walk back changes to the high school U.S. History standards that removed Moses, disability rights advocate Helen Keller and the first female Democratic presidential nominee Hillary Clinton.

Some state legislatures have to approve curriculum changes, but in Nebraska’s case, only the state board of education signs off. Even so, the process does leave room for objections to be raised. For example, some Native Americans communities in the state expressed concerns about a draft open for public comment in April 2019, arguing that it focused too much on the darkest periods of Native American history.

But state social studies standards are only guidelines for teachers, not requirements. Only 21 states require a social studies assessment, not including the states that require the U.S. citizenship test, so there’s not always a way to gauge the impact of these changes — or whether teachers feel as if they have time to follow guidelines for teaching material that won’t show up on a standardized test.

As for Michelle Stark, now a K-12 Curriculum and Assessment Director at Tekamah-Herman Schools in Tekamah, Neb., she hopes that grade-appropriate lesson plans will be developed to help teachers implement the changes. Until then, her daughter Wood, now in 7th grade, is teaching her classmates there about her culture herself, donning her jingle dress and demonstrating the pow-wow dancing she is learning after school.

During the standards drafting process, Stark kept thinking back to that slur directed at the Walthill basketball players in 2016. She believes that, through history and civics, schools can play a vital role in teaching people not to dismiss other cultures.

“It’s very difficult to change how adults think,” she says, “but if we are teaching our children to look at different points of view, that’s where the change is going to happen.” 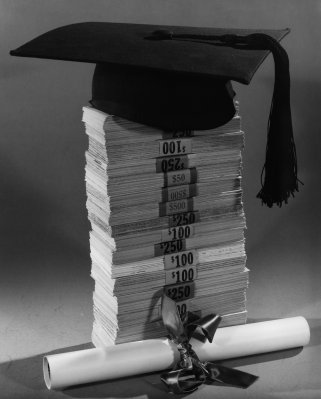 How the Student Debt Complex Is Crushing the Next Generation of Americans
Next Up: Editor's Pick