The Far Right Lost Power in Italy Two Months Ago. So Why Are Migrant Rescue Boats Still Being Refused Entry?

In late August, Italy’s anti-migrant Interior Minister Matteo Salvini was ousted after his ruling coalition collapsed, bringing a symbolic end to a government whose signature policy was closing Italy’s ports to ships carrying rescued migrants. But two months on, those same ships are still being stranded in the Mediterranean.

On Tuesday, 11 days after becoming the latest boat to be forced to wait stranded in the Mediterranean sea, the Ocean Viking, a rescue ship carrying 104 migrants, was finally granted access to an Italian port.

It had picked up the occupants of a rubber boat off the coast of Libya, a country that asylum seekers cannot be legally returned to because of human rights abuses. But after heading north, Italian authorities refused the Ocean Viking permission to dock—in much the same way that they did to dozens of ships when Salvini was in power—and only changed their position after the French, German and Italian governments agreed on a plan to resettle the migrants on board.

Salvini came to power in June 2018 promising to curb migrant arrivals to Italy, where more than 119,000 people arrived by sea in 2017. “Italy has been receiving and holding refugees and migrants for years, without any support from the rest of Europe,” says Agnes Callamard, the U.N. Special Rapporteur for extrajudicial executions. “The problem is with the E.U. being unable to abide by its full commitment to take its share of migrants. Italians, when they elected Salvini, said enough is enough.”

E.U. interior ministers met in Malta in September, shortly after Salvini fell from power, to hold what were billed as potential breakthrough talks for creating an agreement between E.U. countries to share migrant arrivals, relieving the burden on Italy. An agreement was struck there, but only between four countries: Italy and Malta (both coastal countries where migrants arrive) and Germany and France, the E.U.’s two central powers.

“The only thing we can say, after spending 11 days at sea, is that such an agreement doesn’t seem to work,” Louise Guillaumat, the deputy director of SOS Méditerranée, the NGO which operates the Ocean Viking, told TIME on Tuesday evening as the boat was on its way to the port of Pozzallo in Sicily where those on board would be disembarked.

“The sad result of that is that it ended up with people dying at sea,” Guillaumat says.

Even though Salvini out of power, the core dispute between Italy and the rest of the E.U. on what is to be done with the migrants on board rescue ships has not been resolved. “When a relocation agreement is settled, Italy is willing to open its ports,” Guillaumat says. “But there are few E.U. member states willing to welcome people into their territory and support the coastal states” of Italy and Malta.

Conditions for migrants in the Mediterranean have grown steadily worse since 2015. That year, more than 1 million people crossed the sea to Europe, and fewer than 0.4% drowned on the way. As numbers crossing the sea fell, largely thanks to preventative measures imposed by the E.U. and its member states, the deadliness of the journey increased. In 2019 so far, more than 1% of people making the journey have died. “The central Mediterranean is still the deadliest migration route in the world,” Giullaumat says.

A contributing factor has been the regular standoffs between rescue ships and European authorities, which reduces the chances of migrants in distress being saved. “Waiting at sea means we are not operational any more,” Giullaumat says. “While being stuck in that standoff, we saw a lot of distress calls happening and we don’t know what happened to the people. Either they died or they were sent back to Libya.”

— With reporting by Jasmine Aguilera/New York 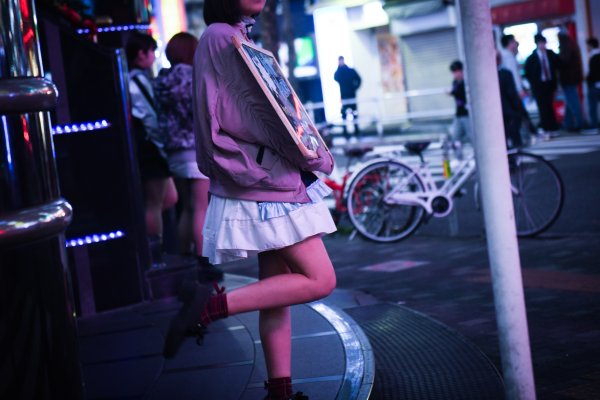 Sexual Exploitation of Young Girls in Japan 'on the Rise'
Next Up: Editor's Pick