Italian Prime Minister Giuseppe Conte announced his plan to resign on Tuesday, causing the collapse of the Italian government. Conte’s move is a high-stakes political maneuver intended to stop his right-wing deputy, Matteo Salvini, from gaining even more power.

Earlier this month Salvini moved to bring down the government, and Conte accused him of doing it for his own political gain. “[Salvini] has shown that he is following his own interests and those of his party,” Conte said in a speech announcing his intention to resign. “His decisions pose serious risks for this country.”

It’s the latest political drama in a country that struggled to form a government after the 2018 elections and has had six prime ministers in the last 10 years.

Salvini, who is also the leader of the populist League party and the current interior minister. His party received the third-most votes in Italian elections in 2018, but formed a coalition government with the first-place 5 Star Movement. His popularity has surged since, however––at least partially off the back of his tough anti-migrant stance. Recent opinion polls gave his party approximately 38% of the electorate, nearly enough to control the government without a coalition partner––if he can translate the popularity to election success.

But Salvini’s opponents are hoping to delay elections, which could dampen his chances of becoming prime minister.

Here’s what to know about the Italian political crisis.

Conte’s resignation was the culmination of a long waiting game. Salvini had hoped to force elections to occur in October, just before the Italian budget season, betting that he could win the election and have the power to immediately enact his agenda as prime minister.

That would mean he would avoid another fraught budget negotiation with his coalition partners in the 5 Star Movement, an anti-establishment party, which resulted in a compromise last time around. “Everything was about getting Salvini into the driver’s seat before the budget,” says Erik Jones, an Italy expert at the Johns Hopkins School of Advanced International Studies.

To achieve his goal, earlier in August Salvini announced he would refuse to support his own coalition government, which has only been in power 14 months, hoping it would force Conte to resign. But instead of going immediately, Conte decided to delay his exit for as long as possible, in an attempt to prevent elections from being held before the budget season.

Conte, who is an independent, became prime minister in June 2018 after a three-month negotiation between the two biggest winners of the March 2018 election––League and the 5 Star Movement.

For the last week or so, Jones says, Conte has been negotiating with the 5 Star Movement and the Democratic Party over whether they could form a left-leaning majority in Parliament that doesn’t include Salvini’s League party, thus avoiding elections.

“That is exactly what Salvini wanted to avoid,” Jones tells TIME.

Who is Matteo Salvini and why does he want to become Italian Prime Minister?

Conte is a former law professor who officials plucked from relative obscurity after the last Italian elections in order to front the coalition government––between the 5 Star Movement and Salvini’s League––when neither party could agree on the other’s candidate for the job.

As the interior minister, Salvini has capitalized on Italians’ hostility toward migrants to ride higher in the polls than his coalition partners. “His popularity is at its peak right now,” Jones says. “Salvini has taken a very aggressive stance against illegal migration in Italy, in both in terms of the number of migrants arriving, and in terms of the stock of migrants that are already in the country. And this has proven to be very popular with the electorate.”

Salvini has also mounted attacks against NGOs that have rescued migrants in the Mediterranean Sea, refusing their boats access to Italian ports. As he listened to Conte’s resignation speech in Parliament in Rome, two boats were stranded in the Mediterranean carrying more than 500 people – many bearing the signs of torture from inhumane detention camps in Libya – after he refused them permission to dock in Italian ports.

Just hours after the high political drama in the Italian parliament, Salvini was back to tweeting about migrants. “Another landing, another process? I’m not afraid, I’m proud to defend the borders and security of my country,” he wrote, in reference to one of the stranded ships.

But Salvini knows the popularity he enjoys off the back of his anti-migrant populism could decline at any time––especially if Italians are forced to weather sales tax rises because of another compromise budget with the 5 Star Movement, who have different spending priorities.

“He doesn’t want to watch these financial negotiations take place, because the budget that needs to be agreed this fall is an incredibly complex negotiation where a huge amount of money needs to be found,” Jones says.

Salvini, though, is projecting confidence. He was seen repeatedly kissing a rosary while seated next to Conte as he delivered his resignation announcement. Salvini also defended his actions, telling the Italian Senate that he would “do again everything I did… I’m a free man and I don’t fear Italians’ judgment.”

Now that Conte has resigned, the steering wheel is in the hands of Italy’s President, Sergio Mattarella. He will likely to search for a new coalition to govern Italy with the existing members of Parliament.

That, Jones says, “could drag things out even further, which would scupper Salvini’s plans.” That’s because it’s unlikely that Mattarella want fresh elections as the Italian government is tasked with negotiation its budget.

If elections aren’t held before the end of November, Jones says, then there’s no reason not to install an interim, unelected caretaker government. “That’s what Salvini wants to avoid, but it looks like he may have miscalculated.”

The original version of this story misstated the results of the 2018 Italian election. Salvini’s party, League, came in third, not first. 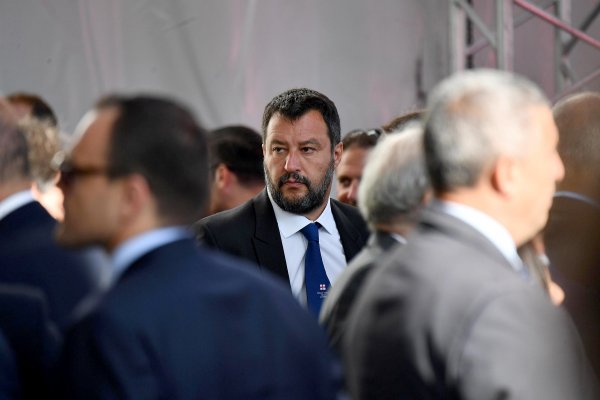 Italy’s Populists Gamble on New Elections and Turmoil
Next Up: Editor's Pick