The Medieval History Behind Our Halloween Fascination With Skeletons

You may have seen a fair few skeletons of late, prancing around your cookie packaging or littering your neighbor’s porch. But a fascination with our bodies’ bones goes back much further than modern Halloween merch — all the way to the Middle Ages.

Skeletons were particularly important to medieval thinkers and writers working in Europe and the Middle East, who knew that the bones formed the body’s foundation, a structural framework around which everything from muscles and nerves to veins and flesh were wrapped. Early medieval authors described most parts of the skeleton thoroughly in their medical treatises, individuating their different functions: the ribs fortified the chest, the skull protected the soft brain beneath, the clavicle—from the Latin, clavicula, meaning “little key”—locked the arms to the chest at the shoulder. Still, there was not always certainty as to the tally of bones the body contained. We now total them at 206, but medieval writers tended to stump for a few more. Some counted 229, while others maintained that men had 228 bones, two more than women who had 226. Others thought specifically that men had one fewer rib than women, a single bone missing in an echo of Genesis, which told of God creating Eve from Adam’s side.

This confusion was not the result of anatomical ignorance. Rather, it was a more practical problem. Bones don’t just sit inside the body as a clean, white and easy-to-count skeleton. Creating something like this from a cadaver first requires the removal of the tough tendons and ligaments that bind the muscles to them. Limbs and other body parts have to be carefully boiled to loosen the fibers of these fleshy elements and encourage the core to slip out. This was a time-consuming business, and in medieval Europe opening up the body in such a way was met with the same obvious social reservations as today. It was only later, in the Early Modern period, that the construction of traditional anatomical teaching skeletons rose to prominence.

Medieval bones, then, were frustrating things: clearly important and well-understood, but unattainable and interior beneath the skin. We see this contradiction at work when skeletons are illustrated in medical books of the time. Most feel slightly askew. The skull is there, but with only some of the jagged suture-lines that run outwards from its center. The squared-off jawbone is sometimes shown correctly as an independent piece, but more often is fused with the cranium to form one strange giant bone-head. The pelvis, too, has a tendency to be shown warped and curvy as if combined with the sacrum into a single semi-circular unit. And piano-key spines extend from the neck to the coccyx with the ribs flourishing outwards, but often without individual vertebrae, appearing just as a single wobbly line running down the back.

In practical terms, however, medics across the medieval world knew precisely what do to with troublesome bones, offering a well-established repertoire of osteological treatments. The Persian author Mansur ibn Ilyas (c.1380–1422) wrote of resetting fractured or broken bones using braces and tight bandaging to immobilize and realign limbs, followed by the application of various salves and medicaments to help the bones heal. Dislocations and their treatment—what the influential Italian surgeon Teodorico Borgognoni (1205–1298) referred to as “the joining of the disjointed”—could also be addressed through the firm manipulation of the affected limb under traction, with stretching force applied to the area either by hand or using a number of innovative devices. For hip dislocations, the lower legs would be bound together at the shins and a small animal-skin bag inflated between the thighs, popping pelvic joints back into place. For the spine, elaborate wooden racks would be used in conjunction with the surgeon’s body weight to palpate or stretch the patient. Such stretching alone would probably have provided little long-term help, but might well have lessened the pressure on crushed nerves and reduced the spasming of over-extended muscles, giving the patient some genuine relief.

Set against these more hopeful concerns of healers, who thought they could tend to and revive the living skeleton, was the near-constant presence of the bones in medieval cultures of death. This was perhaps their most blunt and by far their most prominent role in the Middle Ages, a marker of people’s intimate and public relationship to the realities of living and dying.

Where bones finally came to rest could be extremely important — a site of sadness, joy, memory and spiritual exchange between the dead and the living. For most in the period, designating where one wished to be buried was something undertaken while still alive, sometimes long before reaching old age or sickness. Honoring such wishes were thought particularly crucial, especially in the case of high-status individuals.

Given their extreme wealth and easy ability to travel, it was not uncommon for kings or queens, sultans or emperors, to die some distance from the pivotal political centers of their realms. And as their bodies could hold substantial dynastic currency to both their followers and their nation, successors could find themselves with the difficult job of transporting posthumous remains some distance to a place appropriate for a sufficiently momentous burial. Moving corpses across continents, though, was not easy. After the death of the Carolingian king Charles the Bald in the Alpine town of Avrieux in 877, his body was gutted and stuffed with aromatic preservatives, salt and wine to facilitate its intact return to the Cathedral of Saint Denis, more than 300 miles away, on the outskirts of Paris. Alas, so strong was the body’s nauseating stench that the King’s party could only take him as far as nearby Nantua. It was seven years later that what remained of his body was disinterred and returned to the capital by a particularly devout and adventurous monk. While such removal was streamlined somewhat over the centuries, it still remained a momentous undertaking. When King Louis VIII of France died in 1266 in the Auvergne, his followers were presented with a journey of similar complexity and distance. This time, the corpse was salted, wrapped in waxed cloth, and sealed into a stitched-up cowhide to save the noses of those who bore his bones.

As such powerful markers of death, the medieval bones could also be made into more fantastical things. Take the opening stanzas of the Middle English poem The Dance of Death by John Lydgate. Writing in the early 15th century, his poetry formed a central part of an emerging late medieval interest in the macabre. There was, its first lines suggest, both a frequency and a universality in the way people saw death: cruel Death, “so wyse and sage,” slays all, from those of low descent to Popes and Kings. But rather than presenting his poem as a mournful lament, Lydgate goes on to extract broader moral ammunition from this supposedly ghastly situation. The piece continues as a tragicomic rumination on the power of dying, phrased through a series of unfolding dialogues between people of different social status—from an Emperor and King down to a laborer and a child—with a strange, skeletal personification of Death, who beckons them in turn to dance.

To the modern mind, a poem like this or the many surviving medieval artworks depicting frolicking skeletons and gruesome skulls can all feel rather graphic. They encourage us to presume that the medieval past was unrelentingly grim, with the bones meeting the eye uncomfortably often. But mediated by a firm belief in religious afterlives and the strong healing power of medicine, these representations would be unlikely to have had the same shocking impact on their original owners as they have on us.

True, there is no doubt that medieval bones were morbid things, irrevocably associated with death, the pain of grief, the sorrow of mourning. But to see this as a backwards medieval obsession is wrong. More apparent to medieval men and women would have been the sophisticated range of ways one could approach bones: fearful yes, but also respectful, hopeful, even playful — much like our Halloween decorations today.

Jack Hartnell is Lecturer in Art History at the University of East Anglia and the author of Medieval Bodies: Life and Death in the Middle Ages, available soon from W.W. Norton 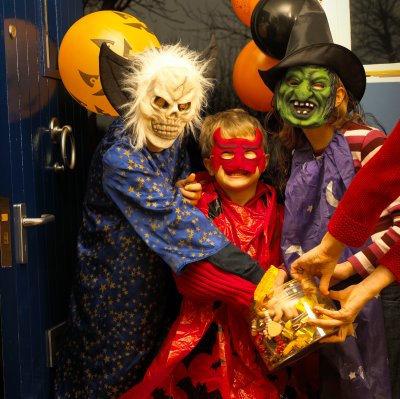 Should Christians Celebrate Halloween? Here's Why That Question Has Been Picking Up Steam Since the 1960s
Next Up: Editor's Pick