Trump Keeps Talking About Syria's Oil Fields. Here's What's Going On With Them

As the Trump administration pulls American troops away from Syria’s northern border, the President has repeatedly insisted that the region’s oil has been “secured,” even going so far as to suggest the United States is now responsible for the fate of the oil.

“We’ve secured the oil and, therefore, a small number of U.S. troops will remain in the area where they have the oil,” Trump said during an Oct. 23 press conference. “And we’re going to be protecting it, and we’ll be deciding what we’re going to do with it in the future.”

Indeed, further complicating an already confusing shift in Washington’s Syria strategy, U.S. Secretary of Defense Mark Esper said Thursday that an unspecified number of American troops and materiel are being sent to defend oil fields in eastern Syria held by Kurdish forces. They were key U.S. allies in the fight against ISIS, but the American withdrawal opened the door for Turkey, which views the main Kurdish militia in Syria as a threat, to launch an offensive against the group.

From the Kurdish forces to the Syrian government, the oil fields are vital to actors within Syria, experts say. What’s less clear, however, is whether Trump or the U.S. more broadly can determine what happens to the oil, as the President suggested he has the power to do. Moreover, experts say Trump’s focus on the topic fits into a broader pattern of fixating on Middle Eastern oil, which he has often suggested “taking” as compensation for U.S. military activity in the region.

Here’s what to know about Syria’s oil fields, and why President Trump keeps mentioning them.

Why are Syria’s oil fields important?

Before the Syrian civil war began in 2011, Syria produced about 385,000 barrels of oil per day, says Jeff Colgan, a political science professor at Brown University and author of Petro-Aggression: When Oil Causes War. The majority of that oil came from the fields in the country’s northeast.

As Syria descended into bloodshed, The Islamic State in Iraq and Syria, or ISIS, took advantage of the chaos and began to grow in military strength and in territory. Eventually, it took over oil fields, the proceeds from which helped fund the group’s sprawling operations.

Targeting the oil fields helped the U.S. and its allies strip ISIS of its territory. “A big part of the strategy of defeating ISIS was actually to try to disrupt the oil supply chain, to take out tankers carrying oil, or to destroy any kind of refineries, any sort of ISIS oil operations,” says Colgan. ISIS lost control of the oil fields in 2017 amid fighting with the Kurdish-lead, American-backed Syrian Democratic Forces, or SDF. “The net result was Kurdish forces and U.S. forces helped occupy the territory where the oil fields are,” says Colgan.

Late in the fighting, ISIS forces destroyed much of the oil infrastructure. But Kurdish forces have since been able to repair some of the damage, says Dareen Khalifa, the senior Syria analyst for International Crisis Group, another think tank. Revenue from the fields has helped support the Kurdish forces in the area, who use the money to pay fighters and civil servants.

Why is the U.S. keeping troops in Syria to defend the oil fields?

After the White House’s Oct. 6 announcement that American troops were being withdrawn from Syria’s border with Turkey ahead of a planned Turkish offensive against Kurdish forces, critics on both sides of the aisle accused Trump of abandoning Washington’s Kurdish allies. In a statement, the SDF called the U.S. withdrawal a “stab in the back;” locals reportedly pelted American vehicles with rotten fruit and potatoes as they left. Others say the move destabilized the region more broadly, in part by triggering a humanitarian crisis that has displaced hundreds of thousands of people.

Trump has repeatedly defended the decision to leave the Syrian border, saying the Kurdish forces are “no angels,” arguing that “it’s not our border,” and describing the conflict as “like two kids in a lot, you’ve got to let them fight, and then you pull them apart.” The President caused further confusion Thursday when he tweeted that “perhaps it is time for the Kurds to start heading to the Oil Region;” what he meant by that was unclear. Meanwhile, Turkey’s offensive against Kurdish forces continues despite an American-crafted ceasefire. And Russia, Washington’s longtime geopolitical foe, has sent troops to the region, in part filling the power vacuum left by the American absence.

Some say the American pullout could result in the reemergence of ISIS, which has lost all of its territory in the region. Before October, thousands of suspected ISIS fighters were being held in Kurdish-run prisons in Syria. But with the Kurdish forces now pivoting to defend themselves from Turkey, they have fewer resources with which to mind the prisons. The White House has insisted the prisoners are now Turkey’s responsibility, but the chaos has given many the chance to flee, as hundreds of detainees have reportedly done.

If and when ISIS regroups, it may target the oil fields that proved so lucrative in the past. During this week’s press conference, Defense Secretary Esper said U.S. troops are defending Syria’s oil fields in order to keep ISIS from regaining control of them. “If ISIS has access to the resources, and therefore the means to procure arms or to buy fighters or whatever else they do, then it means it makes it more difficult to defeat ISIS,” he said.

Leaving some troops behind to help defend the oil fields while pulling others out elsewhere could be Trump’s way to try to achieve his isolationist goals while avoiding an ISIS renaissance, experts say.

“The President is very keen to pull, or at least have the appearance of, pulling back military troops from the Middle East,” says Colgan. “But at the same time that exposes him to the criticism that this could … lay the grounds for ISIS to reconstitute itself. And the oil fields would be a key part of that, so understandably he’s focused on preventing that possibility.”

Could ISIS regain control of the oil fields?

“Probably not in the very short term, but yes,” says Colgan. “Having done it once already, I think ISIS had proved that this is a possibility.” Khalifa, the International Crisis Group analyst, says that she doesn’t believe ISIS has a chance of retaking the fields, but she believes it could attack them. Ibrahim Al-Assil, a scholar at the non-partisan think tank The Middle East Institute, says ISIS lacks the military capability to retake the fields, but says it might have the strength to do so in the future.

Al-Assil also argues that Washington is likely concerned about other actors who might take control of the fields absent an American presence. “I think it’s part of the maximum pressure campaign the Trump administration has on Iran, Syria, and their allies in the region,” he says.

The oil fields could be a particularly tempting target for the Syrian government forces, controlled by Bashar al-Assad. The Assad regime is under tight economic sanctions, making it difficult for Damascus to acquire oil. And with winter quickly approaching, demand for oil will only increase.

“The U.S. administration doesn’t want the [Assad] regime to benefit from the withdrawal and be able to alleviate the economic pressure it’s going through by re-controlling the oil fields,” says Al-Assil. He adds that there’s a chance that the Kurdish forces in the area and the Assad regime, who formed an alliance of convenience to work together against Turkey after the American withdrawal, could strike a deal to return the oil fields to government control.

Why is President Trump so focused on Middle Eastern oil?

Trump’s repeated statements about Syria’s oil over the past few weeks fits into his larger pattern of focusing on Middle Eastern countries’ oil supply. He has, for example, repeatedly lamented that Washington did not “take” oil from Iraq amid its war there. “I still can’t believe we left Iraq without the oil,” he tweeted in 2013. “I always said, ‘take the oil,'” he told Matt Lauer in 2016. And Trump fiercely responded to attacks on Saudi Arabian oil production earlier this year, deploying around 14,000 more troops to the Persian Gulf in the aftermath.

It’s unclear how the United States could legally “take” oil belonging to Iraq or any other sovereign nation. But Colgan describes Trump as having a “fixation” on U.S. oil interests in the region regardless. “[He has] a kind of transactional understanding of the relationship between the United States and various players in the Middle East where oil is the payment for U.S. military protection,” Colgan says.

Dana Stroul, a fellow at the Washington Institute of Near East Policy, adds that American officials may be pushing Trump to keep some troops in Syria to fight ISIS and to act as a counterbalance to Russia’s presence there, and “have settled on this notion of protecting this oil as an argument that would be compelling” to the President, given his fixation on the issue.

The original version of this story misstated Jeff Colgan’s last name. It is Colgan, not Cogan. 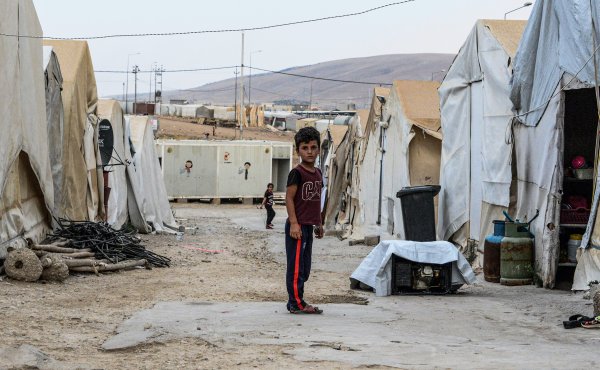 Yezidis in Iraq and Syria Fear Fresh Persecution After Turkey's Offensive
Next Up: Editor's Pick