The Syrian Civil War Has Raged for 7 Years. This Is What the U.S. Can Do to Help End It

Smoke rises during Syrian government bombardment on the rebel-controlled town of Arbin, in the besieged Eastern Ghouta region on the outskirts of the capital Damascus, on late March 11, 2018.
Ammar Sulieman/AFP/Getty Images
Ideas
By James Stavridis
Admiral Stavridis (Ret.), a TIME Contributing Editor, was the 16th Supreme Allied Commander at NATO and is Vice Chair, Global Affairs at The Carlyle Group and Chair of the Board of the Rockefeller Foundation. He is the co-author of 2034: A Novel of the Next World War. His new nonfiction book is To Risk It All: Nine Conflicts and the Crucible of Decision

Eastern Ghouta is burning. In the region just east of Damascus, thousands of civilians are dying as Syrian government forces crush the remaining rebels. The U.N. Security Council ceasefire passed on March 3rd was dead on arrival. With no enforcement mechanism or means to hold Syrian President Bashar al-Assad accountable, pro-Assad forces continue to shell the area with impunity. A ground offensive has ramped up, and a monitoring group has reported chemical attack in East Ghouta. Russia, which is the Syrian regime’s principal backer and arms supplier, proposed a humanitarian “pause” from 8 a.m. to 2 p.m. daily, with a “humanitarian corridor” for civilians to flee the besieged areas. But the fighting simply rages on.

On March 15, Syria will face the seventh anniversary of its civil war. More than 400,000 Syrians have died, according to most estimates. Well over 11 million have been pushed out of their homes, often to refugee camps in neighboring nations. Millions of Syrians live in refugee camps in surrounding countries. Syria now resides among the worst post–Second World War civil conflicts, joining the Balkans, Rwanda, the killing fields of Cambodia and the long Colombian insurgency in terms of sheer brutality, inhumanity and lethality.

What can we do?

Tragically, as it stands today, the U.S. is essentially a bystander. The Trump Administration has on cruise control the same ISIS-centric policies of the Obama Administration. The small contingent of U.S. troops present in eastern Syria only marginally stabilize territory liberated from the Islamic State while preventing Iranian and Syrian government forces from seizing the region. The Trump Administration has ended the CIA’s arm-and-equip program for the Syrian moderate opposition, a program which was created under President Obama, which was never sustainable or substantial. In effect, the U.S. has allowed whatever leverage it had on the ground to atrophy significantly.

This is a mistake for the U.S. It cedes the region to Russia and Iran; puts at risk our closest ally in the region, Israel; discourages our friends in the Sunni world (Egypt, Jordan, Saudi Arabia and the Gulf states); and continues the drift of Turkey out of the trans-Atlantic sphere, weakening NATO significantly. After Assad, the big winner of the civil war is Vladimir Putin, who has gained greater power at minimal actual cost. Because he has employed proxies, there have been few Russian casualties. The Russian public sees Putin as a strong global actor who gets things done. Meanwhile, they see the U.S. as weak and distracted by its daily domestic drama. We must get into the game or risk being permanently marginalized in a crucial region of the world. Here’s a plan for how.

First: Find a way to deliver aid. The U.S. must work with the international community to find an effective means of getting resources to the region. The stream of videos coming out of Ghouta shows a population subjected to the worst conditions imaginable. We should take the lead in enforcing United Nations demands for a real cease-fire to alleviate this brutal suffering. We can save lives now.

Second: Repair relations with Turkey. In the end, U.S. policy in Syria rests on the U.S. and Turkey working together. Turkey is currently engaged in Operation Olive Branch against Syrian Kurds in the northern Syrian city of Afrin, to stabilize its own southern border and to prevent the establishment of a Kurdish statelet. The problem is that the U.S. relied on the Kurdish Syrian Democratic Forces as our partners on the ground in its counter-ISIS campaign.

Rather than build up a more credible, long-term coalition of Syrian Arab forces, the U.S. built its campaign to defeat ISIS around the Kurds, despite the long-standing objections of Turkey. While the campaign against ISIS proved successful, it is not sustainable to stabilize former ISIS-held areas with a Kurdish ground force that is not credible to Syrian Arabs and is vehemently opposed by a NATO ally.

Only Turkey has the credibility, resources and geopolitical heft to steward U.S. interests in Northern Syria. Alternatively, if left unmanaged, Turkey can spoil America’s plans. We need to consider a Turkish security zone, which can function as a military and humanitarian buffer in Northern Syria. This is a NATO border that we are sworn by treaty to protect. We must construct a workable modus vivendi.

Third: Threaten additional, immediate sanctions of Russia. Putin is directly responsible for the Syrian government’s actions. Options at the U.N. have been exhausted. Accountability mechanisms are non-existent — even investigative mechanisms like the U.N. probe into chemical attacks in Syria have been undermined and curtailed by Russian veto. The U.S. must work without European partners to let the Russian public know that there are consequences for Putin’s policy decisions. This should happen in the lead-up and after the March 18 presidential election.

Fourth: Seriously consider a partition of Syria. This was the solution applied in the Balkans and in Sudan in order to deal with virulent civil wars some years ago. While neither case has worked out perfectly, most observers would agree that the results have been better than simply allowing the wars in both regions to rage on. One option to discuss might include something less than a full-blown separation but rather a federated system, determined through an international diplomatic process. This would allow the Alawites in the east to continue under Assad (at least for the time being) but would allow some level of Sunni autonomy elsewhere.

There will be no winners in the Syrian Civil War, and the reconstruction costs of returning the country to even a minimal level of functioning will be enormous. Neither Russia nor Iran alone can afford to support it, and the Syrians will bear the costs of this debacle for decades to come. The U.S. should not seek to solve the problems unilaterally, but neither should we simply continue to ignore the ongoing humanitarian and geopolitical disaster that is unfolding before our eyes. We can help lead an international effort to impose a ceasefire, provide humanitarian assistance, immediately end the use of chemical weapons, and create a sensible political path forward with a partition or a federated system. 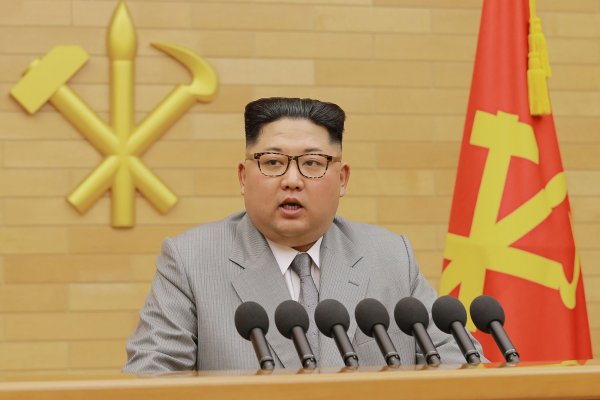 Is Kim Jong Un Gaming Donald Trump? Why Talks May Come to Nothing
Next Up: Editor's Pick