What Happens Next in Syria After Turkey's Invasion

Earlier this week, President Donald Trump announced that the U.S. would pull back from the border the few U.S. troops along the border in northeast Syria, clearing the way for Turkish President Recep Tayyip Erdogan to launch his offensive against Kurdish forces in the area. According to reports, Trump did not consult either the State or Defense Departments before taking the decision.

Kurdish fighters have been the strongest U.S. ally taking on ISIS in Syria, but Ankara considers them to be in league with Kurdish groups operating within Turkey. The Turks have been trying to get the U.S. to leave northeast Syria (which borders Turkey) for months; they finally succeeded this week, and wasted little time launching their offensive.

When it comes to Syria, it is always useful to explain who is fighting whom, and for what reason. To wit, here is a (very much) simplified state of play of what’s going on in Syria in October 2019.

Syrian strongman Bashar Assad has won Syria’s civil war, as his forces have recaptured much of Syria’s land. He’s now back in Damascus—a feat only accomplished with the backing of Russia and Iran—both of whom are looking to use Syria to expand their influence in the region. Turkey is no fan of Assad by any means, but their biggest enemy in Syria’s civil war are the Kurds, whom Turkey is worried will use the territory they’ve captured to establish an independent Kurdish state, which has long been the dream of the region’s 25 to 35 million Kurds, roughly 15 million of whom reside in Turkey. The U.S. (along with a broader coalition of Western countries) got involved in Syria under Barack Obama to fight back against ISIS—whose “caliphate” stretched across territory in both Iraq and Syria—but was always wary about putting too many boots on the ground, forcing it to work with whoever was most aligned with that mission while also not being a brutal dictator (Assad) or perennial enemy of the US (Russia/Iran). That happened to be Kurdish rebel forces.

Today, ISIS has lost virtually all the land it controlled at the height of its power. But that doesn’t mean it’s been 100% defeated, though Trump maintains that it has. Nearly 10,000 ISIS fighters from Iraq and Syria are being detained in Kurdish-led Syrian Democratic Forces (SDF) jails, and as many as 2,000 ISIS foreign fighters.

Trump feels that now that ISIS is no longer an immediate threat, he can begin to remove U.S. troops from the country and make good on one of his central campaign promises to bring U.S. troops home. But that also means allowing Turkey to come in and launch an offensive against a group of people that up until last week were US allies. It’s a controversial move—when Trump tried to remove U.S. troops from Syria last year, it prompted the resignation of US Defense Secretary Jim Mattis. But Trump is now desperate for political wins as impeachment hearings bare down. The backlash in the U.S. has been swift, and uncharacteristically bipartisan.

There are three main concerns that both Democrats and Republicans share over the move. The first is the precedent this sets for how America treats its allies; if this is how the Kurds are rewarded for being loyal partners to the US, who would willingly sign up to work with the Americans going forward? The second, and most immediate, concern is what happens to those ISIS fighters being kept in Kurdish-controlled jails—as more Kurds will be needed to fight over the Turkish offensive, the worry is that those jailed-ISIS fighters will have an easier time escaping, and potentially resuscitating an ISIS network that was gasping its last breaths. Third, is that the removal of US troops in Northeast Syria will eventually give way to the removal of the rest of US troops from the country (roughly 1,000 of whom are left), allowing Russia or Iran more influence, and ultimately resulting in a US. with less clout in the Middle East and more enemies.

Turkey wasted little time launching its offensive. When dealing with a world leader as mercurial as Trump, you have to move fast—just because you have an agreement with him on Sunday doesn’t mean it will remain in place till Friday, especially as the domestic political repercussions of those decisions start surfacing. Since Trump announced the move, he has been busy tweeting, which included threats towards Turkey to remain within “limits”, a clear sign that he is feeling the political heat back home. But at this point, facts on the ground have progressed too much for him to backtrack. Congress will attempt to impose sanctions on Turkey to arrest their progress, but they’re unlikely to make a difference.

For Erdogan, this military campaign is a chance for him to boost his flailing domestic approval ratings as he goes after Kurds, a reliable enemy for Turkish politicians. But there is not much long-term strategy behind the risky move—he could end up stuck there for months or years, hemorrhaging money and military resources. And all this assumes that ISIS isn’t revived, for which the US will now hold Turkey accountable—just this week, the White House released a statement saying “Turkey will now be responsible for all ISIS fighters in the area captured over the past two years in the wake of the defeat of the territorial ‘Caliphate’ by the United States.”

Turkey’s move into northeast Syria doesn’t just have to do with Kurds, though. Turkey is currently hosting approximately 3.6 million Syrian refugees (and getting paid $6.7 billion by the EU to do so), but their stay is increasingly unwelcome, especially as the Turkish economy is struggling. Erdogan has promised to relocate at least a million Syrian refugees across the border with the offensive, but that’s not very realistic—Turkey won’t be able to capture enough land, few refugees actually want to go back to an active warzone, and Turkey will face tremendous international blowback if it starts relocating Syrian refugees against their will.

As for the Kurds, they have already begun reaching out to other potential allies. Fighting ISIS is no longer their priority—survival is, and they know it’s impossible for them to repel Turkey without U.S. backing, and will accordingly pick their spots in engaging the Turks. To that end, they have already started looking to Moscow to possibly broker any kind of short-term agreement with Assad. Assad is wary of Turkey moving into Syrian territory he wants himself, and Moscow doesn’t want Turkey to be too successful lest it lead to a protracted military confrontation, jeopardizing the peace talks Moscow is busy trying to broker. But any agreement between the Kurds, Assad and Moscow will be short-lived as Assad and Moscow want that territory for Syria in the end, and Kurds still want their own homeland.

The One Major Misconception About it:

That the US has begun its inexorable march out of northeast Syria. There are three situations that could draw the US back into the region. First, if Turkish-Kurdish fighting spins out of control, resulting in significant Kurdish casualties that forces the US to step back in. The second is if there are any US casualties among the remaining forces on the ground in Syria. And third is if the fighting there is drawn out over months and U.S. public opinion comes to match current congressional outrage.

All of which is to say—Erdogan has to tread carefully, but not so carefully that this takes months or years to resolve. It’s a fine needle to thread.

Trump may have been doing this to score a victory with his political base as impeachment looms… but in the process ticked off the one group of people—congressional Republicans—he needs to stay in office. If this move really blows up in his face—if there is an uptick in U.S. casualties or ISIS suddenly resurges—it may be enough to cause some GOP senators to turn on him.

This is the problem with being all short-term tactics and no long-term strategy.

The Syrian Democratic Forces, led by Kurds, called Washington’s move “a stab in the back.” Because what the US really needed right now was another group of heavily armed Middle Easterners steeped in warfare ticked off at them. 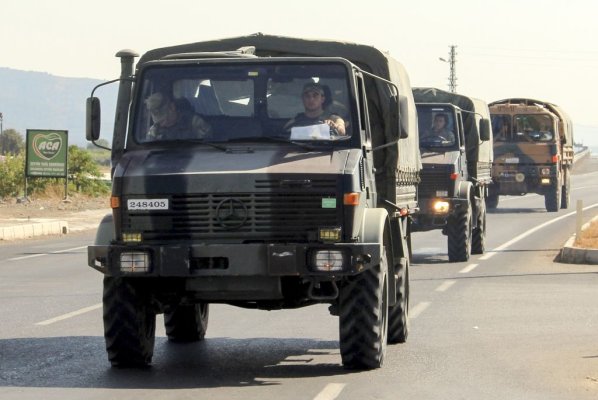