Chile's President on Her Country's Fitful Progress and Future Challenges

Chilean President Michelle Bachelet reviews the honour guard at a welcoming ceremony ahead of the Belt and Road Forum in Beijing, China May 13, 2017.
Jason Lee—Reuters
By Ian Bremmer / Santiago

Chile has long been South America’s good-news story, but the narrative has taken some twists and turns of late. During Michelle Bachelet’s first presidential term, more than a decade ago, when emerging markets were booming, Chile’s GDP rate hit 5%. Then came a devastating earthquake in 2010 just as Sebastián Piñera came to power. Piñera raised taxes to help pay for reconstruction, but global economic conditions soon began to take a toll. Demand for Chile’s commodity exports slowed, and higher taxes and sluggish growth made Piñera unpopular. In Chile, Presidents can’t serve consecutive terms, and Bachelet was again elected President in 2013 on pledges of free higher education, steeper business taxes and tighter regulation. Government for the people, not for the bankers and corporations, she promised. But keeping those promises became impossible as export prices continued to fall. Growth is now below 2%. Inbound investment is down. Jobs are scarce. Bachelet’s current term ends in March 2018.

When we met recently, I asked her, Where does Chile go from here? “We can’t grow along the same path,” she said. As Chile gets closer to the income levels of developed countries after decades of high growth, she explained, “people empowered by positive change are demanding quick solutions to problems. How do we build an intelligent plan for growth over decades, while responding to citizens’ immediate demands for less inequality and more opportunity? We must do both.”

One way may be through global trade, even as skepticism about globalization grows. Bachelet supports Chile’s membership in the Trans-Pacific Partnership (TPP), the multinational trade deal that became a political football in last year’s U.S. presidential election. President Trump has withdrawn the U.S. from the pact, but Chile backs the efforts of Japanese Prime Minister Shinzo Abe and others to press on with TPP.

I asked Bachelet if Trump has made Chile’s relations with the U.S. more challenging. The relationship is “very strong,” she assured me. “Our bilateral agenda covers trade, investment, energy, education, innovation and security.” She also reminded me that Chile is the only Latin American country that participates in the U.S. visa-waiver program–and that the U.S. has a trade surplus with Chile, a point Trump will appreciate amid squabbles with Mexico and Germany over the balance of trade.

Trump and Bachelet have one tough issue in common: immigration. Some of the people fleeing the upheavals in neighboring Venezuela have made their way to Chile. I asked Bachelet if Chile needs to tighten its immigration policy. “Chile is a country of migration,” she said, pointing out that many of the immigrants coming from Venezuela are young and well-educated. But she acknowledged that her government is “developing a new migration policy,” one that will grant not just rights but “obligations” to immigrants.

This election year hasn’t yet persuaded Chile to turn its back on trade or migrants, but voters need to see the good news in globalization if the embrace is to continue.

Correction: The original version of this story misstated when Michele Bachelet’s current term ends. It ends in March of 2018, not November of 2017. 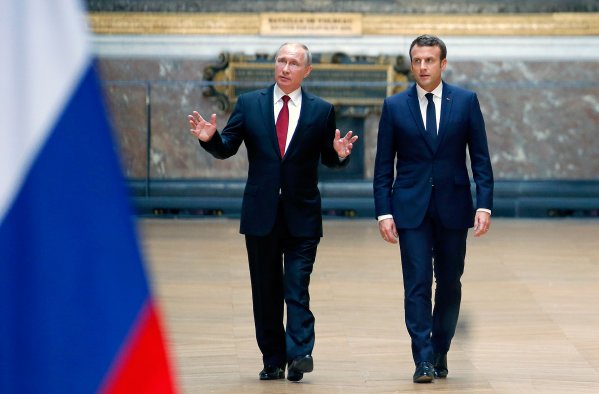 The World Won't Ignore Chechnya's Purge of Gay Men
Next Up: Editor's Pick