Our world has never witnessed a time of greater promise for improving human health. Many of today’s health advances have stemmed from a long arc of discovery that begins with strong, steady support for basic science. In large part because of fundamental research funded by the National Institutes of Health (NIH), which traces its roots to 1887, Americans are living longer, healthier lives. Life expectancy for a baby born in the U.S. has risen from 47 years in 1900 to more than 78 years today. Among the advances that have helped to make this possible are a 70% decline in the U.S. death rate from cardiovascular disease over the past 50 years, and a drop of more than 1% annually in the cancer death rate over the past couple of decades. As one more dramatic example, thanks to remarkable advances in antiretroviral drugs, most Americans with human immunodeficiency virus (HIV) can now look forward to an almost normal life span.

Yet, despite this astounding progress, much more remains to be done. Among the many efforts now poised to change the future of health are those to harness the power of gene editing, expand the reach of cancer immunotherapy, map the human brain and build a solid foundation for a more individualized approach to health care, often called precision medicine. And along with the bright promise of preventing, treating and curing some of humankind’s most feared diseases come some crucial questions about how to ensure such breakthroughs are applied both ethically and equitably.

One of the great things about basic science is that it is impossible to predict where it might lead. For example, no one could have imagined that relatively routine efforts to sequence bacterial genomes and to improve yogurt production would lead to development of a revolutionary new gene-editing tool. But it did! In the late 1980s, scientists found strange repetitive DNA sequences called Clustered Regularly Interspaced Short Palindromic Repeats (CRISPR) in bacteria, and a couple of decades later, other researchers discovered that the CRISPR system helped yogurt’s beneficial bacteria fend off viral invaders, by detecting and snipping their DNA. After CRISPR’s exact mechanism was figured out, this exquisitely precise gene-editing technology was quickly put to work in a wide range of biomedical settings.

Researchers think CRISPR and related gene-editing technologies hold tremendous potential for treating or even curing the thousands of diseases for which we understand the molecular mechanism but treatments are limited or unavailable, such as sickle-cell disease, muscular dystrophy, Huntington’s disease and a long list of others. All of these exciting treatment opportunities involve editing the DNA of specific cells that can help the intended patient but are not passed on to future generations. Here is where gene-editing technology encounters a critically important ethical boundary. NIH and virtually all credible international bodies remain opposed to clinical applications of heritable gene editing, which involve using gene editing on human embryos, sperm or eggs. These interventions are difficult to justify medically and would irreversibly alter the DNA blueprint of future generations of humankind.

Another rapidly emerging field, cancer immunotherapy, is also the fruit of decades of basic research. In fact, one fascinating study showed that a successful immunotherapy approach, called checkpoint inhibitors, arose from a century of cumulative work by more than 7,000 researchers, including 2018 Nobel laureates James Allison and Dr. Tasuku Honjo. Other pioneers in the effort to enlist a patient’s own immune system in the fight against cancer include Dr. Carl June and Dr. Steven Rosenberg, who are now looking to extend and fine-tune their cell-based strategies so they benefit more people with many more types of cancer.

While cancer immunotherapy is still in its infancy, some impressive reports of its ability to save lives are beginning to roll in. For example, new survival data from one of the longest-running immunotherapy trials—a combination approach using checkpoint inhibitors for metastatic melanoma—showed that 52% of patients were still alive after five years. Before the advent of immunotherapy, the five-year survival rate for this deadly form of skin cancer was only about 5%.

Perhaps no basic science endeavor has a more ambitious goal than the NIH-led Brain Research Through Advancing Innovative Neurotechnologies (BRAIN) Initiative: developing the tools needed to understand how the human brain’s roughly 100 billion cells, each with about 1,000 connections, interact in real time. As a result, we will have a much better grasp of how the brain works to produce our motor activities, memory deposition and retrieval, cognition, emotions and behaviors.

Brain diseases still pose some of the greatest mysteries in modern medicine. So the aim of the upwards of 500 investigators at more than 100 institutions supported by the BRAIN Initiative is to spur progress in neuroscience, much as the international Human Genome Project did for genetic research. Such understanding will open new avenues to treat Alzheimer’s disease, autism, depression, epilepsy, Parkinson’s disease, schizophrenia, stroke, traumatic brain injury and many other neurological disorders.

Basic science also plays an important role in prevention. Currently, most recommendations about how to prevent disease are based on the expected response of the average person. Precision medicine is an innovative approach to the diagnosis, management and prevention of disease that takes into account individual differences in genes, environments and lifestyles.

To realize the full potential of precision medicine, the NIH launched the All of Us Research Program in May 2018 to build a diverse research cohort of 1 million or more volunteers from across the U.S. Among other things, All of Us will aim to do for all diseases what the Framingham Heart Study has done for the prevention of cardiovascular disease. Begun in 1948, the Framingham study initially enrolled more than 5,000 residents of this small Massachusetts town and, over time, their children and grandchildren, eventually reaching 15,000 volunteers. Because of them, we now know much more about high blood pressure, high cholesterol, smoking and other modifiable risk factors for cardiovascular disease—-knowledge that has helped to save millions of lives.

Until recently, most studies and clinical trials have been conducted with participants largely of ancestral European origin. As a result, there are many new drugs being developed to treat cancers and other serious diseases—but often their effectiveness has not been established in African Americans or other racial and ethnic groups because they were not included in research studies. That needs to change.

To make sure that people of all backgrounds benefit from advances in precision medicine, All of Us has made it a priority to enroll volunteers from groups that are traditionally under-represented in medical research, including African-American, Hispanic and Latino, American Indian, lower-income and rural communities. So far the results have been encouraging. More than half of the nearly 210,000 people fully enrolled to date are racial or ethnic minorities, and nearly 80% are from groups under-represented in medical research.

We will apply the latest methods and approaches in data science to merge, integrate and analyze information from a wide variety of sources—biological, environmental, socio-economic and geospatial. By combining data into one large resource, with proper security and privacy safeguards, the process of conducting research will become easier, faster and ultimately less expensive.

All of Us is just one of many innovative steps that biomedical research is taking to build the next generation of resources that will help to tackle many of the complex and difficult issues facing health care today. What we learn using these transformative tools and technologies may help reduce costs by shortening the translational timeline from scientific discovery to real-world therapies, as well as provide valuable new insights into how to set about addressing socioeconomic disparities in health status both here and abroad.

Such insights can then be used to ensure that people from all walks of life, all around the world, will be healthier than ever. And is that not the aim of all biomedical research, be it basic, translational or clinical? We look forward to the time when the long arc of scientific discovery finally makes it possible to vanquish many of the chronic diseases that devastate far too many lives today. □ 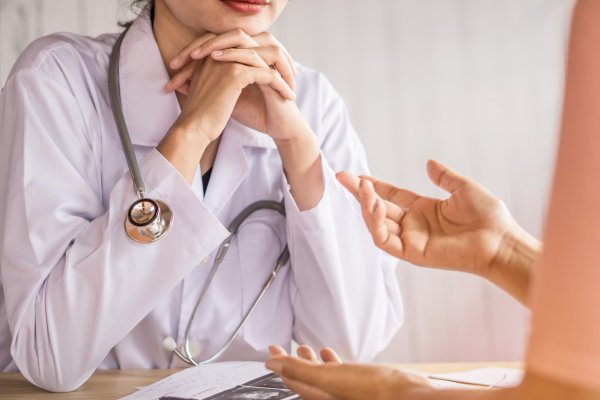 How the Ban on Medical Advertising Hurt Women Doctors
Next Up: Editor's Pick