Some people love Halloween—others less so. A recent viral video shows what can happen when one person in a family goes all in on the spooky holiday, despite what the rest of the family may think.

Sabrina Zimmerman posted a video to Facebook, where she is driving through her Indiana neighborhood when she suddenly spots Halloween serial killer Michael Myers nonchalantly cruising down the street on her bike with a child trailer attached and a baby skeleton riding inside. Instead of fleeing in horror, Zimmerman pulls up alongside the “murderous” costume man and demands, “What the hell are you doing?” The masked man says nothing, as she asks him, “Are we these people now?” As the Halloween theme plays, the man just stares at her as she continues to berate him.

It quickly becomes clear that Zimmerman believes this ersatz Michael Myers is her husband, Evan Zimmerman, and she is absolutely mortified by the fact that he has apparently been overcome by the Halloween spirit. While it’s unclear whether he was dumbstruck at being busted by his wife while clowning around or just staying in character, the man said nothing while his wife gave the verbal equivalent of rolling her eyes at him. He just stares blankly at her through the mask, while she warns him, “Seriously, get home or I’m going to have you committed.”

She then drives off leaving the man to his Halloween shenanigans, while telling her son that she just left his father alone for a few minutes and this is what he got up to.

Zimmerman shared the video on Facebook where it quickly racked up views and gained a lot of fans.

As the video spread, the so-called Michael Myers of Decatur got his own Facebook page, where he shares more of his Halloween fun, and the Zimmermans were interviewed by local radio station The Bear 98.9, where Sabrina Zimmerman explained that her husband will rake the leaves and roam the streets dressed like the killer. While her neighbors have gotten used to the sight, if not fully accepting the unsettling behavior.

The video then spread to Twitter. There people tried to determine what the scene would be like when the man got home, whether this was a good a Halloween prank or not, some decided this was #RelationshipGoals, and others wondered whether this really was her husband or, in a spooky twist, if it really was a serial killer who just got scolded by someone else’s wife. 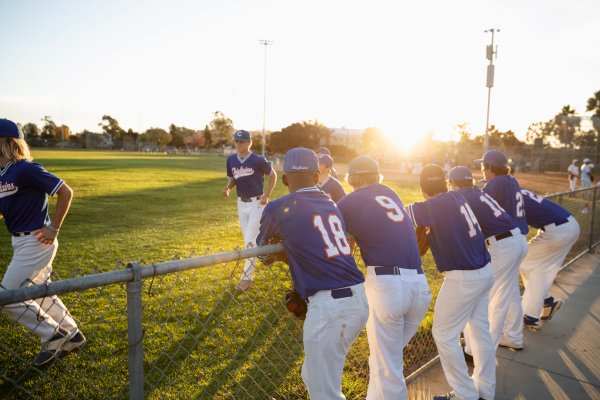 Man in Forrest Gump Costume Who Just Keeps Running Off of a Baseball Field Knocks It Out of the Park
Next Up: Editor's Pick