HBO's Watchmen Is the Smartest Superhero Story Since Black Panther

Regardless of whether you’ve read the cult-classic comic it’s based on, HBO’s Watchmen is bound to confuse you. If you’re new to this world, created by writer Alan Moore and artist Dave Gibbons in a 1986 series published by DC Comics, references to a spectral agent of chaos named Rorschach—not to mention a strange, seemingly disconnected subplot set at a remote country estate—will soar over your head. Longtime fans might be caught off-guard by a new lead character, Regina King’s masked police detective Angela Abar (a.k.a. Sister Night), or a story that takes place in present-day Tulsa rather than ’80s New York and ruminates on white supremacy more than nuclear proliferation. But they may well have some insights into an unexplained scene from the series premiere in which small, slimy, squid-like creatures suddenly rain down from the heavens.

These details may sound off-putting to some—especially those who’d prefer to keep their superhero entertainments and their depressing 24/7 news feeds separate. Frankly, it’s tough to summarize the plot of Lost and The Leftovers creator Damon Lindelof’s updated Watchmen without making it sound like a try-hard mess. But if individual scenes and threads can be inscrutable, the series as a whole is fast-paced, thematically ambitious and impeccably constructed from the jump. With comic adaptations that feel more churned out than crafted dominating the screen—and after a widely loathed 2009 Watchmen movie—I’m surprised and delighted that Lindelof has made the smartest superhero adaptation since Black Panther.

Within the first third of the show’s nine-episode debut season, which premieres Oct. 20, a central narrative takes shape: In an alternate 2019 America, about three decades into the presidency of Robert Redford, a white nationalist terrorist group called the Seventh Cavalry has reared its hooded head. Irate that the Hollywood-liberal perma-leader awarded reparations to black Americans, among other grievances, the extremists carried out a coordinated slaughter of law enforcement. In the course of investigating a colleague’s murder, Angela—a costumed crusader, wife and mother played with tough tenderness by King—gets drawn into a conflict much older than she is. The question of who she can trust, in a landscape where police, Cavalry and vigilantes of all affiliations don masks to protect their own safety and anonymity, grows more complicated with each episode.

It’s her confusion, and that of other apparent “good guys” like Looking Glass (the perpetually underused Tim Blake Nelson, in what may turn out to be his meatiest non-Coen Brothers role), that the show replicates in the viewer. Like the comic, it moves fluidly between the present and the past, combining straightforward flashbacks with chemically induced journeys into other places and times; it isn’t always clear where or when a scene is taking place. Characters and events, newly invented and original alike, are referenced or glimpsed before they’ve been properly introduced. A show-within-the-show cleverly titled American Hero Story reenacts the events of Moore and Gibbons’ book—which prominently featured a comic-within-the-comic, among other fictional primary-source documents. But its melodrama distorts what is, in Watchmen‘s 2019, canonical history. It’s all very meta, yet in a way that avoids simply flattering comic buffs with in-jokes at the expense of newcomers.

Lindelof has said that he “was trying to replicate the feeling that I had when I read the original Watchmen when I was 13, which was not dissimilar from being dropped on my head. I didn’t know what I was supposed to know versus what I wasn’t supposed to know.” As in the original story, that confusion serves a profound thematic purpose. If the show presents the Cavalry as the villains and Angela as a would-be hero, just about everyone else is scattered across the spectrum of a vast moral gray area. Unlike King’s character, the white people we meet in Tulsa have a complicated relationship with a hate group that effectively reinforces their privilege, even if they find its actions and beliefs reprehensible. This is what separates this show (in the six episodes sent for review) from intentionally baffling sci-fi or superhero series like Westworld, Legion and eventually even Lost, which too often allow overcomplicated, misdirecting plots to stand in for challenging ideas about how regular people live now.

In Watchmen, as in real life, white skin functions as a mask unto itself—a way of blending into spaces that would be dangerous for minorities, regardless of your motive for being there. It is thus a constant source of anxiety for people of color whom progressive-seeming whites could easily betray with few consequences. The stakes of such racial inequality are laid bare from the opening scenes of the series, a wrenching vignette that follows a scared little boy through the Tulsa race massacre, a horrifying, real 1921 attack—one that gets too little space in history books—in which whites killed or injured hundreds of black residents and decimated the city’s prosperous Greenwood neighborhood (a.k.a. “Black Wall Street”). Integral to the show’s deconstruction of white supremacy is a poignant rendering, through King’s breathtaking performance and in the conventions of Lindelof’s surreal America, of the cumulative effect of 400 years of inherited trauma on black Americans in the present.

Where do superheroes fit into all of this? Like the original Watchmen, as well as Amazon’s recent meta-superhero show The Boys and countless revisionist comics, HBO’s version reminds us that a costumed enforcer is only as good as the person behind their mask. And in a bitterly divided society that comes together to throw heaps of money at DC and Marvel, goodness can be relative; one person’s savior is sure to be another’s militant reactionary. (The parallels to police and politicians, both ambiguous forces on the show, aren’t tough to discern.) Why else would we spend so much time arguing over the political alignments of 80-year-old fantasy characters created for the entertainment of children? A lavish, transfixing epic, a potent but rarely heavy-handed metaphor for race relations in America and a showcase for one of the greatest actors of her generation, Lindelof’s Watchmen is also a shrewd encapsulation of the perils that might await a society obsessed with superheroes. 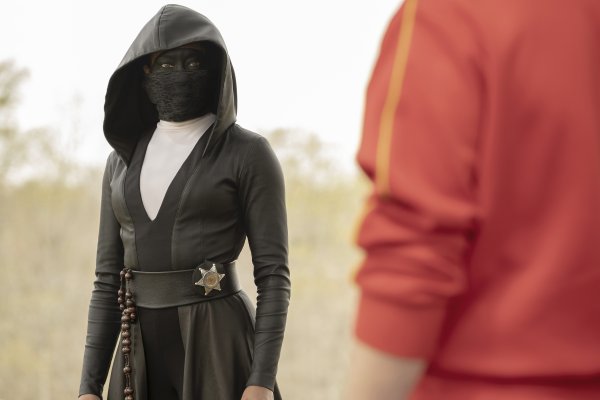 Everything You Need to Know About the Watchmen Graphic Novel Before You Watch the Show
Next Up: Editor's Pick