It sounds like a scene straight from a Hollywood horror film, but when an Iowa homeowner found his basement filled with blood, it was all too real.

Nick Lestina headed down to the basement of his house in Bagley, Iowa, only to be greeted with a nightmare scenario of nearly five inches of blood, fat, and bones covering the floor. It wasn’t an Iowa-based reboot of Amityville Horror or an attempt to recreate the blood tide from The Shining or even a Halloween prank gone wrong. After Lestina surveyed the horrifying scene, he realized that it all had to do with choosing the wrong neighbor.

Lestina didn’t live next door to a serial killer, dispatching his victims in some gruesome manner, but a meat locker draining its bloody leftovers. According to The Des Moines Register, Lestina and his family of seven had peacefully lived next to a business called Dahl’s Custom Meat Locker for ten years. They had never had any problems until the literal blood bath that filled Lestina’s basement, which he believes was the result of his neighbors dumping the remains of pigs and cows down a floor drain which is connected to his pipes.

KTIV News Four shared a photo of the bloody mess on social media:

After discovering the gore-filled horror show, some may have called a priest or opened a Halloween haunted house, but instead Lestina immediately reported it to the Iowa Department of Natural Resources. They, in turn, called the Iowa Department of Health because blood and bones can be hazardous, especially with children in the house.

Turns out that the meat locker’s drainage system had backed up during a slaughter, which caused the blood and gore to pour into the home’s basement. Two weeks later, the blood is still seeping into the basement and the family has had to leave their home. Lestina is working with officials, his insurance company, as well as the meat locker and its insurance company to clean up the horrifying scene.

Dahl’s Custom Meat Locker did not immediately respond to TIME’s request for comment, but co-owner Kaitlin Dahl told WHO-TV, “We’re taking responsibility for it. It wasn’t our fault, we didn’t intentionally put the blood down there. We didn’t want this to happen. We feel for them. I’d be just as mad as they are, in their shoes.” The company also told The Des Moines Register that they always planned to help cover the family’s cleanup costs.

If there is a lesson to be learned, it’s this: don’t build your house on an old cemetery and don’t live next door to a meat locker. 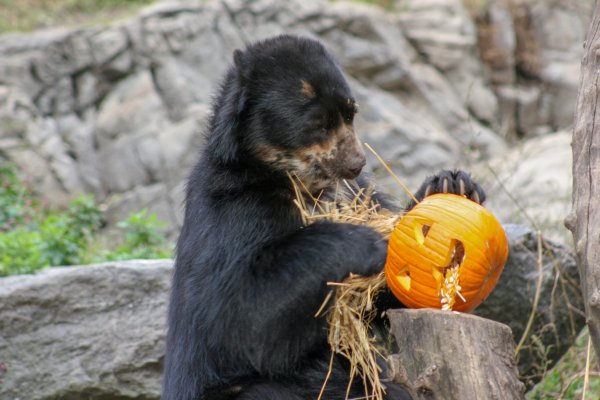 Halloween Prankster Bear Saunters Up to House to Steal Pumpkin and No Festive Gourd Is Safe. Intentions Are Unclear.
Next Up: Editor's Pick