After millions of people in California were left in the dark last week when Pacific Gas & Electric, the giant utility company that provides service to much of the state, preventatively shut off power to avoid possible wildfires, the conversation quickly turned political. Democrats described PG&E’s actions as the result of rampant corporate greed that, they argued, kept the company from preparing for extreme weather associated with climate change.

“Californians should not pay the price for decades of PG&E’s greed and neglect,” said California Gov. Gavin Newsom on Twitter. “PG&E must be held to account.”

Public officials’ rush to condemn C-suite decisions was the latest sign of how intertwined conversations around corporate influence and climate change have become — and how climate activists have adopted populist language in recent years. Across the country, activists are arguing that the U.S. has failed to address climate change largely because politicians have been enthrall to greedy corporations, particularly in the energy industry, that have put their bottom line ahead of human health and wellbeing.

The preemptive power outage in California is undoubtedly foremost a climate change story. PG&E turned off power because the company feared high winds might push transmission lines into contact with trees that could easily catch fire. It’s a likely scenario given that much of California’s forest land has all but turned into firewood thanks to high temperatures and a persistent drought earlier this decade. But the conversation around PG&E also reflects a larger populist conversation about corporate accountability that Democrats have been having on the national level.

Fossil fuel companies have received the brunt of the criticism. All of the major contenders for the Democratic presidential nomination have signed a pledge committing not to accept donations greater than $200 from executives and lobbyists in the oil, gas and coal industries. Candidates have also touted their own work fighting the energy giants when addressing climate change on the campaign trail, often arguing that the history of the oil and gas industry misrepresenting the science of climate change makes them societal pariahs.

“The first thing we’ve got to do is we’ve got to attack this corruption head on in Washington,” Massachusetts Senator Elizabeth Warren said at a town hall last month. “Enough of having the oil industry, the fossil fuel industry write all our laws in this area.”

Though PG&E is a utility company with different interests from oil, gas or coal companies, much of the criticism from local Democrats about the utility has used similar language. In conversations with TIME, Democrats in counties affected by the power outages expressed resentment toward the company, which they described as choosing to prioritize its own profits over the public good.

“People were quite appalled by the way this power outage thing has taken place,” said Pamela Service, who lives in Eureka. “Feeling like PG&E has been lining its pockets and the pockets of its investors and so on at the expense of trying to keep the infrastructure repaired, and now they’re making the people suffer for it.”

PG&E, a San Francisco-based company, provides power to almost 16 million people in California. Thirty five counties were affected by the power outages, and PG&E reported 738,000 customers were without power, which translated to 2.1 million people.

PG&E has a long and rancorous history with Californians, but last year its problems were compounded when state investigators found the company responsible for a dozen fires that caused billions in damage in 2017. The company is also now being held responsible for a subsequent fire, in November 2018, that destroyed 90 percent of the town of Paradise and resulted in 85 people’s deaths, making it the deadliest wildfire on record in California’s history.

The costs of those fires — measuring in the tens of billions — led the company to declare bankruptcy earlier this year and is behind the aggressive approach the company has taken to shutting off power rather than risk the possibility of a wildfire. “We made that decision to keep customers and communities safe,” said PG&E CEO Bill Johnson in an Oct. 14 statement. “That was the right decision.”

In a release, PG&E said it had found more than 100 instances of damage to transmission lines during inspections, any one of which the company said could have resulted in ignition.

Californians say they understand the root of the dilemma. Peter Minett, chair of Nevada County Democrats, pointed to a demonstration on Wednesday against the shutdown, but noted that “other people that felt like they’d much rather have a couple of days of inconvenience than a massive wildfire.”

But much in the same way that climate activists and national Democratic politicians have rejected the fossil fuel industry, Californians have gladly placed blame on the utility. Coco Raner-Walter, chair of Santa Cruz County Democrats, likened PG&E to the banks and the auto industry, both of which received government assistance during the 2008 recession. “This theme kind of goes around and around and around and around,” she told TIME, suggesting that corporations across a variety of industries have caused wreaked havoc while leaving taxpayers in a lurch.

Presidential candidates for the most part did not comment on PG&E’s outages. But Vermont Senator Bernie Sanders, who has made the elimination of corporate influence and climate change central to his campaign, was the one notable exception.

“Corporate greed is now causing Californians across the state to sit for days without power,” he said in a statement on Oct. 11. “The crisis in California proves exactly why we must immediately pass the Green New Deal.”

Write to Justin Worland at justin.worland@time.com and Lissandra Villa at lissandra.villa@time.com. 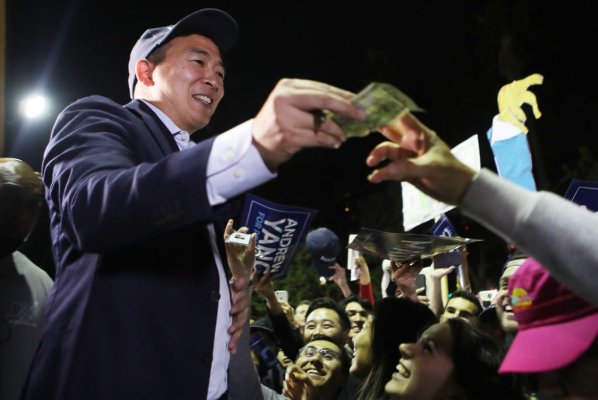