California Wildfires Are Causing Billions in Damage. Who Will Pay?

In the past few decades, wildfire season in California has expanded from a few months each year to a year-long phenomenon. This summer’s Carr and Mendocino Complex fires — which together have burned more than 400,000 acres of land in Northern California — follow a string of smaller but still disastrous blazes earlier this year and last.

From a scientific perspective, this new reality is made much more likely by climate change, which raises temperatures and makes drought more persistent. But climate policy experts say the law hasn’t caught up when it comes to people, businesses and communities on the ground who need to recoup the billions in damage caused by the fire.

In California, government investigators say the local electric utility Pacific Gas & Electric is responsible for 12 fires that caused billions in damage late last year because the fires were sparked by power lines, in most cases, coming into contact with trees. The utility points to climate change as the true culprit: the warming planet created conditions that makes such fires all but inevitable.

“This is about more than PG&E. And it’s about more than one bad fire season,” said PG&E CEO Geisha Williams in May. “Climate change makes wildfires and other extreme weather events more likely.”

The situation in California offers a window into an increasingly relevant legal question as the signals of climate change appear more frequently: who should bear the responsibility when climate disaster strikes? It’s a question that climate change activists have floated in courthouses, negotiating rooms and legislative halls across the globe in recent years, but the answer is still yet to be determined.

The wildfires and other extreme weather events across the globe have made the question an immediate concern. In May, the state’s Department of Forestry and Fire Protection determined that 12 devastating fires that struck Northern California late last year were the result of trees coming into contact with power lines or other failures by PG&E. Thanks to a policy known as inverse condemnation the utility will be on the hook for those damages, which the company says could easily surpass $10 billion, even if the company is not found to be negligent.

In the past, PG&E has paid the bills when the company was blamed for fires and other damages. But the company now says it cannot continue to foot the bill so long as climate change continues to increase the likelihood of fires. Millions of trees have died across California after years of intense drought, creating vast quantities of fuel that allow fires to burn faster and over greater distances. Combine that with higher temperatures and there’s a recipe for disaster — one that the company argues will be difficult to keep up with despite its best efforts.

The problem is only going to get worse with time. A May report from the state described climate change as a “real, immediate, and growing threat to California’s future” and highlighted the link between rising temperatures and wildfires. “Fire season used to be a five, six-month proposition,” says Kurt Henke, former Sacramento fire chief who now heads AP Triton, a fire consulting firm. “It’s now year round due to drought and the fact that climate is changing.”

To keep utility companies out of bankruptcy, which utilities in California said they could face without a rule change, officials are pushing a change in the law. Late last month, Gov. Jerry Brown proposed a new plan that would allow a court to decide whether the utility acted “reasonably” before forcing the company to pay claims. “Costly wildfires and natural disasters have the potential to undermine the system,” Brown told legislators, “leaving our energy sector in a state of weakness at a time when it should be making even greater investments in safety.”

PG&E has also pushed to raise electricity rates to pay for damage rather than collecting from shareholders and risking their bankruptcy. That would allow the companies to continue normal operations without bankruptcy, which would lead to higher electricity prices in the state.

The debate over liability is nothing new. As early as 1991, a group of small developing countries facing devastation as a result of sea level rise and flooding called on rich countries to pay for “loss and damage.” That topic has been a sticking point in recent climate change negotiations, with developing countries arguing that the countries that have emitted the most greenhouse gases — namely, the U.S. and other developed countries — should pay the cost of damages. Discussions on that topic remain ongoing as a significant rift remains even among governments committed to addressing global warming.

Within the U.S., that debate has taken several different forms. Proactive policymakers have pushed to rework the National Flood Insurance Program, which pays people to rebuild their homes after floods even in areas where climate-related damage is likely to strike again. That program, which is $25 billion in debt, puts the burden of climate change-related natural disasters in the hands of the federal government and the taxpayer by extension. Infrastructure experts have also pushed the federal government, without much positive reception, to rethink its disaster assistance dollars to incorporate climate change preparedness.

A group of pioneering cities and states have sought to address the question of who pays the costs of climate change differently, pushing the oil and gas industry to pay for climate-related damages. A series of lawsuits across the country have blamed the companies for years of polluting the planet while concealing evidence that emissions would contribute to devastating climate change. The authorities behind the lawsuits, brought by officials everywhere from San Francisco to New York state, hope that courts will force the industry to pay up to cover the costs of damage and adaptation.

“Because of climate change we are incurring costs, whether it’s the decision to raise a sea wall or installing air conditioning in schools,” says Judith Enck, a former EPA regional administrator now an adviser at the Institute for Governance and Sustainable Development. “We’re looking for them to pay their fair share.”

But courts have thus far expressed skepticism — not necessarily at the fault of oil and gas companies, but at the ability of the judicial system to deal with it. “The problem deserves a solution on a more vast scale than can be supplied by a district judge or jury in a public nuisance case,” wrote William Alsup of the U.S. District Court in Northern California as he dismissed a suit from the cities of San Francisco and Oakland.

That may be. But as the situation in California shows, figuring out who pays for the devastation brought by climate change could not happen fast enough. 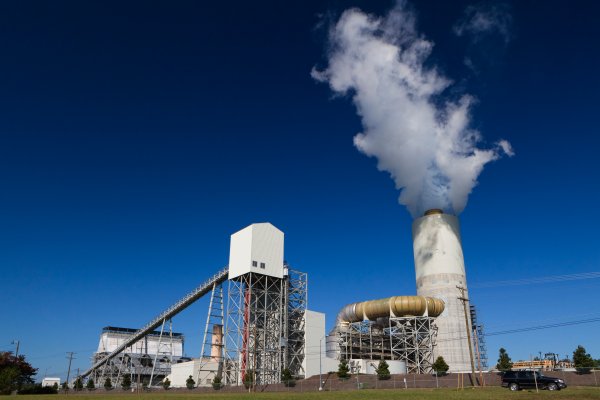 Why Some Republicans are Rethinking Climate Change
Next Up: Editor's Pick