Fate conspired in the favor of this dog-loving Good Samaritan: after fostering a puppy and returning it to the shelter last year, Kentucky-based journalist Kate Howard was reunited with sweet dog Winnie by a chance circumstance and her own intuition.

As Howard shared in a series of now-viral tweets, she was spending a day off from work after attending a memorial service, sitting on her porch and “enjoying the sunshine,” when a woman and dog happened to stop at her yard, with the dog seeming to want to linger in her particular patch. “All dogs are perfect but she was particularly charming,” Howard noted, appropriately.

But when the owner called her by her distinctive name — Winnie — it gave Howard pause. That was the same name she had bestowed upon a foster puppy last year, one she had felt particularly attached to. The name Winnie was a suggestion from Howard’s mom, thanks to Howard’s love for Winnie the Pooh as a child, she explained to TIME.

And it quickly became clear that it wasn’t just a naming coincidence. In fact, this was the same exact dog Howard had fostered. Even though she had only recently moved into the new house in her new neighborhood, some force was at play to reunite the pair again. “She was a really sweet, perfect puppy who I would have been extremely tempted to foster-fail and keep if I had a yard when I fostered her,” Howard told TIME. “But I was in an apartment and she was too rowdy for old Foxy.” (Foxy is Howard’s “permanent pup” who she’s owned for 13 years.)

To top it all off, Winnie’s owner agreed to come by in future.

The story is sweet — and it’s tugged many heartstrings online, which Howard can appreciate.

“Dogs (and cats, for that matter) can be the most comforting presence. They know when you’re sad or sick and they really help. So that added an extra layer to the beauty of her showing up on my lawn,” Howard said. “I didn’t even know I needed her and there she was.” 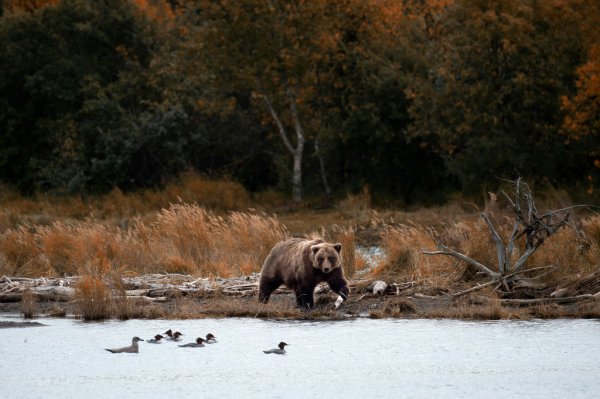 Holly Is This Year’s Beautiful Fat Bear Week Winner Who Swept the Whole Competition
Next Up: Editor's Pick