3 People Confirmed Dead and 100,000 Residents Evacuated in Los Angeles. The Latest on the Wildfires Raging Across California

By Gina Martinez and Madeleine Carlisle

Three people have died and 100,000 residents have been displaced as a result of wildfires spreading across California. One person died in Saddleridge Fire in the Los Angeles area. Two more people, including an 89-year-old woman, died as a result of the Sandalwood Fire in the Calimesa area.

The Los Angeles Fire Department has lifted all evacuation orders for the Saddleridge fire as emergency responders have begun to tame the blaze. Two of the fires, the Reche Fire in Moreno Valley and the Wolf Fire in Riverside County, have been fully contained.

In 2017 and 2018, California experienced the deadliest and most destructive wildfires in its history, fueled by drought, an unprecedented buildup of dry vegetation and extreme winds, according to the California Department of Forestry & Fire Protection.

Heres what we know about the wildfires raging across California:

How many wildfires are currently burning?

Cal Fire currently lists eight active wildfires in California. While some wildfires — including the Wendy Fire and Wolf Fire — have caused little damage, authorities have still warned residents to stay alert and in some instances suggested evacuations.

The biggest wildfires include Saddleridge Fire in Los Angeles, which as of Sunday morning has consumed 7,965 acres and is 41% contained.

A Los Angeles Fire Department spokeswoman confirmed to TIME that a man who was treated for cardiac arrest and transported to the hospital by emergency officials died. The blaze also injured three first responders and destroyed 21 buildings.

The Saddleridge Fire had also shut down the 210 freeway in both directions between the 5 and 118 freeways, according to the California Highway Patrol.

Seventy miles from Los Angeles, the Sandalwood Fire, which started in the city of Calimesa in Riverside County on Thursday afternoon, has burned through 1,011 acres and was 77% contained as of Sunday morning. Cal Fire Peace Officers determined the cause of the fire to be a trash truck that dumped a load of burning trash which then spread into vegetation.

According to Riverside County Sheriff’s Office, at least two people have died. Per Cal Fire, the Sandalwood Fire has damaged 16 structures and destroyed 74.

The Reche Fire, also in Riverside County, is now fully contained after burning through 350 acres since Thursday afternoon. The cause of the fire is still under investigation.

The Briceburg Fire in Mariposa County has been active for five days. It has burned through 5,563 acres and 63% contained as of Saturday afternoon. Only one structure has been listed as being destroyed and 1,418 fire personnel are assigned to tackle the blaze, Cal Fire said.

The Los Angeles Fire Department has lifted a mandatory evacuation of an estimated 12,700 homes in the L.A neighborhood of Porter Ranch and nearby O’Melveny Park. Parks in the vicinity of the fire, including O’Melveny Park, remain closed.

As of Saturday afternoon, the areas of west Mason Avenue and southwest of Corbin Avenue are able to be repopulated. Additional neighborhoods can also be repopulated, which are listed in green on LAPD’s color coded map.

Meanwhile, Cal Fire officials have issued mandatory evacuation orders for the Sandalwood Fire, also in Riverside County. Officials are ordering the evacuation of residents along the County Line Road and San Bernardino Freeway. The Riverside County Emergency Management Department is transporting evacuees from the Calimesa Senior Center to Mesa Grande Academy by the City of Calimesa. Evacuation orders have been lifted north of Villa Calimesa Mobile Home Park.

Where there are power outages

In an attempt to prevent the spread of wildfires, which can ignite along active power lines, California utility companies announced early last week that they planned to shut power off for thousands of residents. As of Friday, thousands have gotten their power back, but some still remained without power, according to the Los Angeles Times.

Utility company Pacific Gas and Electric (PG&E) announced earlier this week it was shutting off power for hundreds of thousands of customers as a “precautionary measure to reduce wildfire risk during the forecasted severe wind event.” As of Saturday, power had been restored to everyone effected by the shutoff.

The San Fransisco Chronicle has posted a power outage map that helps residents track shut off zones and where wildfire risk zones are.

Write to Gina Martinez at gina.martinez@time.com and Madeleine Carlisle at madeleine.carlisle@time.com. 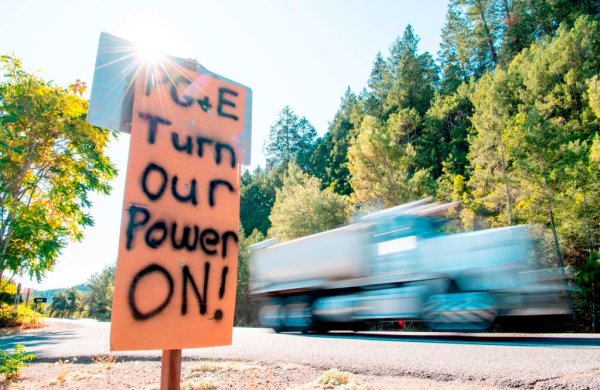