Less than a year after the Camp Fire became the deadliest blaze in state history, California is once against facing a spate of wildfires that threaten its residents and land.

There have been nearly 240 wildfires in California over the past week, causing one evacuation and two power shut-offs while fire fighters and utility companies attempt to prevent another catastrophe. Since the start of the year, 1,349 wildfires in the state have burned 12,247 acres of land, according to California Department of Forestry and Fire Protection, also known as CalFire. Of those fires, 178 have been on federal land. There have been 236 new wildfires fires in the past week alone.

Evacuation orders in Yolo County began Saturday afternoon, impacting about 125 people. Residents are now allowed to return home where possible after the Sand Fire burned 2,512 acres and seven non-residential buildings since Saturday, according to CalFire, which declared Sand Fire 60% contained on Tuesday morning.

The number of wildfires so far this year is still less than the amount CalFire saw by this time in 2018. Not including federal land, there were 1,921 wildfires this time last year, burning through 15,220 acres.

“But we did see a lot of new fires last week with weather conditions changing,” says Head. “We are starting to see an increase in the number of fires we’re seeing, and we have had some significant heat in much of the state that have helped to increase the fire activity.”

As of Tuesday morning, Northern California, including parts of San Francisco, Sacramento and further north to Redding, Calif., remained on a fire weather watch.

Now, California is in the middle of a record-breaking heat wave, which Head says is a cause for concern.

“The high heat can definitely influence our fire behavior,” she says. “The good thing is there wasn’t a lot of extreme winds associated with the high heat … but it’s not uncommon for us to see these kinds of weather patterns in California.”

The National Weather Service-Sacramento announced an excessive heat warning to last until Wednesday morning. Temperatures are expected to rise as high as 107 degrees in some parts of Northern California, including Sacramento.

Pacific Gas & Electric (PG&E), which services nearly 16 million people in Northern California, purposely shut down power twice in Northern California over the weekend, after finding weather conditions prime for a wildfire. PG&E is one of several utility companies in California that conduct power outages, known as Public Safety Power Shutoff’s (PSPS), when weather conditions could lead to a wildfire.

PG&E cut power to 21,000 residents in Butte and Yuba Counties between Saturday and Sunday, the first two PSPS’s to take place this year.

PG&E can’t predict how many more shutoffs would take place throughout wildfire season, according to a spokesperson, since shutoffs only take place when weather patterns meet certain criteria such as hot temperatures, humidity levels, dry vegetation and wind speeds. For that reason, PG&E urges California residents to have a plan to get through outages, and encourages their customers to make sure the utility companies have updated their contact information.

Electrical lines belonging to PG&E were found responsible for the Camp Fire that burned through 153,336 acres led to 85 deaths last November, and is considered the most destructive fire in California history.

The original version of this story misstated the number of residents whose power was cut in Yuba and Butte Counties. It was 21,000, not 2,100. 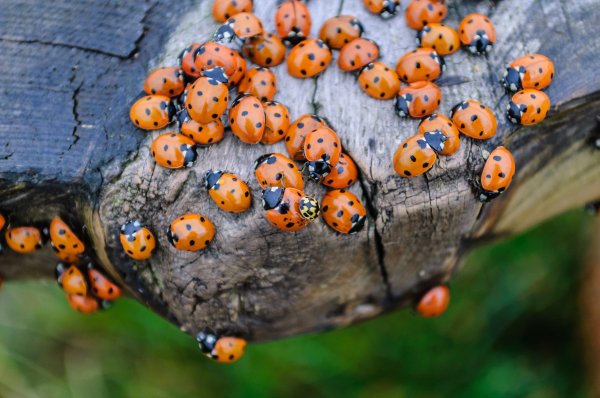 A Ladybug Swarm in California Was Big Enough to Show Up on Weather Radar
Next Up: Editor's Pick