Activists Can't Agree on How to Fight Climate Change. The IMF Says Just Do Something.

Young activists and their supporters rally for action on climate change on September 20, 2019 in New York City.
Drew Angerer—Getty Images
By Justin Worland

Activists, politicians and economists are forever arguing over the best way to address climate change: carbon tax or Green New Deal; both or neither, or a mixture of elements from each. A new International Monetary Fund (IMF) report released Thursday cuts through that noise: any aggressive policy, it says, is better than nothing at all.

“We definitely want action to be taken,” says Paolo Mauro, deputy director of fiscal affairs at the IMF, who oversaw the report. “We’re not religious about any particular type of measure.”

The new report comes as a range of different climate policies are under consideration in the U.S. Proposals for a Green New Deal — an ambitious spending program aimed at eliminating emissions and funding social programs — have garnered the most attention in recent months. All the major Democratic presidential candidates have embraced some form of a Green New Deal, and activists have pushed aggressively for such a program. But proposals for a carbon tax have also been gaining momentum on Capitol Hill. U.S. lawmakers are currently considering drafts for several new carbon tax proposals.

The IMF report does not provide a specific policy prescription. Instead, it assesses a variety of different proposed climate policies, including a carbon tax, an emissions trading system, regulations and a so-called “feebate” system in which polluting is penalized and those who reduce emissions are rewarded. The IMF report concludes that lawmakers must craft rules that work within their own countries’ political context.

Still, while taking an even-keeled look at several policies that would effectively reduce emissions, the IMF report does put a thumb on the scale. It concludes unequivocally that a carbon tax is the most “single, most powerful and efficient tool” to drive a reduction in emissions. It would push polluters to reduce carbon emissions across all facets of the economy—and it’s easier to implement than some alternatives.

One of the benefits of a carbon tax, the report says, is that it’s easier to standardize across borders. More than 70 countries have committed to eliminating their carbon footprint by 2050, but many others — including the biggest emitters, like the U.S. and China — have lagged behind. A carbon tax offers a uniform approach to compare each country’s progress and to form coalitions across borders. “If a country has a straightforward carbon tax,” says Mauro, “it’s a lot easier to compute how much action has been taken.”

For those nations that don’t implement a carbon tax, economists will need to calculate an implicit carbon price, a tricky but doable proposition, report authors say. The IMF found that to keep temperatures from rising more than 2°C above pre-industrial levels by the end of the century, the price on carbon needs to reach $75/ton by 2030.

Authors behind the IMF report argue that activists need not choose between a carbon tax and a Green New Deal-type spending program: a carbon tax can — at least in part — help defray the cost of a Green New Deal. It’s an idea that has caught on in some policy circles, even if it hasn’t risen to the forefront of the climate policy discussion. TIME reported in July that dozens of members of Congress who support Rep. Alexandria Ocasio-Cortez’s Green New Deal resolution also back a carbon tax.

Democratic Rep. Salud Carbajal of California, who supports both the Green New Deal and a carbon tax, echoed the need for action of any kind. “I’m for anything and everything,” he told TIME in July, “that moves the ball forward.”

The report also addresses some of the common critiques leveled against a carbon tax, including that the policy would hit the poor hardest. The report authors emphasize the wide range of potential uses for revenue derived from a carbon tax, from potential tax breaks for low-income people to helping communities whose livelihoods will be damaged by the transition away from fossil fuels.

What’s clear is that the consequences of inaction will be severe. In a landmark report released last year, the UN’s Intergovernmental Panel on Climate Change warned that a rise in temperatures of just 1.5°C could lead to ecological, economic and humanitarian disaster with millions displaced and severe impacts altering human civilization as we know it. The IMF under Christine Lagarde has prioritized the issue citing the costs of inaction. “Many of the things that we are debating, whether it’s sustainability, whether it’s structural reform, whether it’s fighting inequalities,” said Lagarde at event in May, all “will be meaningless if in twenty years time essentially we have wasted the small window of opportunity we have.” 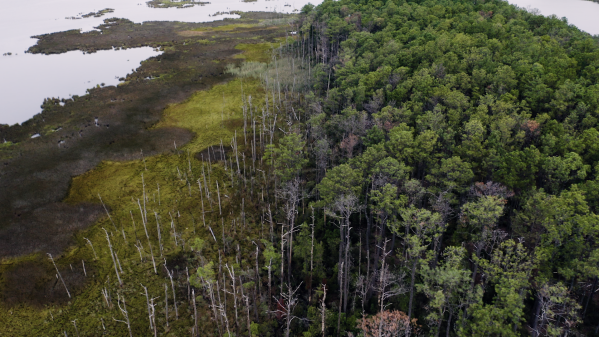 Ghost Forests Are Visceral Examples of Climate Change
Next Up: Editor's Pick