They're in the Empire Business. Aaron Paul and Bryan Cranston Had the Best Time Reuniting at the Breaking Bad Movie Premiere

It’s been six years since Walter White saved his former meth-cooking mentee Jesse Pinkman from enslavement at the hands of Jack Welker’s gang of White Supremacists. Now, thanks to the new Breaking Bad movie, we’re finally going to find out what happened to Jesse after he crashed through the gate of the neo-Nazi compound in that Chevrolet El Camino.

Of course, that also means that fans are being treated to some real-life interactions between Bryan Cranston and Aaron Paul, who played the on-again, off-again partners in showrunner Vince Gilligan’s hit AMC drama. Whether Cranston will appear in El Camino: A Breaking Bad Movie (out Oct. 11) is still up in the air — some fans think he will be one of the “10 familiar characters” who Gilligan has said will return in the movie — but he showed up to support Paul at the film’s world premiere regardless.

After reuniting on the tan carpet outside of Los Angeles’ Regency Village Theatre, Cranston and Paul posed for pictures while laughing and joking with each other, much to the delight of the crowd.

If Gilligan doesn’t give us at least one flashback scene with these two, we may have to riot. 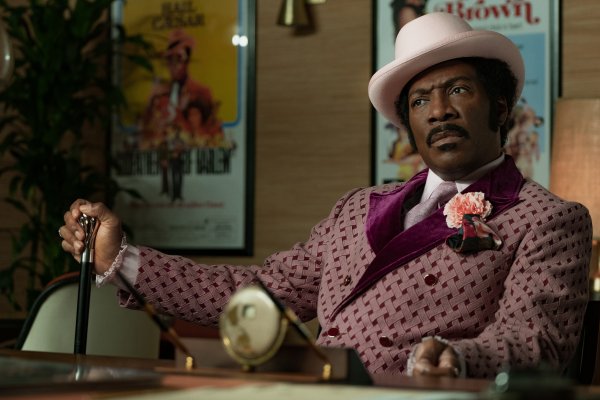 Eddie Murphy Pays Tribute—Gloriously—to a Blaxploitation Legend in Dolemite Is My Name
Next Up: Editor's Pick