Anti-communist crowds marched through Hong Kong Sunday to decry the government’s emergency powers and press their demands for political freedom. Many wore masks in open defiance of a government ban on facial coverings meant as a deterrent to protesters, whose four-month-old democratic rebellion has thrown the semi-autonomous enclave into crisis and caused consternation among China’s top leadership.

Territory-wide SMS alerts from the police force urged the public to “stay alert” and “avoid going out” as protesters assembled from lunchtime in the retail and entertainment district of Causeway Bay. Chanting “Hongkongers resist!” they set off in the direction of the city center and the main government offices. The legislature was evacuated as retailers brought down their shutters. Mainland Chinese businesses were vandalized, and a branch of Starbucks ransacked. Protesters hurled petrol bombs at police, who responded with tear gas and rubber bullets and made scores of arrests. Fires were also lit outside the Sogo department store—a prominent Hong Kong landmark.

Live news streams also showed angry crowds gathering in the tourist district on the Kowloon peninsula. Shouting “Fight for freedom! Stand with Hong Kong!” and singing “Glory to Hong Kong”—the song that many are calling Hong Kong’s “national anthem”—they headed up the tourist strip of Nathan Road. A small number continued on to the northern district of Kowloon Tong. They erected barricades across Waterloo Road—a major thoroughfare through the affluent suburb that was home to martial arts icon Bruce Lee and which has so far not been affected by the protests.

RTHK, Hong Kong’s government-funded broadcaster, reported that helmeted personnel unfurled a warning flag at protesters from inside the barracks of China’s People’s Liberation Army in Kowloon Tong. The personnel also trained spotlights on the crowd. It is thought to be the first time that Chinese troops garrisoned in Hong Kong have “engaged with protesters” during the unrest, RTHK said.

“The government is doing everything it can to restrict our freedom of assembly because it wants to end the protests,” said a protester named Eva, 50, when asked about the mask ban. “I don’t think it will end unless the army marches in,” she told TIME.

Marching alongside, her husband, 67, said that while he did not agree with violence “The youngsters feel they have no choice … the government made them.”

Protesters block a road during clashes with police in the Wanchai district in Hong Kong on October 6, 2019.
MOHD RASFAN—AFP via Getty Images

In the late afternoon, live news broadcasts showed protesters erecting barricades and besieging a large police station in central Kowloon. Police on the parapets fired rubber bullets to drive the crowd back. Mong Kok station, a major transport interchange, was flooded, and facilities were damaged at other subway stations. Fires were lit in the premises of mainland Chinese businesses and the offices of pro-Beijing legislators trashed. As night fell, police set up road blocks and began taking mostly young passengers off buses for searching and questioning, causing a major tailback.

RTHK also spoke to students from the Hong Kong Baptist University (HKBU) and Chinese University, who said that police had attempted to enter the campuses without authorization. “People living in HKBU halls are all on edge now, as there are rumors that police are coming to halls to arrest people,” one journalist tweeted. “They are telling one another to lock their doors.”

The latest demonstrations come in the wake of the most violent unrest Hong Kong has seen in over 50 years. Protesters rampaged across the city on both Oct. 1—China’s national day—and again on Oct. 4, when the government invoked the colonial-era Emergency Regulations Ordinance to ban the wearing of masks at public gatherings.

On both days, protesters fought running battles with police and caused widespread damage, with hundreds of arrests made. A teenage protester miraculously survived after being shot by police in the chest at close range. An undercover police officer, who drew his weapon to fire a warning shot but instead hit and wounded another teenage boy, was attacked by an enraged mob and narrowly escaped with his life after being momentarily set alight with a petrol bomb. Scores of other people were injured.

Hong Kong appeared shell-shocked for much of Saturday, with banks, shops, malls, and government facilities shut, runs reported on ATMs, and panic buying breaking out at the few supermarkets that remained open. Disturbances resumed in the evening at multiple locations as protesters continued to vent their anger at the mask ban.

“Why can police wear a mask? They say it’s to protect themselves. Why can’t we protect ourselves? We just want to fight for our rights. But they are trying to take even this right away,” Winta, a 17-year-old protester, told TIME.

Meanwhile, the United Nations High Commissioner for Human Rights, Michelle Bachelet, said Saturday that the extent of violence during Hong Kong’s four months of anti-government unrest warranted an independent probe. She called on Hong Kong authorities to launch an “effective, prompt, independent and impartial investigation” into the handling of the protests, which to date have led to more than 1,100 injuries.

Hong Kong’s political crisis was sparked by a now withdrawn extradition bill, which would have allowed the rendition of fugitives to mainland China for the first time. Opposition to the bill quickly grew into a repudiation of both the unrepresentative local government and of Beijing, which has labeled the movement a color rebellion. Many protesters are calling for self-determination or independence for the former British possession—which was retroceded to China in 1997 after 156 years of colonial rule—and appear prepared to escalate their actions.

“I don’t think it’s violence—these are methods to resist the government’s authoritarian power,” said Kelly, 25, when asked about the use of force by radical protesters. “No matter what happens, and what [the radicals do], we won’t split.” 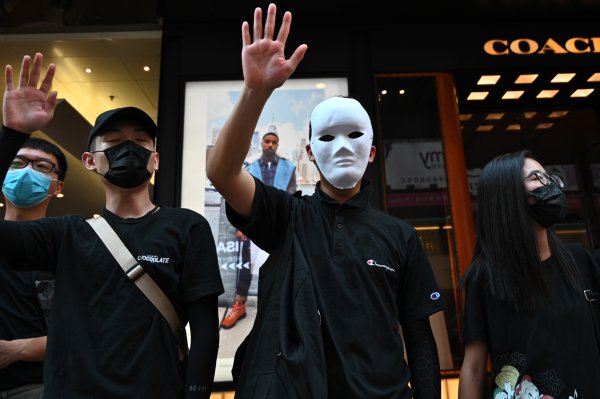