The Hong Kong teenager shot by police during anti-government protests on Tuesday is to be charged with rioting and assaulting police.

The news is sure to exacerbate tensions in the enclave, which is still recovering from its worst day of violence in over 50 years, and comes amid reports that the government intends to invoke emergency regulations to make the wearing of face masks at demonstrations illegal.

Tsang Chi-kin, 18, is scheduled to appear in Sha Tin court on Thursday afternoon, a court official told TIME. It was not immediately clear if Tsang, who is recovering in hospital, would be appearing in person or via video link, or be represented by counsel.

By the mid-afternoon, hundreds of Tsang’s supporters had gathered at the court, many of them high school students in uniform.

In the crowd was a 28-year-old civil servant, who spoke to TIME on condition of anonymity. “I want to tell the teenagers that I will always support you,” she said. “Many people are behind you, with you. This road is not easy to walk and we will always walk it with you.”

A 65-year-old local resident named Chan, who was outside the court, said: “I feel so sorry for them. They shouldn’t have to face this. I have kids myself, they don’t participate in protest so thankfully I don’t need to worry about them. But all of them inside, they are my kids too.”

As he prepared to enter the courtroom, a supporter named Jeffrey, 28, told TIME that the imposition of emergency regulations “is not going to scare us. We will find a way, and our protests will continue. We refuse to be intimidated by our authoritarian government.”

At the nearby campus of Chinese University, hundreds of students rallied in support of Tsang, who miraculously survived a police bullet at close range during a street battle on Oct. 1.

The decision to charge Tsang will “create a lot of problems” for the government, predicted Samson Yuen, assistant professor at the Department of Political Science of Lingnan University. “The government is dragging itself into an even bigger crisis.”

He told TIME: “The government definitely wants to set an example by giving swift legal punishment to the front line, militant protesters. Of course, when there are so many people sympathetic, you’re adding fuel to the fire.”

The banning of face masks at protests is similarly likely to inflame the situation. Local media reports that the cabinet of Hong Kong’s beleaguered top official, Carrie Lam, is meeting Friday to mull the proposal. Lam is under intense pressure from pro-Beijing political parties and organizations—as well as the territory’s largest police association—to invoke colonial-era emergency powers.

Tsang is the first protester to be hit with a live round during four months of unrest. His wounding has given fresh impetus to a movement seeking democratic reform and self-determination for the former British possession, which was retroceded to China in 1997 after 156 years of colonial rule.

Overnight, protesters across Hong Kong vented their fury at the shooting, erecting barricades, setting fires, and smashing the shopfronts of businesses with mainland Chinese connections. Petrol bombs were hurled at a suburban police headquarters. Hundreds of office workers also marched through the city’s financial district yesterday afternoon to decry the shooting.

Hong Kong has been roiled by four months of unrest. Early demonstrations against a now withdrawn extradition bill, which would have allowed the rendition of fugitives to mainland China for the first time, have rapidly grown into a revolt against the unpopular local government and a repudiation of Beijing. 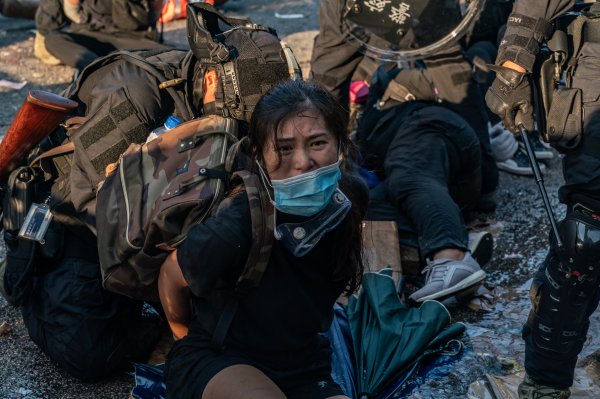 Hong Kong Rocked by Worst Unrest in Decades
Next Up: Editor's Pick