'The Reboot of US-UKRAINE Relationship.' Here's What To Know About Newly-Released Texts Between Trump Diplomats and Ukrainian Presidential Aide

Kurt Volker, former U.S. envoy to Ukraine, leaves the Capitol after delivering hours of testimony to the House intelligence committees in Washington, D.C., on Oct. 3, 2019.
Gabriella Demczuk for TIME
By Abby Vesoulis

The release comes as part of House Democrats’ impeachment inquiry into President Donald Trump, following the whistleblower’s claim that he used his office to “solicit interference from a foreign country in the 2020 U.S. election.”

Volker, who resigned last week, voluntarily testified in front of lawmakers for nearly ten hours on Thursday, and submitted the texts for their review. Sondland will appear for a closed-door deposition on Oct. 8, according to CBS News.

In a tweet, Oversight Committee Republicans criticized their Democratic peers’ decision to share what they called “cherry-picked documents.” The chairs acknowledged the texts are only a “subset of the full body of the materials” they received, but say they hope to release everything once it’s been vetted.

In the exchange widely seen as the most damaging, Volker seemed to imply a quid-pro-quo arrangement ahead of Trump’s now-infamous July 25 call with Zelensky, in which Trump asked him to work with Giuliani and Attorney General William Barr to look into the origins of the Russian election probe, and the work Joe Biden undertook in Ukraine as Vice President while his son Hunter was on the board of Burisma, a Ukrainian energy company.

“Heard from White House — assuming President Z convinces trump he will investigate / ‘get to the bottom of what happened’ in 2016, we will nail down date for visit to Washington,” Volker wrote to Yermak.

While Trump has freely admitted that he wanted Zelensky to investigate the Bidens, and released the transcript of the call with his Ukrainian counterpart because he thought it would lay bare that he did not link aid money to an investigations, an explicit quid-pro-quo discussion made on his behalf is likely to make the burgeoning impeachment crisis that much harder to fight.

It is not illegal for one country to solicit help from another; however, as Federal Election Commission Chair Ellen Weintraub first noted in June, seeking foreign intervention in a U.S. election is against the law. “Let me make something 100% clear to the American public and anyone running for public office. It is illegal for any person to solicit, accept, or receive anything of value from a foreign national in connection with a U.S. election,” she said. In this vein, Trump’s focus on a potential 2020 rival, Biden, could potentially be viewed as attempting to affect the election.

In another chain of messages on Aug. 9, Sondland and Volker discuss the timing of what was a then-prospective White House visit, set to be scheduled “as soon as Yermak confirms.” Texts that follow seem to refer to a “deliverable” allegedly requested by President Trump — a written statement in which Zelensky would announce that Ukraine was investigating 2016 election interference and whether malfeasance was involved in an investigation into Burisma.

“Once we have a date, will call for a press briefing announcing upcoming visit and outlining vision for the reboot of US-UKRAINE relationship, including among other things Burisma and election meddling in investigations,” Yermak wrote to Volker on Aug. 10.

Volder and Sondland proceeded to discuss the specifics of what the press statement should include on both Aug. 13 and 17, sharing passages they expected it to include.

“Special attention should be paid to the problem of interference in the political processes of the United States especially with the alleged involvement of some Ukrainian politicians. I want to declare that this is unacceptable. We intend to initiate and complete a transparent and unbiased investigation of all available facts and episodes, including those involving Burisma and the 2016 U.S. elections, which in turn will prevent the recurrence of this problem in the future,” Sondland said in the first conversation which Engel, Schiff, and Cummings say occurred after Volker had reached out to Giuliani for guidance.

In the follow-up exchange on Aug. 17th, Sondland tells Volker he wants Ukraine to send them a “clean draft” of the statement.

That statement in question has not yet been released. (Ukraine’s prosecutor general’s office did announce Friday it would reinvestigate Burisma; however, the prosector said, “No foreign or domestic politicians… tried to influence my decision.”)

Instead, at the end of August, Yermak texted Volker an article about Trump’s decision to withhold congressionally approved military aid from Ukraine, which was ultimately released Sept. 11. “Need to talk to you,” Yermak said. “Hi Andrey — absolutely. When is good for you?” Volker responded on Aug. 29. At the time, Trump was scheduled to go to Poland and meet with Zelensky, but said he had to stay Stateside to monitor the trajectory of Hurricane Dorian. Vice President Pence met with Zelensky on Sept. 1 in Trump’s place.

The same day, Taylor sent a message to Sondland questioning what would be required for Zelensky to get his White House invite. “Are we now saying that security assistance and WH meeting are conditioned on investigations?” wrote Taylor. Instead of answering via text, Sondland told Taylor to call him.

The subject of withholding aid for campaign assistance, as Taylor appeared to view the situation, came up again about a week later. “As I said on the phone, I think it’s crazy to withhold security assistance for help with a political campaign,” wrote Taylor.

It took Sondland five hours to reply to Taylor’s concern. In a pointed message, he denied the suggestion that Trump was leveraging anything in return for Zelensky’s commitment to investigate, and suggested the officials should stop communicating about the matter over texting. “Bill, I believe you are incorrect about President Trump’s intentions,” he wrote. “The President has been crystal clear no quid pro quo’s of any kind. The President is trying to evaluate whether Ukraine is truly going to adopt the transparency and reforms that President Zelensky promised during his campaign.”

“I suggest we stop the back and forth by text,” Sondland added.

His response was the final message the committee chairmen shared publicly. 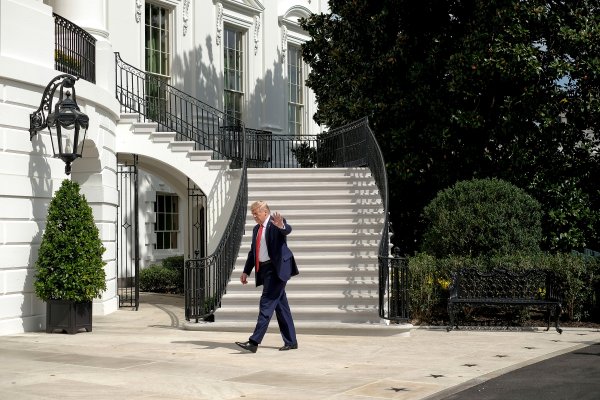