WASHINGTON, DC - SEPTEMBER 30: U.S. President Donald Trump gives pauses to answer a reporters' question about a whistleblower as he leaves the Oval Office after hosting the ceremonial swearing in of Labor Secretary Eugene Scalia at the White House September 30, 2019 in Washington, DC. (Photo by Chip Somodevilla/Getty Images)
Chip Somodevilla—Getty Images
By Brian Bennett and Abby Vesoulis

When President Bill Clinton was facing impeachment over obstruction and perjury allegations from a Republican-led House, he had a war room of skilled legal and communications connoisseurs tasked with handling rapid response on the topic. Clinton and the rest of his staff, meanwhile, were supposed to carry on business as usual and avoid discussing the matter — as if the President of the United States hadn’t just been caught having an inappropriate relationship with 22-year-old White House intern Monica Lewinsky.

As the current White House rushes to manage the fallout from President Donald Trump’s July phone call with Ukrainian President Volodymyr Zelensky—in which Trump mentioned the United States’ generosity to the Eastern European country before asking Zelensky to investigate matters that might benefit his 2020 campaign—Trump now must decide whether his team handles his own impeachment controversy the same way.

Trump’s close aides have conflicting opinions on the matter. While some argue that the President has done nothing wrong and need not assume a defensive posture in light of fallout from the Trump-Zelensky phone call, others are making the case that now is the time to build a war room similar to Clinton’s to get ahead of the impending crisis. “Bring people on. Go to war. Go to fucking war. That’s what this is,” one White House official told TIME about the possibility of calling in additional help.

Though the conversation in question is what ultimately tipped the scale for House Speaker Nancy Pelosi to launch a formal impeachment inquiry on Sept. 24 against the President after months of inaction, Trump “doesn’t have a guilty conscience,” about the conversation, a second White House official says.

Trump’s insistence that he did nothing wrong undoubtedly played into his decision to release the rough transcript of the call in the first place, thinking it would lay bare that he hadn’t linked aid money to the investigation of former Vice President Joe Biden and diffuse the story. The position might also be why the White House hasn’t assembled a war room of its own already.

Internally, White House counsel Pat Cipollone has argued that the responses to impeachment investigations can be handled “in house” without building a large team of lawyers and spin doctors to run rapid response for the next year. Trump’s personal lawyer Jay Sekulow has echoed that view. That view, says the second White House official who spoke to TIME on the condition of anonymity to describe internal deliberations, takes the approach that “there’s nothing to see here. No need to panic and let’s let this all unfold. If we do anything unusual it will telegraph panic and worry.”

But another camp inside the White House is arguing to go “full flame offense” against the Democrats, hitting back with opposition research, leaks, and pushing forward with policy initiatives on prescription drugs and guns that would serve to highlight the Democrats’ inaction. Under that plan, says a third White House official, aides have floated bringing back a steely veteran like Emmet Flood who handled the White House legal response to the Mueller investigation, or someone with similar chops. Flood would be especially well-positioned to take on the war-room role, having participated in Clinton’s.

“This isn’t a trial. You don’t get a second act. You don’t get a motion to reconsider. You don’t get an appeal,” the third official says. “It’s existential.” A war room could be ready to go on defense against accusations like those of Trump’s former Homeland Security Advisor Tom Bossert, who said Sunday on ABC’s This Week that he was “deeply disturbed” by the implications of Trump’s call with the Ukranian president. A team of crisis professionals might have also taken a different approach against House Intelligence Committee Chairman Adam Schiff rather than accuse the Congressman of acting “illegally” after the California Representative parodied Trump’s phone call during a congressional hearing.

At least 60 new Democrats in the House — many of which represent moderate districts and have re-elections to worry about — have announced their support for an impeachment inquiry since Sept. 23. Support for Trump’s removal from office, meanwhile, jumped 10 points post-Pelosi’s announcement to 47%, with a margin of error plus or minus of 3.2 percentage points, according to back-to-back Quinnipiac University polls taken in the days immediately before and after her announcement.

Handling the situation à la Clinton would require the President leave the burgeoning battle to the war room and instead direct his energy towards policy priorities like the trade war and conservative court appointments. But Trump seems less than likely to give up publicly defending himself to 65 million Twitter followers as he faces the greatest threat to his presidency yet.

He had spent the weekend stewing in private and online about the fallout from his 30-minute phone call that occurred two months earlier and lashing out against his Democratic opponents, the intelligence officer who blew the whistle and the press in between rounds of golf at his private club in Sterling, Va.

Before leaving the White House to attend the installation of a new Chairman of the Joint Chiefs of Staff at a historic Army base on Monday morning, Trump had a few things to get off his chest. “The Greatest Witch Hunt in the history of our Country!” Trump tweeted just after sunrise Monday morning. “Arrest for Treason?” he tweeted in regards to Adam Schiff a half-hour later. 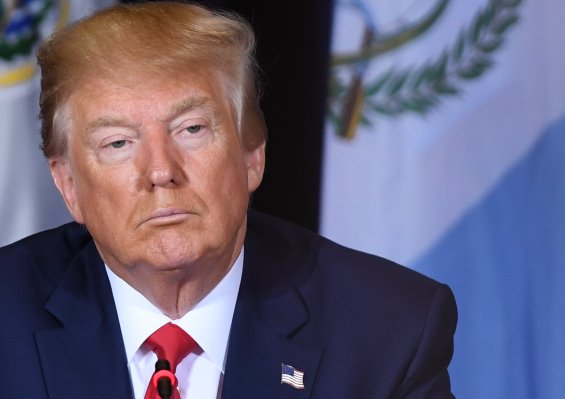 Read the Declassified Trump Whistleblower Complaint
Next Up: Editor's Pick