'God Is Not Going to Put It in Your Lap.' What Made Fannie Lou Hamer’s Message on Civil Rights So Radical—And So Enduring

In recent years, amid increasing white supremacist violence and a disturbing run of mass shootings, “thoughts and prayers” have been offered again and again. They may well soothe hearts and minds. But activists have also pushed back against the idea that they provide any solution.

That same idea was powerfully articulated more than half a century ago by Fannie Lou Hamer, a civil rights activist born on Oct. 6, 1917.

“You can pray until you faint, but if you don’t get up and try to do something, God is not going to put it in your lap.” With characteristic aplomb, Hamer delivered these powerful words at a mass meeting in Indianola, Miss., in September 1964.

Hamer’s bold message—that each of us has the responsibility to work toward the just and equal society we envision—left a lasting impression on those in attendance that evening at Indianola’s Negro Baptist Church. The fact that Hamer would tell a room filled with religious people that prayer only went so far revealed the depth of her fearless activism.

Hamer’s bold message to “get up and try to do something” was one that all Americans committed to change needed to hear in 1964.

Hamer’s own experiences underscored this point. Born in Montgomery County, Miss., Hamer worked as a sharecropper for much of her life. It was only in her 40s, while attending a mass meeting at a local church, that she first became aware that black people had been granted voting rights by the U.S. constitution. “I had never heard, until 1962, that black people could register and vote,” she later explained. During the early 1960s, she became a civil rights activist, working alongside members of the Student Nonviolent Coordinating Committee (SNCC)—an interracial civil rights organization—in the Mississippi Delta. She became a SNCC Field Secretary in 1963 and traveled around the country speaking and registering people to vote.

In April 1964, Hamer joined forces with other activists in the state to establish the Mississippi Freedom Democratic Party (MFDP), which challenged the all-white Mississippi delegation to the Democratic National Convention (DNC). Despite the passage of the 14th and 15th amendments during the 19th century, only five percent of Mississippi’s 450,000 Black residents were registered to vote in 1963. Hamer and fellow MFDP activists set out to ensure greater black representation in the state’s Democratic Party. They were also determined to expand voter registration by making black people aware of their rights as citizens of the United States.

White supremacists in Mississippi had done everything in their power to block black people from exercising their right to vote, from the creation of poll taxes and literacy tests to rampant acts of violence, terror and intimidation. When Hamer became aware of her constitutional rights, she was determined to use them. But even more, she wanted to ensure that others would also benefit from this knowledge. During the early 1960s, Hamer volunteered to assist SNCC activists with voter registration—ignoring the threats of violence from white supremacists in her community. “The only thing they could do to me was to kill me,” she noted, “and it seemed like they’d been trying to do that a little bit at a time ever since I could remember.”

In a fiery speech at the DNC in Atlantic City on Aug. 22, 1964, Hamer recounted the many times white supremacists targeted her life—and the lives of those she loved—simply because of her determination to exercise her voting rights. She spoke of the brutal beating she endured at the hands of police officers in 1963, when she and other traveling activists made a stop in Winona, Miss., simply to grab a bite to eat. She also painfully recounted the night white supremacists in Ruleville, Miss., sprayed 16 bullets into the house where she resided with friends—bullets meant especially for her.

And yet there Hamer stood in September 1964 at a mass meeting in Indianola—undeterred and committed to the fight for equality as ever before. She encouraged attendees to exercise their right to vote and not to sit idly by in the face of injustice. She understood the challenges ahead and she empathized with the fear, and even hopelessness, many felt that evening—and still feel today. The fight for equality seems never-ending and the roadblocks are many, but Hamer’s words offer much-needed guidance, direction and determination: faith without action is dead. 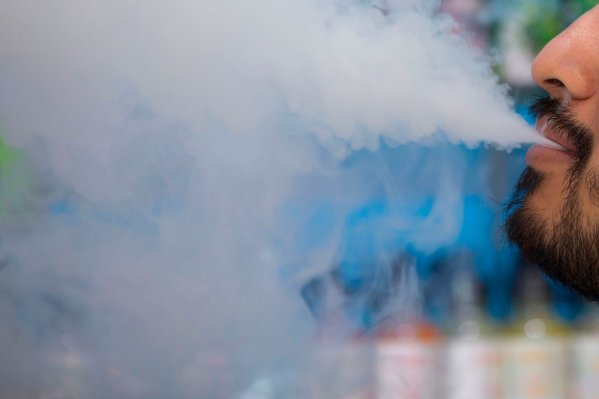 How the Vaping Industry Is Using a Defensive Tactic Pioneered Decades Ago by Big Tobacco
Next Up: Editor's Pick