Two Canadian photographers are facing criticism for sharing a Handmaid’s Tale-themed wedding photo, staged where scenes of the show have been filmed in Cambridge, Canada.

The picture shows a man and woman kissing — flanked on either side by a row of the show’s handmaids — in front of a wall that the show’s fictional Gilead leaders use to hang dead bodies of dissenters. While the wall is the one used on the show, Van Daele says he photoshopped in the handmaids, clad in their iconic red dresses and white bonnets.

Thousands of social media users quickly commented on and shared the image with question marks, jokes and concern.

But the photographers are defending the shot.

“Everyone loves a good witch hunt,” Shawn Van Daele, one half of Van Daele and Russell photography, told TIME in an email. “Apparently today we are their witch.”

The photographers removed the photograph from their social media at the request of the couple after it went viral on Facebook. “They’re being harassed,” Van Daele says, “which is an absolute shame.”

In both the book of the same name by Margaret Atwood, and the Hulu series, the titular handmaid characters are forced to bear the children of men whose wives are infertile, and being gay is illegal. While many critics felt the photo made light of The Handmaid’s Tale‘s dark themes, Van Daele says that he and his husband, Clint Russell, had only good intentions.

“The image and entire show touches on the oppression faced by the gay community, women, and many other minority groups,” he said. “It’s deeply personal, and a shame people are attacking without first learning.”

The wedding itself was not at all Handmaid-inspired. Because both the photographs and the bride and groom are huge fans of the show, and they were shooting on-site at Cambridge Mill, it seemed fitting.

The Handmaid’s Tale has had an impact on the real world, from protesters wearing the costume as a symbol of women’s oppression, to outrage over a sexy handmaid Halloween costume. Van Daele said that while he’s upset by the criticism, he’s happy that people are just as inspired and invigorated by The Handmaid’s Tale as he is.

“We’re thrilled that this is starting a conversation,” he said. 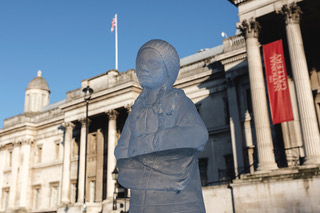 '#GretaIceberg.' Here's the Story Behind the Ice Statue of Greta Thunberg Swiftly Melting Today
Next Up: Editor's Pick