The Legend of Zelda: Link's Awakening Is a Nostalgia Trip Worth the Price

I awoke on a foreign shore after a terrible storm. My sword and shield — constant companions through countless adventures — were gone, and I was in a strange house with a man who looked oddly like Mario. His red-haired daughter told me I was on Koholint Island, and that I’d find my weapons on the beach where I washed ashore. Koholint Island was dreamlike and weird, but I soon fell into the familiar rhythm of exploring dungeons and collecting strange artifacts to help along my journey.

This is The Legend of Zelda: Link’s Awakening, out now for Nintendo Switch. It’s a remake of a game by the same name that Nintendo released on the original Game Boy in 1993, and a spiritual sequel to 1991’s The Legend of Zelda: A Link to the Past for the Super Nintendo. Nintendo originally planned to port the SNES classic to the Game Boy, but Link’s Awakening changed into something stranger during development.

Link’s Awakening is both a throwback to the best Zelda games of the ’90s and an original twist on the classic formula. Like those old school games, Link navigates a 2D isometric world, exploring dungeons and gathering items that let him progress through previously impassable obstacles. For example, Koholint Island is littered with huge rocks, and Link can only lift them after he’s found a bracelet in the second dungeon. Classic Zelda gameplay.

But unlike many old-school Zelda games, there’s no Zelda, no Triforce, no Gannon, and no Master Sword. A large part of the charm of Link’s Awakening is that it diverges from so many of the classic Zelda tropes while remaining true to the spirit of the classic adventure series.

Koholint Island is a weird place full of little nods to classic Nintendo characters. A woman in town keeps Chompers, from Super Mario Bros., as pets. Dr. Wright, the green-haired guide of SimCity on the SNES, is trading love letters with a goat in a village across the island. Link’s goal is not to escape the island per se, but to collect seven instruments that will allow him to play a melody that will crack open an egg at the top of a mountain and awake a deity-like fish who is dreaming up the entirety of Koholint Island.

When I was young, Link’s Awakening was my favorite Zelda game, and returning to Koholint Island for another run has been comforting. The Switch port is more than just a rough transfer of an old game to a new system — Nintendo has worked magic to update the game’s graphics and sound. The distinct music of the Zelda series was relegated to MIDI bleeps and bloops on the original Game Boy. On the Switch, the orchestral soundtrack of Link’s Awakening soars and Zelda’s original theme is rendered gorgeously on strings and woodwinds. The game looks incredible, too. Similar to Yoshi, everything in Link’s Awakening looks like it was designed by Playmobil, and the edges of the screen blurred as if I were looking down on Link in a toy box through the haze of memory.

It’s a striking effect, but beauty has its price. Inside dungeons and the houses of villagers, Link’s Awakening runs like a dream. In the overworld, however, the game frequently slows down and stutters. The Goponga Swamp, an early area in the game, suffered from frequent frame rate problems. These problems occurred in both handheld and docked mode on the Nintendo Switch.

Link’s Awakening also comes with a Chamber Dungeons feature that lets players design and play through their own dungeons. It’s billed as Zelda’s version of Super Mario Maker, but it lacks that title’s charm and sophistication. The Chamber Dungeon feature opens pretty early in the game, but new pieces aren’t added to the mix until after Link completes each of the game’s nine main dungeons. Once the tiles from a dungeon are unlocked, Link can speak to a gravedigger NPC to arrange the tiles and play through a custom dungeon. The problem is that every tile was one I’d already completed in a different dungeon — the only thing that really changed was the order. It’s less a create-your-own-dungeon tool and more a way to remix old content. Nintendo crafted those original dungeons so well that the remixes never quite work. Thankfully, the chamber dungeons are optional.

All told, $60 might seem like a steep price for an update to a 25-year-old game, but the changes are more than just a coat of paint, and old-school Zelda fans as well as newcomers will find something to enjoy here. 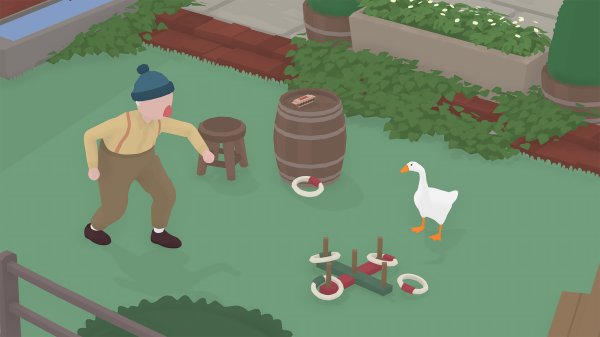 Everyone's Tapping Into Their Horrible Side Thanks to the Consequence-Free Untitled Goose Game
Next Up: Editor's Pick