Trump Will Fail on China Trade War, but Progressive Democrats Must Carry On the Fight

Ideas
By Rober Kuttner
Kuttner’s new book is The Stakes: 2020 and the Survival of Economic Democracy. He is co-editor of the American Prospect and teaches at Brandeis.

President Trump has now delayed imposition of $250 billion worth of tariffs on China yet again, from October 1 to October 15, as a supposed goodwill gesture. This will only confirm Beijing’s view of Trump as weak, vacillating, and easily manipulated.

Of all the issues where Donald Trump sought to upend established U.S. policy, his tough stance on trade was the most promising. The traditional view of “free trade” as virtuous and “protectionism” as self-defeating no longer described how most nations pursued economic advantage.

While trade theorists exhorted the US and its partners to practice free trade, China was cleaning America’s clock with an unapologetic strategy of mercantilism. Contrary to free trade doctrine, which holds that protection harms nations that practice it by denying their producers bracing competition and their consumers the world’s best and cheapest products, China’s state-led mercantilism, like that of Japan and South Korea before it, has worked brilliantly.

The usual story of free trade is static, a snapshot of price and quality at a point in time. In that account, government subsidies or import barriers are sheer economic waste. But policymakers in nations like China know that the real economy is dynamic. If a few decades of subsidies and trade barriers allow you to create and capture advantage, in an array of sectors ranging from steel to aircraft to cutting edge digital technologies, the long-term gains more than offset the temporary cost of the protection. And China has been playing a long game for millennia.

As Trump appreciated, the bi-partisan consensus on trade no longer served the US national interest–unless you defined the national interest simply as what was good for multi-national corporations. Loss of domestic industry was a genuine problem, both because of national security concerns and the rising trade imbalance.

These realities in turn made economic nationalism smart politics for Trump as well as plausible policy. Working class Americans, normally a reliable part of the Democratic Party base, were displaced and aggrieved.

So Trump was primed to steal both a key economic issue and a key portion of the Democratic base. He also made one of his best hires when he brought on Robert Lighthizer as architect of trade policy and chief negotiator. Lighthizer, whose public career began as a trade negotiator under Ronald Reagan, has long been a well-informed critic of self-defeating U.S. trade policy.

But it’s increasing clear that Trump has blown the opportunity to reset trade policy and politics. The long-sought China deal is getting away from him. He has alienated allies who he needs in a common front against China, by using tariffs against multiple nations in scattershot fashion rather than with strategic focus. With the global economy softening, a full-blown trade war with Beijing could deprive Trump of his strongest election year issue by pushing the U.S. economy into recession.

What happened? China diplomacy was never going to be easy. Beijing is wedded to its mercantilist system. China is increasingly able to pursue leadership in sector after sector, even without stealing trade secrets. As China both globalizes and deepens its domestic market, Beijing is no longer so reliant on US imports. The moment of maximum US leverage has passed.

Had Lighthizer been working for a normal president, he just might have pulled off a grand bargain in which China mended some of its more extreme predatory ways, cut some side deals to buy more of our exports, and the US called off the trade war. But Trump’s inconsistent bombast made Washington an unreliable negotiating partner, and left the Chinese even more determined to go their own way.

In August of 2017, I had my proverbial fifteen minutes of fame when I received a surprise phone call from Steve Bannon, then Trump’s chief political strategist. Bannon had tutored Trump’s on the use of white nationalist rhetoric combined with a tougher strategic trade policy. Bannon was calling because he had read a column of mine partly endorsing Trump’s China policy. Bannon was looking for allies on the left.

In the course of the conversation, which Bannon never bothered to put off the record, he said several withering things about his boss. When I published the interview in the American Prospect, Bannon got fired.

But on the subject of trade, the superficial left-right convergence is highly misleading. The left believes in activist domestic government; the right doesn’t.

Economic nationalism in the spirit of FDR is all about domestic rebuilding. For Bannon and Trump, it’s about bashing foreigners.

Trump’s incoherence on the trade issue is partly personal style but also reflects a deeper split between the nationalist far right and the corporate right. Some of America’s corporations file complaints against China’s intellectual property theft and its “dumping” (pricing exports below their cost). But most of America’s corporate elite is part of the globalist consensus–because global trade deals undermine domestic regulation and provide handy access to a cheap and docile offshore workforce.

Though they grouse at China’s terms, many multinational corporations have made a separate peace with China–profiting from China’s large subsidies for new factories and its docile workforce, and suffering the demands for to take on Chinese “partners” and tech transfers as a cost of doing business. So Trump’s brand of economic nationalism divides his own constituency.

If a progressive Democrat, such as Elizabeth Warren or Bernie Sanders, is the next president, initiative on the trade issue will pass to the Democrats. Warren and Sanders represent as radical break with the free trade consensus as Trump does, but a far more cogent one.

The irony is that America already has tacit industrial policies. DARPA has incubated technological leadership in the digital economy, just as NIH spending has made America a powerhouse in biotech. But because of America ideological commitment to free-trade, we deny that these are counterparts to the targeted policies of other nations. Warren or Sanders would bring a coherence to a very different trade policy, and define a constructive economic nationalism without the racism.

Trump has usefully demolished the rickety edifice of free trade. His ideological and partisan opponents may get to pick up the pieces. 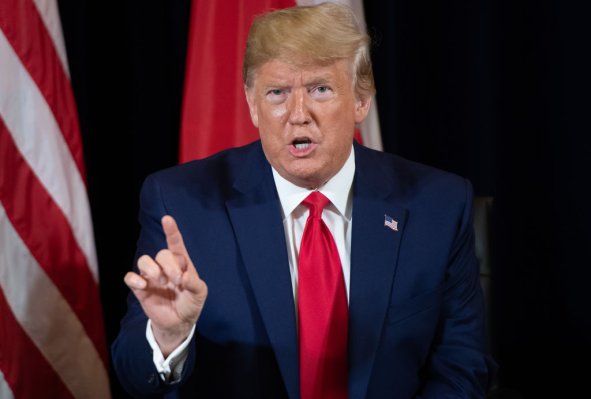