A Trump Administration delegation headed to China this week to negotiate an end to the trade standoff between the two countries includes three Cabinet level officials, two senior advisers and one prominent ambassador.

But the group lacks one essential element: a clear set of demands for their Chinese counterparts. To deliver a win for the White House on trade in China and elsewhere, senior administration officials will first need to negotiate among themselves.

The key split in the delegation lies between the hardliners who are skeptical of China and want to push for deep concessions and more moderate officials who are more likely to accept modest concessions from Beijing. The China trade hardliners headed to Beijing include Trump trade advisor Peter Navarro and U.S. Trade Representative Robert Lighthizer while Treasury Secretary Steve Mnuchin and economic advisor Larry Kudlow are more likely to accept China’s concession.

“There doesn’t seem to be a comprehensive, coherent U.S. request to China,” says Wendy Cutler, a former U.S. trade negotiator who is now a managing director at the Asia Society Policy Institute, a think tank. “There are so many people on the U.S. delegation that it leads me to believe that it will be characterized by both sides putting down many markers in terms of what they may be able to do, what they won’t do and what issues are of primary concern.”

Trump’s stated demands — namely, that China reduce the country’s trade surplus to the U.S. by $100 billion and that the country end its plan $300 billion plan to build a high-tech sector known as Made in China 2025 — will likely be dismissed out of hand Beijing. Instead, the country has offered to open its auto and financial sectors, according to a New York Times report earlier this week. China has already announced related concessions this year, including allowing U.S. auto companies access to the Chinese market without a local partner.

Trump has indicated those moves will not be enough saying on Twitter this week the “Massive Trade Deficit” with China “should have been fixed years ago, not now.”

The tensions with China are not the only trade negotiation where Trump and his advisors are still deciding what they will accept. Trump announced tariffs on steel and aluminum in early March but delayed implementing them in the European Union, Canada and Mexico following an outcry from business leaders and key allies. This week, he again delayed for a month the tariffs targeting those countries with the White House saying the administration would focus on “quotas that will restrain imports” in ongoing talks.

When the Trump Administration announced its first slew of tariffs earlier this year it seemed that the administration was ready to abandon decades of U.S. support for free trade. Some tariffs have taken effect to be sure, including the steel and aluminum measures in countries that did not receive an exemption and tariffs targeting solar panels and washing machines. But on many of the most significant trade issues, it remains to be seen how far the Administration is willing to go.

Similarly, on NAFTA, the Administration has walked away from Trump’s campaign threat to walk away from the free trade deal. Months of renegotiations have come down to the wire with rules about the origin of material used in cars remaining a major sticking point. The Administration said this week it expects a deal by mid-May.

“These have morphed into levers, cudgels, whatever you want to call them,” says Mary Lovely, senior fellow at the Peterson Institute for International Economics and a professor of economics at Syracuse University of the administration’s trade threats. “We’ll see what’s left in the end.” 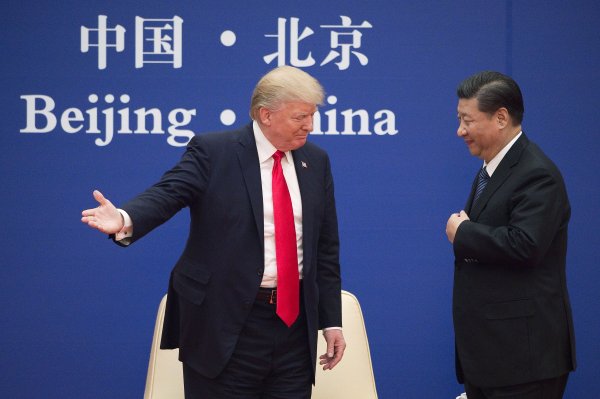 Trump 'Thankful' for Xi's Softening on Trade
Next Up: Editor's Pick