The nation’s highest-ranking intelligence official defended his handling of a “unique and unprecedented” whistleblower complaint against President Donald Trump in front of the House Intelligence Committee on Thursday morning, in the middle of a fierce showdown between Congress and the White House that has triggered impeachment proceedings against the president.

Joseph Maguire, the acting Director of National Intelligence, is facing intense scrutiny over his handling of an intelligence community whistleblower complaint that raised alarm about a phone call between Trump and Ukrainian President Volodymyr Zelensky—during which Trump asked Zelensky to investigate Joe Biden, who has consistently been a 2020 frontrunner, and his son Hunter’s business dealings in the country.

The summary of Trump’s call with Zelensky, which was released on Wednesday, “reads like a classic organized crime shakedown,” House Intelligence Committee Chairman Adam Schiff said at the hearing. “It would be funny it wasn’t such a graphic betrayal of the President’s Oath of Office.”

The California Democrat chastised Maguire for standing “silent when an intelligence professional under your care and protection was ridiculed by the president, was accused of potentially betraying his or her country when that whistleblower by their fact of coming forward has shown more dedication to country…than the President has ever demonstrated.”

House Democrats pressed Maguire to explain why he withheld the intelligence community whistleblower report from lawmakers for weeks. The retired Navy vice admiral, who only stepped into the role last month, became the face of the controversy over the whistleblower report when his office refused to comply with a deadline to hand over the complaint to Congress, which the intelligence community inspector general had deemed “credible and urgent.”

Maguire defended his decision not to share the whistleblower complaint with congressional intelligence committees, as required by law, saying it may have been covered by executive privilege. He noted repeatedly that he had sought advice from White House and Justice Department lawyers.

“I am not partisan, and I am not political,” Maguire told lawmakers, insisting he supported the rights of the whistleblower. “My integrity has never been questioned until now.”

Some Republicans also said they were uncomfortable with the revelations.

“I want to say to the president: this is not OK. That conversation is not OK,” Ohio Republican Rep. Mike Turner said. “And I think it’s disappointing to the American public when they read the transcript.”

“I have received information…that the President of the United States is using the power of his office to solicit interference from a foreign country in the 2020 U.S. election,” the whistleblower, whose identity is being protected, wrote in the report. He alleged that not only did Trump improperly ask Zelensky to investigate his political rival, but White House officials were engaged in a cover-up in which they removed the transcript of the call into a more secure system only meant for sensitive classified information.

The report notes that Trump’s personal lawyer, Rudy Giuliani, “is a central figure in this effort” and “Attorney General [William] Barr appears to be involved as well.” Giuliani has defended his work and denied wrongdoing while the Justice Department has denied that Barr communicated with Ukraine.

The whistleblower said White House officials “told me that they were ‘directed’ by White House lawyers to remove the electronic transcript from the computer system” in which they are usually stored, and put into a different system for highly classified information. The whistleblower said an official called it “an abuse of this electronic system because the call did not contain anything remotely sensitive from a national security perspective.”

Maguire, a decorated Navy SEAL with a 36-year military career who until a month ago was serving as the head of the National Counterterrorism Center, is someone who former colleagues describe as “not a political hack.” While he has said he will do his duty in his open and closed meetings on Capitol Hill on Friday, he is walking a delicate line between the demands of lawmakers and Trump, who is sure to be watching.

He has denied reports that he threatened to resign if the White House forced him to stonewall Congress.

“At no time have I considered resigning my position since assuming this role on Aug. 16, 2019,” he said in a statement on Wednesday. “I have never quit anything in my life, and I am not going to start now.” 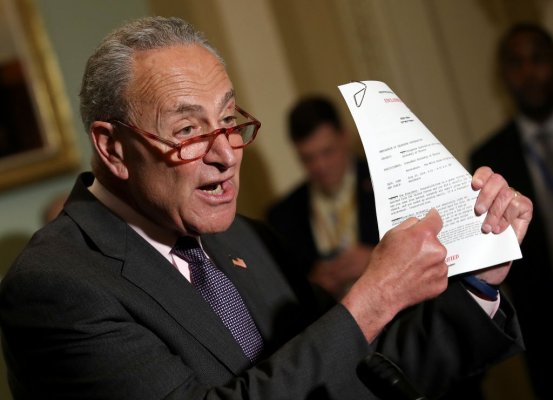