'Nobody Pushed Me.' Ukrainian President Denies Trump Pressured Him to Investigate Biden's Son

Ukrainian President Volodymyr Zelensky sat beside President Donald Trump on Wednesday as he denied that Trump pressured him to investigate former Vice President and current 2020 presidential candidate Joe Biden’s son for his work in the country.

The two leaders held a meeting at the U.N. one day after Speaker Nancy Pelosi announced that the House would launch a formal impeachment inquiry into Trump following reports of the President’s phone call with Zelensky in July. Speaking to reporters on Wednesday, Zelensky declared that he had not been pressured during the July phone call, and insisted that he does not want to interfere in a foreign election. Earlier on Wednesday, the White House released a summary of the phone call, which is comprised of “notes and recollections” from staff assigned to listen to the call and is not a transcript of the call.

In one exchange from the White House memo, Zelensky thanks Trump for his support of Ukraine’s defense. Trump responds, “I would like you to do us a favor though” and asks for Ukraine to investigate a matter related to the 2016 hacking of Democratic National Committee servers.

“I think you read everything. I think you read text,” Zelensky said to the gathered reporters on Wednesday. “I’m sorry, but I don’t want to be involved to democratic, open elections of U.S.A. No, you heard that we had good phone call. It was normal, we spoke about many things. I think, and you read it, that nobody pushed me.”

“So no pressure,” Trump added.

President Trump has been embroiled in controversy since last week, when reports emerged that a whistleblower in the U.S. intelligence community had filed a complaint about a phone call between the two heads of state. An official said that the whistleblower “found troubling” “certain representations concerning U.S. policy” during the call.

Trump had previously admitted that he and Zelensky discussed former Biden’s son Hunter Biden during the phone call, but has denied that the call went into inappropriate territory and has insisted there was “no quid pro quo.” The Washington Post reported last week that Trump froze nearly $400 million in aid from the country at least a week before the July 25 phone call with Zelensky. The funds were eventually released on Sept. 11.

Taking questions in Ukrainian and English on Wednesday, Zelensky said that he doesn’t have the authority to pressure Ukrainian law enforcement, and did not attempt to do so.

“We have an independent country and independent general security. I can’t push anyone,” Zelensky said.

Trump again accused the former Vice President’s son of corruption, although this claim has not been substantiated with evidence. Joe Biden said this past weekend that he “never” spoke with his son about the younger Biden’s overseas dealings. 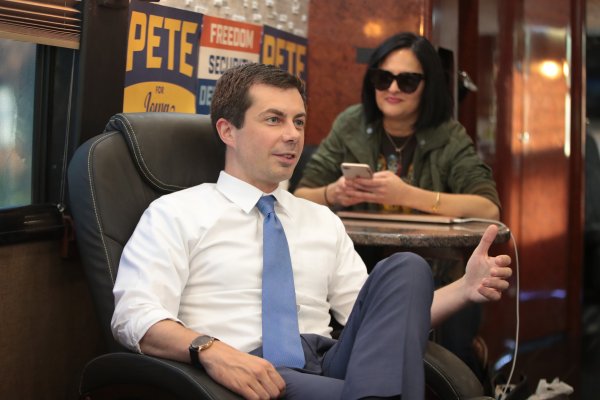 Four Days. One Candidate. Welcome Aboard the Buttigieg Bus
Next Up: Editor's Pick